Story of the Steipler, Tzadikim Knowing Things, and Potential Gerus 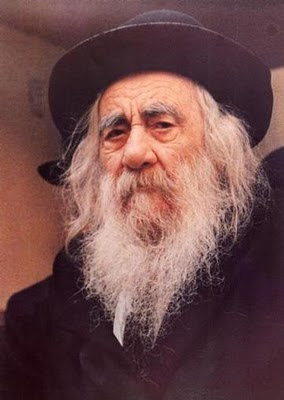 I saw this interesting quote from Y.Y. Rubinstein's new book That's Life, quoting a story from the Steipler Gaon that related to him "knowing things" that he couldn't naturally have known. The story also related to gerus in an interesting way. People who read my post on Tzadikim knowing our thoughts and actions (especially Snag!) will find this story particularly interesting. And those who remember our discussion on the difference between a Ger's soul before and after Gerus may be interested as well since the story discusses the difference between a Jewish and non-Jewish soul.

Very interesting story I once heard from Rav Baruch Rappaport, shlita, an example of the sort of thing that the Steipler “saw.”

Once, a bachur who had been learning in Bnei Brak came to the Steipler for a berachah. The young man had just become a chasan and he wanted his engagement blessed.

The Steipler looked at the young man and, instead of giving a berachah, told him to go and bring his rosh yeshivah. The boy was obviously distressed and shortly returned as requested. He was instructed to wait outside while the Steipler Gaon spoke to the rosh yeshivah.

The rosh yeshivah was astonished when the Steipler asked him, “Vi macht ir a shidduch mit a Yiddishe meidel and a goy? How do you come to sanction a match between a Jewish girl and a non-Jewish boy?”

The rosh yeshivah was dumbfounded. He protested that the boy was a Jew. He had personally known the boy’s parents in America for many years. They, like him, were very fine people. The boy was a talmid chacham possessed of good middos.

The Steipler was unimpressed and insisted that the young man was not Jewish. Inquiries were made, and indeed the Steipler was proved right. There had been a conversion that was in reality no conversion at all. The conversion occurred three generations before, through the maternal line. The parents were unaware of it, as was the bachur.

I never heard the conclusion of the story, but if he was as exceptional as his rosh yeshivah described, it would be easy to assume that an authentic conversion followed.
I did, however, hear of the question that the much surprised rosh yeshivah put to the Steipler Gaon after the truth had come out.

That was a very reasonable question indeed. The boy’s “genetic” makeup was overwhelmingly Jewish. He looked Jewish. He spoke Hebrew, Aramaic, and probably Yiddish, too. He learned well.

The Steipler was perplexed by the question and replied, “Er hot nicht gehat a neshamah! He had no neshamah.”

When I am teaching my students, I always draw an analogy with a truck. When the truck is empty, you will see one of the double sets of wheels at the back, raised off the road. When it is fully loaded, these extra wheels are lowered to help carry the heavy weights the truck has to transport.

Since Jews have an extra spiritual burden to carry - more mitzvos than non-Jews - they are given an extra spiritual component to bear it. That is a neshamah. The Steipler “saw” that the bachur who had come to seek a blessing did not have one.

Picture courtesy of Wikipedia. Click here to get Dixie Yid in your e-mail Inbox or here to subscribe in Google Reader.
Posted by DixieYid (يهودي جنوبي) at 6:00 AM

Imagine what an incredible person this young man must have been, bearing the full burden of a Torah life without those extra back wheels....

DY - Thanks for the plug!

Interesting story, but it is not the same as what we discussed the other time. There the topic was the wide-ranging blanket claim that 'tzadikkim' know thoughts and actions of people. Here the claim was different, that somehow, in a specific case, the Steipler z"l discerned the guy's religious status, namely not being Jewish.

Additionally, he may have discerned it through his chochmoh, his wisdom, chachmas haTorah, etc., (chacham adif minavi), rather than through 'supernatural' means.100% accurately, with all pertinent details, but that is another discussion....

Of course, in general, not every story is given over

*Of course, in general, not every story is given over 100% accurately, with all pertinent details, but that is another discussion....

Sounds like you're trying to make a square peg fit in a round hole...

Sounds like you're trying to make a square peg fit in a round hole..."

Nope, I'm pointing out a distinction, fair and SQUARE.

How does anyone know they are Jewish then if this kind of thing happens? This worries me all the time because I come from a family so secular you'd never believe we are Jewish.