From Uman to Manhattan - Going from the Sefer to the City 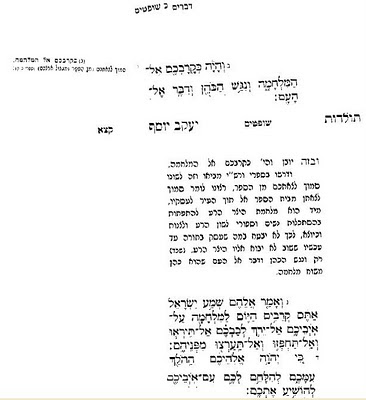 Sorry for not being more active recently. As my readers know, I am soon joining the world of "Biglaw". You also know that I am leaving for Uman today.

B"H I have received many many names from Jews (and even a Ben Noach) all over the world in the comments of my previous post and by e-mail. IY"H, BL"N, I will have you all in mind when I say the Tikun Klali and give tzedaka by Rebbe Nachman's tziyon, and by the other kivrei Tzadikim as well. I will not be able to take any more names as I will be pretty much incommunicado till I get back next Sunday.

I just received word last last week that I will be starting my new job the day after I return from Uman. This is much earlier than I was expecting. It's amazing how things work out together like that. IY"H this Rosh Hashana process should prepare me for the battle ahead.

Over Shabbos, I saw a Toldos Yaakov Yosef on Parshas Vayelech which which referred to something he said in Parshas Shoftim. He spoke so so clearly about this change that I'm about to embark on. While the job is a huge bracha, it is also contains overwhelming challenges. And this piece, which I have captioned on the right side of this post, offers amazing guidance and something for me to think about as I leave my current "learning vacation" and embark on my commute to, and work-life in, New York City.

He speaks on the pasuk in Parshas Shoftim, Devarim 20:2, which says, "And it will be that when you come close to the war, the Kohain will approach and speak to the nation." (captioned on the right)

I'll adapt the paragraph from the Toldos on that pasuk (captioned) into English: "The Torah says 'And it will be that when you come close...' The Sifri and Rashi (which brings the Sifri) explain that 'come close' refers to when the Jewish people come close to going out from the border ("s'far") of our enemies. This refers to when a person comes close to going out from the sefer [The word for border, s'far, has the same shoresh as the word for Torah book, sefer], and into the city to do business. Immediately, it is a war with the yetzer hara which tries to seduce a person into הסתכלות נשים, speaking gossip, cynicism, and the like. Therefore, one may not trust in the fact that he has been involved in learning Torah until now by [erroneously] thinking that the yetzer hara will not bother him. Instead, [the verse continues] 'the Kohain will approach and speak to the nation.'"

Anyone who goes to work has many challenges if he wants to try and keep his mind in kedusha. It's tough even for a person who has learned much better and longer than I have. In my case, I will even have to walk through (or near) Times Square every day from the train to my office. Sometimes avoiding הסתכלות נשים and the rest of it is so hard that it is easy to think it it is just better to give up. The task is fearsome and the tendency is just to want to stop fighting it and become misgashem like the surrounding, superficial world.

With this Toldos in mind, I went to look at how the psukim continue (also captioned above after the text of the Toldos). What is the chizuk that the Kohain gives the person who's leaving his sefer to go off on the Long Island Rail Road and walk through Manhattan? What does such a person need to keep in mind during that process?

The psukim (Devarim 20:3-4) continue with the Kohain's message: "And he says to them, 'Hear Israel: You are approaching today to make war on your enemy [the yetzer hara]. Don't become weak-hearted. Don't be afraid, don't panic, and don't be terrified of them because Hashem your G-d is going in front of you to fight for you with your enemies to save you."

As the Gemara in Kiddushin 30b says, if Hashem would not help us, we would not be able to beat our yetzer hara on our own ("ואלמלא הקב"ה עוזרו אין יכול לו")!

This is such amazing chizuk. I made the psukim, the Rashi, and the text of the Toldos itself, into a card. (Click the image to enlarge and print if you wish.) IY"H, when I get back from Uman I want to laminate it so I can read it before I get on the train every day, at least at the beginning, to remind myself to always ask Hashem to help me fight the big battle for me.
IY"H, we should all be zoche to renew our battle against the yetzer hara throughout the day every day, and we should be zoche to win in that battle and win on the Yom Hadin this week.

Hi Dixie Yid, this is Nosson Rossman, I just wanted to say I enjoy your blog and we have alot in common. We should catch up sometime, maybe when I'm in Bayswater I can walk over to you and we can shmooze in learning/chassidus. Enjoy the trip to Uman and ksiva v'chasima tova.

I can relate to this as I walk a very similar path 5-6 days a week. I have a handy little tip that I picked up. I can't recall if you wear glasses, but once you know your way well, take them off before you get off the train or leave the building.

If you don't wear glasses then consider picking up a pair of sunglasses.

It's small but every bit helps.

And I can honestly tell you since I've begun doing this my yetzer hara in this area has calmed down "a bit."

I would love to get together again. It has been a very long time. I will definitely take you up on your idea. Just e-mail me so we can exchange information and do that!

I have heard this idea before and my rebbe does that as well.

I wish I had thought of that when I got Lazik over 10 years ago!