I learned a lot over the Shabbos I just spent with the CEO of Amutat Netzach Yehuda, known colloquially as Nachal Chareidi, Rabbi Tzvi Klebanow. I also got to have, as a Shabbos seuda guest, one of the current chayalim in Netzach Yehuda, Nesanel Silverman, a bearded bochur from Brooklyn who joined Nachal Chareidi as a volunteer from America but has since made aliya. Here are a few of the things I learned about Nachal Chareidi:﻿﻿﻿﻿﻿﻿﻿﻿ 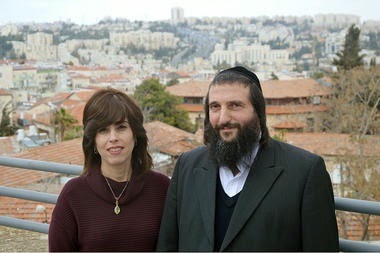 I'm excited about this program because it's one way, among many relatively new efforts, to get away from the unnatural policy of offering all boys exactly one choice about how they live their lives: long-term, full-time kollel learning. And if they're meant to do something else, for whatever reason, such a policy breaks people and is not the ratzon Hashem. One of those efforts is the relatively new Lomda Institute in Yerushalayim for vocational training founded by Rivka and Yaakov Yerusalvsky (pictured on the right). Another is the Chareidi campus at the Ono Academy, also in Yerushalayim. There is also the Shahar program, allowing chareidim to learn a profession as part of the Israeli Air Force. And there are many others which are beginning to give people the options they need.
Hatzlacha raba to Rabbi Klebanow and the army's efforts at recruitment to the Nachal Chareidi program! May many more people join so that our people can avoid the inevitable conflict and toxic language that will inevitably result when the army attempts to draft people by force if the chareidi recruiting goals are not met! And may the program continue to benefit of the guys and may they grow in midos and ruchnius there, as this will ultimately strengthen them in Torah as well!
Update 5/14/14: The below video in English, featuring information on Nachal Chareidi and an interview with R. Kelbanow was just put online today. Enjoy!
Click here to get Dixie Yid in your e-mail Inbox or here to "follow" me on Twitter.
Posted by DixieYid (يهودي جنوبي) at 1:07 PM