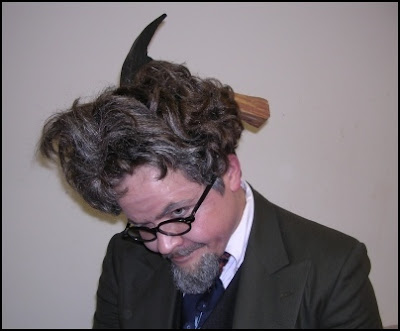 In Parshas Mishpatim, regarding the law of the unintential murderer, who is punished with exile in the Ir Hamiklat, the Mei Hashiloach, Rav Mordechai Yosef of Izbitz gives us a new perspective on Rashi's pshat there. In Shmos 21:13, on the pasuk, "וְהָאֱלֹקֵים אִנָּה לְיָדוֹ," "and Hashem caused it to happen to him," Rashi explains why Hashem set it up for this person to accidently kill someone else. He says that the one who killed accidently had killed accidently anohter time, but was never caught and therefore never got the opportunity to atone by enduring the punishment of exile. So Hashem makes it so that he will kill accidently now and go into exile. The one who was killed had previously committed intential murder, but there was not enough proof to execute him, so Hashem causes him to be killed accidently this time, so that he gets his just deserts.

But the Mei Hashiloach asks the famous question; "If Hashem made the the accidental murderer kill this time because he'd already killed accidently another time without being caught, then how did Hashem let it happen that time?!" He answers by connecting our story here to a pasuk in Tehillim 145:14, "סוֹמֵךְ ה' לְכָל-הַנֹּפְלִים וְזוֹקֵף, לְכָל-הַכְּפוּפִים," "Hashem supports the fallen and straightens the bent." He says that "the fallen," refers to those who have the mida, the trait, of anger, and who have acted on that trait and committed murder. Hashem supports that kind of person by giving them the kapara, the atonement, he needs, though being killed by the negligent murderer.

And he says that the accidental murder is being referred to as one of those who are "כְּפוּפִים," "bent." He says that the accidental murderer, who Rashi says killed b'shogeg, accidently, before, did not literally kill anyone. Rather, it refers to those who have the mida of anger, ka'as, but do not act out on it. However, they are bent under the weight of this bad mida that they are not willing or able to get rid of. Like a monkey on his back, his bad mida causes him to be bent under it, though he doesn't actually act out on it. Hashem, however, does not want to leave anyone in a bad matzav forever. So he decides to jolt the person out of his apathy and causes him to kill another person accidently. This jarring experience is the catalyst for the person to finally do teshuva.

We know that the Torah's teachings apply equally in all generations, and even this Rashi and pasuk about the law of accidental murderers has something to teach us. Today, a person may also have a bad trait or "low-level aveira" that he does on an on-going basis. But this does not appear serious enough in his eyes to bring his guilt level to more more than a slow throb. So he continues living with it month after month and year after year. However, at some point, he may hits a point where he goes further and deeper into that aveira than he ever thought possible. The depths to which he has sunk finally brings home, to him, how those "low-level" aveiros or bad midos he did nothing to break, had a lot bigger effect that he acknowledged. This is the chance for the person to finally do something about that long-time problem and do teshuva.

May we merit to realize our faults before they get out of hand and do teshuva early, so Hashem does not need to bring home its necessity using extreme measures!