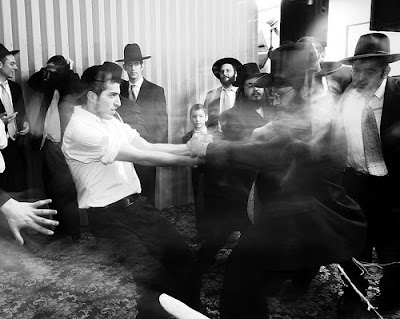 Of the kosher animals listed in this week’s parsha, zemer is one of them. The Radak and Rav Saadia Gaon that the zemer is a giraffe. I find it very fascinating that the word for giraffe describes Jewish song - zemer. The interpretation is suggested as follows.

Song and music can go two ways. It can elevate the spirit and even the body if the source is from “Hakol kol Yaakov.” Yet, on the other hand, it can lower the neshama and body if the source is from the nachash and tumah. It can either bring out divineness within man or bestiality. It can stir one to yearn for closeness of Hashem and the heavens, or it can gravitate one’s soul and body to gratify the cravings of physical appetites and fleeting earthliness.

Rav Shimon Susholtz from Beis Medrash Keren Orah shared with me the observation that especially when bochurim dance, one can tell whether the accompanying song is rooted in nachash or kedusha. The litmus test is to look at the position of their heads. If the heads face downwards towards the floor and feet, it is non-kedushah material. If their heads are straight, then it is holiness, for it arouses the soul and not the body. When I first heard this, I couldn’t believe that this was the barometer of the music’s source. Well, guess what? I found it to be true every time. [First observe the phenomenon before you start writing any commentary to the opposite.]

While we are on the topic, here’s another revealing observation. All the disco tech stuff awakens within an individual the desire to dance by oneself with oneself . It suddenly becomes show off time even if you don’t find yourself in the center being mesameach the chosson. With this type of music, the circle in which one was once holding hands with other Yidden peters out. Not so with the more traditional beats and chassidishe music. Why?

Kedusha, by definition, brings to unity and wholesomeness, while tumah, by its very nature, accommodates separateness and fragmentation. For if the soul is dancing, then all Yidden naturally tend to connect, since in the world of soul we are all one. If the body alone is dancing, then we tend to dance alone, for each individual has his own individual body.

We now might be able to answer why the giraffe is the symbol of the Jewish kosher zemer. The giraffe is unique by the fact that its head is so raised above the rest of its body. The head of the giraffe towers towards the heavens to symbolize that the Jewish niggun must raise one’s head towards Hashem, bringing man to a consciousness to distant himself from the pursuit of material lusts that lie close to earth.

The word zemer itself - identical to the letters of remez - hints to this concept. For zemer also spells ram zayin. Ram translates “to be lofty and high.” The letter zayin symbolizes nature, for nature was created in seven days. The zemer must raise one above the seven to yearn to be otherworldly even though these feelings might only last for a few moments. However, impressions do last forever!

Chazal say concerning Adam Harishon that before the sin, he was able to see from one end of the world to the other. His head and daas were clear and incredible. After the nachash seduced them to eat from the Eitz Hadaas, he lost that madraiga of daas. Hashem placed His hand on man’s head and dwarfed his dimensions. The nachash brought sadness into the world, as evidently seen from the curses given to Adam and Chava. The purpose of the zemer is to bring happiness, the opposite of which was brought by its neighboring letters nachash. But specifically, it refers to the happiness that brings about clarity of mission and not the cloudiness of mind; the light of meaning, not the darkness of chaos; and the direction of purpose, not the choreographic fluff that lead to dead ends.

Picture courtesy of Avraham Bank. Click here to get Dixie Yid in your e-mail Inbox or here to subscribe in Google Reader.
Posted by DixieYid (يهودي جنوبي) at 3:12 PM

I'm trying to understand this piece, which could easily be true, but raises questions. There is an assumption that bochurim dance to both holy and unholy music, and that the holy music causes them to move or position themselves differently.
So...who exactly gave the OK to play unholy music for the bochurim to begin with? Do we know it's unholy from its content or only from the response? If from the response, how do we know the response is caused by the music's unholiness and no other factor?

Well they do play "YO-YA" at frum weddings. I even heard it (w/o words) at a Chasidish chasunah one time!

There was actually an article on how unholy music entered the Yeshivish world featured in Dei'ah VeDibur with a followup here.
Whether or not you entirely agree with the hashkafa presented, which is decidedly Litvish, it is a very good read, if a bit long. I would recommend it as a starting point, for understanding the words of the OP.

Ultimately music, sound for that matter is spiritual by nature. Many a dictator has tried to control his people by controlling their music, realizing that music has the ability to influence the masses far greater than any other medium on account of it touch the spiritual nature of a person.

I guess that we're fortunate that all of the folk tunes, drinking songs, marches and waltzes that have been incorporated into Jewish music over the past hundreds (thousands?) of years were all rooted in Kedusha.

I was just going to post a thank you to Rav Brazil, but then I saw all these interesting comments.Reb Bob raises some good points. I'm notpersonally convinced of the "looking at feet is unholy" theory. Even if true, I think it could promote internal discord at a simchah and should not bethought about at that time.
One thing does need to be fixed, however. Jews lead to the right in kedushah since it represents rachamim. Many of the great fast step songs lead to the left. (Also check your shirt and jacket buttons and how you fold your arms!). Quite a few times I have reversed the group to the right and the agressive fastness disappears (maybe due to the unfamiliarity of the new direction or maybe because...)
In response to Gad Frenkel: There is the famous story of the Baal Shem in the forest rescuing a Beis HaMikdash niggun from a folk whistle of a peasant. Niggunim were also dispersed amongst the goyim. Yes, they may be rooted in kedushah.

Firstly, Dix, thanks for the acknowledgement, although the original Matzav post should also have been credited.

Secondly, if one looks at Matis' comment on the Matzav site, you will find that this criteria is far from an absolute one:
"Simanim are just that, simanim; they’re powerful elements, but not absolute indicators. There’s a huge cheshbon - like lehavdil when doctors say smoking causes cancer, yet we all know people who smoked and lived to 90. It’s an expression of power and intensity of the inyan, not an absolute mathematical formula."

As to Gad Frenkel, well, I have addressed this many times on my site, Ayein Sham...

Oh, & I meant to ask: is that R. Shmuel Brazil on the right in the picture? It looks like him, but because of the action shot, I'm not sure...

Yitz, thanks for the credit info. I changed it. And no, I don't think that's R. Brazil.

"There is the famous story of the Baal Shem in the forest rescuing a Beis HaMikdash niggun from a folk whistle of a peasant. Niggunim were also dispersed amongst the goyim. Yes, they may be rooted in kedushah."

True, however it's likely that the peasant was Jewish.

Maybe music appreciation needs to be taught in every day school and cheder. It's easy to grow up hearing very little inspirational Jewish music to use as a yardstick to measure quasi-Jewish popcrud against.

Neil - I don't know where you got that from. In any case, there are many Chassidic stories -- of the Baal Shem, R. Isaac Kaliver, the
Chabad Rebbes, the Divrei Yisrael of Modzitz -- about hearing songs davka from goyim & bringing them into Kedusha. However, not everyone can do that; certainly being a Chassidic Rebbe helps!