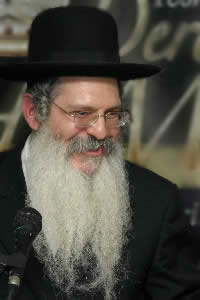 The Melaveh Malka this past Motzoi Shabbos with Rav Baruch Gartner, Rav Moshe Weinberger, and Rav Spiegel of "The Shtieble" in Cedarhurst was really really nice. The Melaveh Malka was to benefit the Derech Hamelech Kollel. Rav Spiegel and Rav Gartner spoke and my friend Dr. David Shiller was able to record was able to record Rav Gartner's shiur. He was kind enough to share it with me so for your listening pleasure, please enjoy the shiur.

CLICK HERE to get the shiur by either left clicking to listen to streaming audio or right clicking and selecting "Save Target As" to download. Please take note that the file is in w4a format (Quicktime/iTunes).

He told two really great ma'asim. One was the famous ma'aseh with the holy brothers Reb Elimelech of Lizensk and Reb Zusha of Anapoli. It was from the time they got put in jail because they were suspected of stealing something simply because they were visitors in town. The story illustrates a fundamental yesod of how to incorporate simcha and Emunah into your life no matter what Hashem throws at you.

I had never heard the second ma'aseh before. It was the story of a young Misnagdishe Avreich who was learning and being supported by his father in law. It happened one time that the Avreich was traveling and ended up davening the Shul in Chernobyl. He sensed something special there and was convinced to stay for Shabbos by the Rebbe Reb Nachum of Chernobyl. He was extremely impressed and decided to continue coming back. Over time, he became a real chosid of Reb Nachum both in the internal and external aspects of Chassidus.

His father in law was getting increasingly upset that his son wasn't learning as much as he had been before. He felt that he was traveling to Chernobyl too often and that his davening was longer, which shortened his sedorim afterwards. He asked his son in law for an explanation and the Avreich knew that he would never be able to get his father in law to understand by trying to explain it to him. He therefore convinced him to come spend a Shabbos with him in Chernobyl.

The Shabbos came and the Avreich kept looking at his father in law hoping to see some sign that he was happy with the davening or what he was seeing. He hoped that he would be inspired and that he would start to see what he had found there. Unfortunately, this was not the case. The father in law was getting more and more upset, seeing what his son in law had gotten himself into. After Shabbos, he was so angry that he decided that he would tell the rabbi exactly what he thought of what he was building there in Chernobyl.

He knocked on Reb Nochum's door after Shabbos. The Rebbe came out glowing after a beautiful Chernobyl Shabbos. The man began to give Reb Nachum an earful of everything that was on his mind.

The rebbe responded, "Let me tell you a story." He said that in the times of the Beis Hamikdash, there was a Yid in the Galil who was 60 years old. He had a long white beard, but he had never been to the Beis Hamikdash in his entire life. But at 60, he accidently broke Shabbos and now had to bring a Korban Chatas. He bought a keves and set out for Yerushalayim. But since he had had never been there, he had to ask directions several times along the way. People could not believe that someone his age, with a white beard, did not know the way to Yerushalayim and they even made fun of him. But eventually, he made it and came to the Beis Hamikdash.

When he got there, he couldn't believe what he saw. There was blood and guts everywhere. There were fires and people and animals all over the place. He couldn't believe that such a "balagan" could exist in the holiest place on earth! He complained to the Kohanim and asked to speak to their superior. The Kohen Gadol (who didn't even have a proper white beard; rather he had only a long black beard) came over wearing the eight holy garments. He told the Kohen Gadol what he thought of what was happpening and how it was not befitting at all for a Beis Hamikdash.

The Kohen asked him whether he had been to the Beis Hamikdash before. He answered that he had not, but that only now had he committed an aveira b'shogeg and had to come to bring a Chatas. The Kohen Gadol responded that he was honored to meet such a man who had never sinned in his entire life! The man ressponded in the affirmative that indeed he had never sinned except for that one time. At that moment, the lights started to go off in the Urim V'tumim. The Kohen pushed aside his beard so he could see and read the letters. He asked the man whether it was true that the previous year that he had sworn falsely in a business deal. The man stumbled and explained that he had really just stretched the truth a bit, but that besides that other time, he was clean.

The Urim V'tumim started lighting up again and then the Kohen Gadol proceeded to ask the man about one aveira after another. Finally, humbled, the man admitted that perhaps if he had come to the Beis Hamikdash more often, he might not have committed so many sins.

As the father in law heard this story, his mouth dropped open. It turned out that in a very very kind way, the Rebbe Reb Nachum Chernobyler was recounting all of the man's sins through the story. Over time, the father in law also became a chasid of Chernobyl "and they all lived happily ever after." :-)
But the Melaveh Malka was beautiful. We got to sing almost all of the Melaveh Malka zmiros and we had a nice little rikud as well. Again, it's definitely worthwhile to listen to Rav Gartner's short speech!

Picture courtesy of Derech Hamelech. Click here to get Dixie Yid in your e-mail Inbox or here to subscribe in Google Reader.
Posted by DixieYid (يهودي جنوبي) at 10:38 AM

Any links to Rav Weinberger's shiur?

Typical Hassidic tale. There is a entire genre of them. The skeptical misnaged sees the light and everyone lives happily ever after.

What's your problem with a little ruchnius? I promise you it won't hurt your learning.

"Typical Hassidic tale. There is a entire genre of them. The skeptical misnaged sees the light and everyone lives happily ever after."

Skepticism or no skepticism it took an awful lot of people who previously were not chassidim to adopt chassidus for it to become as prominent as it did...