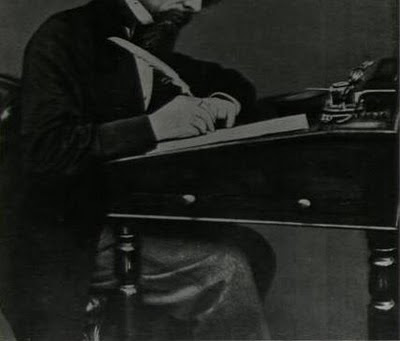 Always when he (the Tzadik, Reb Areye Leib Levin) was asked for an opinion or a comment on something or someone controversial, where the topic involved friction or rancor, his answer was silence. Not a word would he utter. If he was pressed - "Nu, Reb Areye, what do you say?" - he would shrug his shoulders: "I have nothing to say."

Once a son of his asked him, "Father, what do you mean by these silences, when you refuse to speak?"

"I will tell you," the good rabbi replied. "You have studied the... Rif... What did that great scholar do? He merely copied out whole passages from the Talmud; but he omitted the parts are not to be followed in actual religious practice. That is the meaning of his silences..."

They say that ancient painters,
of Japanese silk screens,
considered empty spaces
as meaningful as lines

Character's shaped
as much (or more)
by what's missing from our makeup,
by what we don't say, hear,
think, do, believe...

The better part of valor is discression.

The following story is one of my favorite sipurei ma'asios from my rebbe. (CLICK HERE to listen to the shiur this story comes from for yourself.) I searched for it and I can't believe I hadn't already transcribed this amazing ma'aseh yet. If you know the ma'aseh and can correct any of the details, please let me know. (Note 3/19/10: Big yasher koach to David Solomon in the comments for correcting the names.) I'm writing this from memory after not having heard the story for close to 10 years...:

Reb Mendele Vorker, the son of the Chernobyler Magid, and Rav Avrem'l, the Trisker Magid, were the best of friends. Even after they became the rebbeim of different towns they still kept in touch because they had made a pact as children to write to each other every week. So every week, there was one special Jew, a chosid of Rav Mendel Vorker, whose job it was to deliver letters between the Trisker and Reb Mendele every Friday. He would start out at his rebbe's home Friday morning to pick up his letter for the Trisker Magid. Then he would walk for several hours through the forest to the Trisker. There, he would deliver the letter to Reb Avrem'l in Trisk who would go into his room, read the letter and then write a reply letter. The man would wait for him to finish and then bring the letter back to his rebbe, Rav Mendel Vorker.

This man felt privileged to do his job and carried it out faithfully every week for many years. During that whole time, he never dared to open one of the letters and violate the intimate bond between the two Tzadikim.

However, one Friday morning, after the man had left Vorkov with his rebbe's letter, his was struck with a bizzare yetzer hara. He felt compelled to open the letter and read what the Tzadik wrote to his lifelong friend...

He carefully opened the letter, so that he would be able to close it again without the Trisker being able to tell that it had been opened. When he did, he was shocked to see what was on the paper... Nothing! It was a completely blank piece of paper... At first he felt confused, and then he felt hurt and angry. Was this some sort of trick that his rebbe had been playing on him all of these years? Has he been sacrificing for his rebbe to walk dozens of miles every Friday in hot summers and cold winters all as part of some practical joke at his expense?

With a heavy heart, he closed the letter and continued his delivery to Trisk, wondering what would happen next. When he got there, he delivered the "letter" to the Magid as he always did and the Rebbe took the letter and went into his room. A little while later, the Trisker emerged from his room with a flushed face. He handed the man a letter and he headed out of town back to Vorkov to deliver the Trisker's letter to his rebbe and spend Shabbos in Vorkov.

He had barely left the border of Trisk when he quickly opened the Reb Avrem'l's letter to see what was inside. And sure enough, this letter was also blank! He was bewildered, hurt, and upset. He was now convinced that the two Tzadikim were playing some sort of terrible joke on him. With a broken heart, he walked back to Vorka and straight to his rebbe's house. He couldn't even bare to look his rebbe in the face as he delivered the Trisker's "letter."

He returned home and resolved that the Vorker would no longer be his rebbe. He was just too hurt. Delivering these letters was "his" mitzva. It had been what he took pride in and what he felt privileged to do for two great Tzadikim. If it was all for nothing, the pain was just too great. He didn't go to the Reb Mendele Vorker's Tish that night, and he didn't go to the rebbe's Shalosh Sheudos either. But by the time Shabbos was over, he just couldn't bear the pain any more and he knew that he could not go on living without his rebbe any more. He had to speak to him about what had happened.

He came to the rebbe's house Motzoi Shabbos and waited for the rebbe to see him. When he finally came in, he stood silently for a minute and then burst out crying. The rebbe saw that he was clearly very upset about something and asked the man to tell him what was bothering him. He told the rebbe that he was ashamed to admit what he had done, but that he had to confess. He had opened the rebbe's letter on the way to Trisk the previous morning. "And what," the rebbe asked him, "did you see?"

The man answered that of course, he had found a blank letter. "And what did you do then?" the Vorker asked him.

"I delievered the 'letter' to the Trisker Magid and waited for his return letter. "And what happened when the Trisker gave his letter to you?" his rebbe asked.

"I opened that letter too as soon as I left Trisk."

He told the rebbe what he already knew. That the Trisker's letter was blank also. "And what did you think when you saw the two blank letters?"

"I didn't know what to think! I felt like I was delivering the rebbe's letter for nothing. Like it was all a waste."

"Let me explain something." the Vorker said. "Every one of the black letters written in a sefer Torah is an expression of Hashem's love for the Jewish people. But these letters only express Hashem's love which can be put into words. But the blank spaces between the letters... this is how Hashem expresses his love for us which is so great and which bursts forth to such an extent that it cannot possibly be expressed in words."

"Most of the time, I am able to express the feeling of love I have for my friend, the holy Trisker, with words. At those times, I am able to express that love with the words I write to him in the letters. But there are other times. Sometimes, the love I feel for the preciuos Reb Avrem'l is so great, so powerful, that it cannot be expressed in words. At those times, the only way I can tell him how much I love him is with blank spaces..."
My rebbe usually concluded this story with a follow-up personal epilogue. He said that he kept in touch with many of his former students from teaching at Ezra Academy, and that he exchanged letters with them very often when they went to Israel for the year. Unfortunately, he had so many letters that he could not keep them all though. However, he received one letter from a former student. When he opened it, he found that it was blank. At first he was perplexed, but then he remembered that he had told this story to that boy at school, and then realized why he had written him a blank letter. He said that this letter was so precious to him, and it was one of the only letters that he kept...
Click here to hear Rav Weinberger tell the story.
Picture courtesy of Life. Click here to get Dixie Yid in your e-mail Inbox or here to subscribe in Google Reader.
Posted by DixieYid (يهودي جنوبي) at 6:00 AM

Great stuff - just hope nobody at my shul sees it before I can use it...

R. Dixie,
Thanks for the great writeup. This is one of my favorite stories.

A correction on the names in the story though: (From the notes I took on R.Weinbergers Positive Parenting series: tape #10 - yes, I listened to it before the cd age.) It was the Trisker magid, Reb Avramil, son of the Tchernobler Magid. He was childhood friend of R. Mendele of Vorkov, from the Amshinav Dynasty. They made a childhood pact to send letters to each other every week.

David, I have to admit that when I listened to those tapes several times in the summer of either 2000 or 2001, it was also on cassette tapes! Thank you so much for checking your notes and correcting it. The part about the Vorker's name being Mendele I didn't remember at all, but the Trisker's name I definitely remember now as being correct. I had even tried repeating the names to myself periodically throughout the years to help myself remember, but I guess too much time passed and I didn't repeat the story to myself often enough.

Those are great great tapes. Again, thank you for the corrections!

Actually, based on the date of the shiur, I must have heard it the summer of 2001.