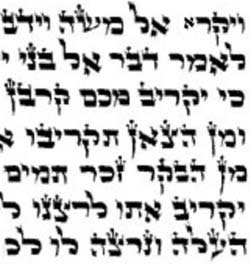 “And Hashem called to Moshe and spoke to him from the tent of meeting, saying...”[1]

The Arizal revealed that he achieved all that he did by virtue of the joy he felt in fulfilling mitzvos.[2] He was as supremely happy with every single mitzvah that he fulfilled as a person would be if he had profited by a million golden dinars. In the merit of this joy, all of the worlds opened before him and he was privileged to ascend and travel through all of them, from level to level. In this way, his soul was completely incorporated within the soul of Moshe Rabbeinu.

Similarly, the holy Baal Shem Tov—about whom Rav Mendel of Vitebesk testified that he was absolutely unique, and there had never been nor ever would be another like him—rose to all of the limitless levels that he did by virtue of being completely at one with every single Jewish soul.

These traits—joy in mitzvos and unity with other Jews—are both expressed by the small alef of the initial word of Vayikra. The small alef symbolizes being small in one’s own estimation in comparison with every other Jew, no matter who he might be. One cannot just remember that there is a mitzvah of ahavas Yisrael when someone is ill or tragedy strikes, G-d forbid. Even though it is true that, at such times, the bond between Jews is sparked into life, nevertheless this is not true love of one’s fellow Jew. The Baal Shem Tov achieved all that he did because he honored every single Jew with total self-nullification, and it was this that brought him to complete incorporation within the soul of Moshe Rabbeinu to whom the little alef of Hashem’s call referred directly. He sought to embody the little alef absolutely. As the Zohar teaches, “He who is small is great [רב]”—by making oneself small before everyone, one becomes incorporated within the truly great, the true Rav.

For us this means that we must also strive to think little of ourselves in comparison with others and not to cause any kind of pain or suffering to any Jew. Quite the contrary; we must be willing to sacrifice ourselves for their sake, and this is the uppermost yechidah aspect of one’s soul—to suffuse the soul of every single Jew you meet with joy and vitality, no matter who he is. Although, on the surface, this might appear to be a level that everyone can easily reach, it is not so simple. The alef means to teach[3]—humility demands great study and is not a simple avodah at all. To really intensify one’s love of his fellow Jews every single day and unite with all of their souls is a very deep kind of learning, and it was this that opened all of the gateways of heaven before the Baal Shem Tov just as simchah shel mitzvah had for the Arizal. One must actively contemplate and delve into the good that is in every single Jew.

The Baal HaTanya teaches that all of the Torah’s secrets are a manifestation of Chochmah, and the light of dveikus and experiencing delight in Hashem’s presence is a manifestation of Kesser. We have a general principle in Kabbalah that when one reaches a higher level, one automatically attains all of the levels below it. For this reason, when a person really takes pleasure in Hashem’s presence in a holy way of dveikus, he naturally also experiences the light of Chochmah. In just this way did the Baal Shem Tov attain all of the levels—by binding himself to the light of Kesser which is a “lover of all of Yisrael.” This bound him to each and every Jew, and once he was attached to the root of everything, he also merited the light of all of the other sefiros.

Rav Avraham b’Rav Nachman taught that this is why Moshiach is called “Prince of Peace.” Ultimately, Hashem will open all of the heavenly gates before Moshiach by virtue of his being a tzaddik who constantly seeks to foster peace among all Jews. The Baal Shem Tov shared a soul-root with Moshe because his main focus was also the avodah of the “small alef,” and in its merit he was privileged to hear Hashem “call to Moshe.”

CLICK HERE to get Toras Chochom on Vayikra in English

Picture courtesy of chabad.org. Click here to get Dixie Yid in your e-mail Inbox or here to subscribe in Google Reader.
Posted by DixieYid (يهودي جنوبي) at 11:09 AM