My first trip to the Lubavitcher Rebbe's Ohel Since About 1997 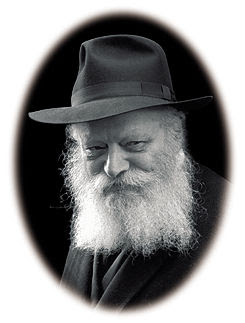 My in-laws brought over some supplies yesterday for a barbecue for all of us, plus my father-in-law's da'ati sister from Netanya and her husband. Having just come in from Israel, one of the first things they wanted to do was to go to the Lubavitcher Rebbe's z"l's kever. So I agreed to go drive my wife, her family from Israel, her aunt, and my 7 year old daughter and 5 year old son over there.

Backtrack: I have been very reticent to go to the Lubavitcher Rebbe's kever (hereinafter "the Ohel") for a long time, even though it is only about 15 minutes from where I live. In fact, the last time I was there was when I attended a "Pegisha" in Crown Heights in about the fall of 1997. They took everyone to the Ohel that Sunday morning.

While I enjoy and benefit tremendously from learning Tanya with a chevrusa and other Ma'amarim of the Baal Hatanya with Rav Moshe Weinberger over the years, I have never particularly connected with the teachings or personality of the most recent Lubavitcher Rebbe in particular.

Even last week, on the Rebbe's 16th Yohrtzeit, despite the fact that a few people in my Shul and in the blogosphere (thanks Menashe!) encouraged me to go, I simply did not feel the need to go. But circumstances being what they are, Hashem made it that my wife asked me to take her and the family to the Ohel, so I agreed.

A couple of funny things happened despite my efforts to conduct myself at this Tzadik's kever the same as I would at any other Tzadik's kever. I saw that people were writing kvitelach to the Rebbe (or Hashem, I'm not sure) with all of their bakashos/problems, reading them at the Ohel and then tearing them up and throwing them in. In my experience, we write k'vitelach when we go into see a living Tzadik, but not when going to a kever, so I didn't do this although my wife was busy writing up her k'vitel. 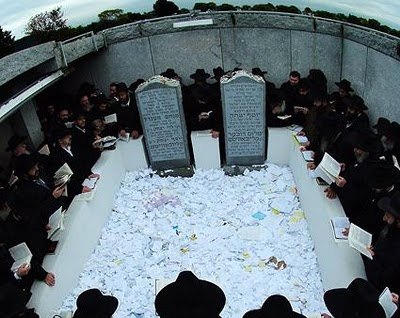 I took my Tehilim and went in with my 5 year old son to the Ohel. I said one kepitel Tehillim with him and then he watched everyone else while I continued saying some Tehillim. He asked me why people were ripping up their papers so I told him what they were doing with their k'vitelach. He told me he wanted to do it to. Sigh. The best laid plans of mice and men...

I walked him back into the (amazingly large) building by the Ohel so we could prepare his k'vitel. I asked him what he wanted to daven for so he told me three things. Now bear in mind, he has never really heard of the Lubavitcher Rebbe, he's only 5, and doesn't know of any of the "inyanim" relating to the Rebbe or Lubavitch today. So it was quite interesting to hear the three things he wanted to daven for. One interesting aspect was that he didn't want to ask for anything for himself. Here they are:

That boy is something! So we went back into the Ohel and before we went in, I reminded him that when we go to the kever of a Tzadik, we're davening to Hashem, in the zechus of the Tzadik, but that we never daven to the Tzadik himself. He said his tefilos for those three things, happily ripped up his kevitel, and threw the pieces into the Ohel.

Afterwards, we were waiting for everyone else to finish so I showed him a picture of the Lubavitcher Rebbe on a brochure so he would know what the Tzadik looked like before he was niftar.

Thinking of his recent tefilos, a short while later, we saw a man sitting in the library over there who had a long white beard just like the Rebbe's. My son pointed excitedly over at the man and said, "Look, he came back already!!!"

There is a Russian saying: “Through the mouth of a child speaks the truth”.

wondering if the issur of visiting the same grave twice in one day applies here as well?

Your sons tfillos are so sweet.
I think you will find these interesting.

Your son has the clearest vision of all of us.

Since I live in an area that is pretty much void of Yiddishkeit, I'm mispallel at the local Chabad house - I'm wondering whether it's time for me to visit the Ohel as well.