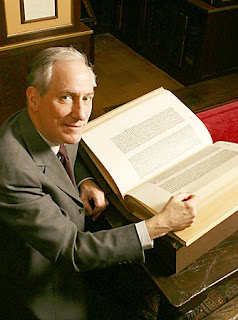 A tremendous talmid chacham, the Rebbetzin's Husband (who shall, for reasons best known to himself, be hereinafter referred to as "the Torch."), wrote a post with a very interesting theory about the the recent meteoric rise of the "anti-intellectual" and "anti-academic" likes of Chabad, Breslov, and Rav Amnon Yitzchak. Among other explanations, he theorized that we may be attracted to such movements and rabbis today because we feel that we cannot compete with the academics and intellectuals on their playing field. We therefore look to the mystical and spiritual so that we will not feel we have to compete with the academics on their "turf."
The highly intellectual Alter Rebbe explained in the fourth perek of Tanya that the only way to attach oneself to Hashem, which is the purpose of life, is through actually and halachically fulfilling the mitzvos and learning Torah. No amount of emotion, dancing, shukeling, singing, guitar-playing, love, or prayer can create an attachment between a finite human being and the infinite G-d by itself. The only thing that can bridge the gap is something which is also infinite. The Torah (and the mitzvos which mean carrying out of the words of the Torah) and Hashem are one, according to the Zohar. By learning Torah and doing mitzvos, one is therefore connecting himself to the Infinite G-d.
While one is rewarded for fulfilling the mitzvos and studying Torah without emotion, dancing, prayer, excitement, or love, this is not the ultimate goal. In order to truly connect to Hashem, one must learn the Torah and do its mitzvos with love and awe of G-d.
If the people in the video here, and all of the Chabadniks and Breslovers out there keep halacha and learn Torah, then their avodah is much higher than the cold, intellectual buildings in the sky constructed by orthodox academics.
The Torch, in the comments, commented that the quotes from A Simple Jew's post on How to Be a Breslover Chassid proved that Breslov is anti-academic because "[s]tudy of the teachings is geared toward learning practical lessons," presumably as opposed to the preferable study of Rebbe Nachman for the sake of intellectually understanding his philosophy.
I happen to know that the Torch personally is not a cold intellectual at all (in the perjorative sense - He is a genius, a masmid, a tremendous talmid chacham, and a warm and caring Jew). Lulei d'mistefina, I would say that I am perplexed that he would write as if passionate halachic Judaism were not preferable to academic-style Judaism.

Picture courtesy of Andrew Smith's Blog. Click here to get Dixie Yid in your e-mail Inbox or here to subscribe in Google Reader.
Posted by DixieYid (يهودي جنوبي) at 5:44 PM

I read Torch's post also (he and I also know each other). I didn't really read into it like you did.

I actually was just listening to R Weinberger's Bilvavi Shiur #3 yesterday. He said outside the text of Bivlavi that there are different paths towards Kedusha. There isn't just "one way".

If they are following Shuchan Aruch then that's good enough for me.

To me, saying that one's "avodah is much higher than the cold, intellectual buildings..." is a tough pill for me to swallow. If you want to say that their schar of simcha shel mitzvah is greater, I agree 100%.

I posted the following on Torch's blog:
My wife has very strong Chabad roots and we are close with several Chabadniks. That being said, I have told friends that I can see why a BT might be attracted to Chabad. You buy the kapateh, gartel, hat, get sets of Sichos, buy a painting or photo for your walls and...there you fit in.
Of course, externally. The real work, that most BTs don't see is what's internal.

These Jews (and this one too) are looking for something. It's up to all of us to give them something authentic.
If a Jew can be turned on by one lecture by R A Yitzchak, then that either says very little about our religion or it proves that each person has that moment when their spark is lit. I hope it's the latter.

First, I obviously agree with you and the Torch that a Judaism built "derech binyan" is the key, and that any path that's used as a "get spiritual quick" scheme is shallow and not what it's all about.

Second, I also agree that there are many derachim to Torah, which the Torch also acknowledged in his post, though implicitly bemoaning the popularity of "anti-academic" streams of Judaism.

But if all things are equal in terms of halacha, the passionate Breslover is in a much better place than the cold orthodox academic. The former has a guf and a neshama while the latter only has a guf. Certainly he'll get schar for his mitzvos, but Hashem created us as a guf with a neshama for a reason. We're supposed to infuse the kochos hanefesh of our guf into the mitzvos done with our neshama.

Also, it's certainly true that the kalter halachic Jew is in a much better place than the passionate Jew who's not keeping halacha.

It is interesting that Breslov is supposed to be "anti intellectual" and yet, the very first lesson in Likutey Moharan is to find the wisdom in everything, and the Kitzur LM, talks about how through Torah study prayers are accepted, etc.in fact all the works of Breslov I have studied, Torah study has been one of the major emphases.

1. I am not smart enough to be an intellectual, but I appreciate the praise nonetheless.

2. I certainly did not intend to imply criticism of the anti-Academic approach. It was intended as an observation, not a judgment.

3. I wouldn't say that anti-Academics feel they are unable to compete - I think they are extremely uncomfortable with it, though.

4. To my mind, a hybrid approach would get the advantage of both olamos, that of the moach and that of the lev.

1) I don't remember calling you an intellectual (using the word as a noun, it sounds perjorative - as an adjective, though, that probably *would* fit). I did refer to you as a talmid chacham though, which I feel comfortable standing by.

2) You said you didn't mean to imply criticism of the anti-academic approach. Are you sure? If so, I appologize for reading that into your explanation of its popularity.

We can be too prone to stereotype other groups of Jews based on scanty evidence or hearsay, or simply mistaking the part for the whole.

2) Yes, I'm sure. See, as well, the disclaimer I put in, in red type, in the original post: This is not to question the legitimacy and meaning of these approaches; they are Torah, too. I'm only discussing why they enjoy such popularity now.

DY- I know better than to argue with a lawyer.

Got it. Glad to clarify. And I second Neil.

It's not an "ouch". It is that discussions of "who is a better Jew" seem out of character for the persona of your blog (I can think of several other blogs that thrive on such topics). For me, especially after the murder of the Fogel family, I want to stay as Achdus-centered as possible.
When I read "cold intellectual" I think of the general machloches b/t Chassidim and their Litvishe brethern. ;)

Wow-we could have been having this discussion out somewhere in suffolk county fifteen years ago.

Izbitza-
You mean instead of playing Bandu and Jenga?

Do not dis Jenga.

Neil, you might want to look into what you're criticising more thoroughly before you make such a judgment. Chabad actively emphasises the importance of inner change--see here. If some BT's don't "get" that, then that's a fault in them that is despite what they're being actively taught in Chabad, not because of it.

As for the issue itself--Yidden are attracted to Kabbalah and Chassidus because their holy neshomos sense that they need it in order to survive this dark golus (see here and here). Instead of explaining every phenomenon in a purely secular sense and in effect ignore the presence of the Neshomoh, a Jew should explain these phenomena in terms of the Neshomo and its needs (I am not discounting the possibility that such explanations may have some truth, albeit on a very superficial level).

But RYO, Neil didn't make any of the criticism to which you're objecting! (What is it about the online medium that makes people assume everything is an argument?)

What he said was that of 70 ways Hashem gave us to quench the soul's thirst, Chabad has gained popularity because people found the chitzoniyus to be useful or enticing. He didn't say anything to remotely imply that that's all Chabad is! Just that it's enough to make an attractive first impression on the prospective BT. In fact, Neil closes that paragraph with the exact opposite claim, your very point: "The real work, that most BTs don't see is what's internal."

I wasn't critcising CHABAD. I was using it as an example since the discussion was about Chassidus. That first ma'amar of the Rebbe is amazing and I'm glad you linked it.

My comments (as pointed out by Micha) were about chitzoniyus. Having the livush doesn't make you a chossid anymore than owning every KTAV book published that refers to the Rav (Rabbi Joseph B Soloveitchik, penty of material about him on chabad.org) make you a "YU guy", nor does owning a large white knitted kipah and a Breslov pamphlet make one a Breslover.

I am not c"v saying the CHABAD is all about externals. It is just that the external is only one aspect. As mentioned before, it is the internal work that most people don't see.

Okay, Neil, I see what you meant now--sorry about the misunderstanding.