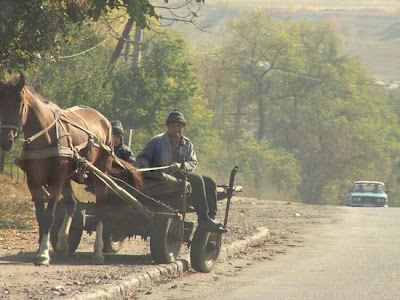 Received from my holy Chevrusa on the path to Uman:

For those of you just joining us We just left the town of Volednick. When we arrived is was alos hashachar. We managed to keep Leon up at the steering wheel by chanting the niggun of Uman uman rosh hashanah Uman Uman rosh hashana. Truth be known the loudest voice of all was that of our faithful driver. Who keeps reminding us that it is not him to thank but hashem for everything.

We said slechos and davened. The shames turned up the heat for us in the Tyson. The temperature was probably 40 degrees outside. Within 10 minutes the room was warm and filled with powerful slechos teffilos and tehillim of the heliga chevrah we are traveling with. One of the chevrah told us of a segulah to leave a coin on the matzevah while you daven and when you are done to take the coin with you and carry it with you so that the holy Tzaddik of valednic Reb Yisroel Dov Ber is always with you. Our faithful driver Leon got an opportunity to catch up on some much needed sleep. We charged up our cell phones mp3 players and batteries. We filled our stomachs with tea and oatmeal but most important. We charged up our neshomas with tifillos and supplications to hashem for ourselves and our loved ones.
Everyone in the room yearned for a kesher to the tzaddik to carry their tefillos to hashem.

The best way I can describe the village of Valednik is that it looked like life 100 years ago. People traveled by horse and buggy taxi, on foot or on bicycles. Thw streets were packed clay and gravel. Most of the shopping for necessities was conducted by trading potatoes or onions for clothing rice or other necessities. The holmes are built of log and mortar construction and sheet metal roofs. It is hard to believe that a place like this still exsists. There are small fires along the road so people can warm up and cook their food there are white geese, ducks, cows, and horses roaming the streets as well. There are even more primative homes built of twigs and straw. People walking in the streets carrying heavy loads on the backs. We are now out of the village completely and on our way to Anapoli to visit the Rebbi Reb Zusha of Anapoli. One of his chassidim once made the mistake of exclaiming at the table that he loved pepper Reb Zusha answered "You love pepper and I love the Reboneh She'll Olam" he was known to faint from fear of yiras hashem. It is another grey day in the Ukrain but our hearts and thoughts are filled with colorful visions of the upcomming holy day of Rosh hashana. Our driver is on the phone with a yid that needs his services to UMAN exclaiming oy vey baruch hashem I can't take you bit give the phone to a driver and with hashems help I will arrage a ride for you To be continued..............

Part 2 here UPDATE: See the first comment for several previous updates from the kever of the Baal Hatanya & other updates that preceeded this one.

Click here to get Dixie Yid in your e-mail Inbox.
Posted by DixieYid (يهودي جنوبي) at 7:00 AM

Here are some of the earlier updates preceding the one in the main post from my friend on his way to Uman:

We are on our way now to visit the caver of the holy tzaddik yesod olam" The Baal hatanya". I have been zocheh to learn the maymorim of the baal hatanya for the last 6 years. What a zechus it has been and now to have the opportunity to go to the caver of this tzaddik and say thank you and to ask that he help another one of his talmidims tiffilos be answered litov. It is a 180 mile trip each way. I say this because we have to come back to the same place we started to go to our next site. We hope to make it in time to daven Mincha and go to the mikvah. We have been stopped once already by the local police. They are all crooked you have to bribe them this one was pretty cheap. I think we got away with 50 dollars. *** please email me your fathers mothers name if you can. I want to add it to my list of names. I will update you soon.

We just finished davening karbonos before mincha. We are getting close but we are also very close to shkiya and want to try and daven by the caver of the baal hatanya. We have been driving through the countryside of the Ukraine. It has been cloudy the whole day and has been sprinkling here and there. There are rolling hills and farms with ducks crossing the road. Beautiful cows farmers selling potatoes and onions everywhere. Till my next update...........

If you are just joining in please be sure to read the emails that are bellow this current one to catch up.

I have every Hebrew name of everyone in this email and will continue to daven for everyone at every mokem kodosh I go to.

Well b'h we made it to the tzion of the baal hatanya. We have been driving at night and there are no lights on th road I am amazed at how the driver was able to find this place. There are no signs it is not a marked cemetery. We drove down a single lane country road and made a right turn between two trees and then down a long wooded gravel road. We came to a stop by the top of a hill where the driver told us we should walk he was afraid to go any further. The road was to wet and he thought he would get stuck. It seems that they are building a huge Bais medresh here lots of construction going on in the middle of nowhere. We walked down over 1000 stairs till we came to the tzion. I was the first one to the door when I realized the door was locked. My heart was broken. I thought we would not get in. The driver called out to us that the caretaker was on his way down. B'h he opened the door and let us in where I said mana loshen davened maariv prayed for every name I had written down on my papers we sang two niggunim of the alter Rebbi we did not dance because we were told that the whole site that we were standing on was a cemetery. The Germans yimach shemom had destroyed this holy site 60 years ago. When we finished we had the zechus to use the Mikveh which was absolutely clean. I've been told this is the nicest it would get. Its all down hill from here. Rather all up hill from the tzion up those same 1000 stairs. I've been told that the baal hatanyas torahs are all about being mevatel oneself and that is why you walk down to the tzaddick to shed all your loftiness and be mevatel yourself to come to the tzaddik. Back to the bus we ate dinner and we are now on our next 6 hour journey to visit the tzaddik in volednick. Reb yossel of volednick. Who promised that anyone who comes to visit him even if he can't get into the cemetery but just holds on to the door handle and is mispallel. The tzaddik assured all that he would personally carry you teffilos through. I hope to be a good messenger on behalf of the entire meshpacha. To be continued ..............

We are about one hour from Volednick now. I think I slept about 2 hours on and off. We stopped several times along the way for coffee water fruit and gas. These markets look like a shuk. Every vendor seems to sell the same thing. The fruit smells and taste better than anything we have in NY. The seltzer has more gas then any seltzer I've had. We have been lucky tonight the police have not stopped us yet we made it through Kiev which is a very modern city with beautiful hi rise buildings and 3 McDonalds within 10 block radius. Our driver Leon just broke out in tune Uman Uman Rosh Hashanah and the van started hopping. We can all feel the energy in the air as we near the next kaver of the Tzaddick Reb Yisroel from Volednick. Just a little word on Leon when he picked us up he said Baruch hashem the Chassidim have arrived. He then told us we are on our way to see the holiest Tzaddikim so prepare to daven and say tehillim. Every time we thank him by saying "yasher coach" he reminds us not to thank him only thank hashem he is just the messenger. Wow once again the goyim are reminding us "Hakol bedei Shomayim" We will I'H be able to daven at Neitz at the Tzion. To be continued............