My Meeting with Rav Schwartz by Rabbi Yaakov Feldman 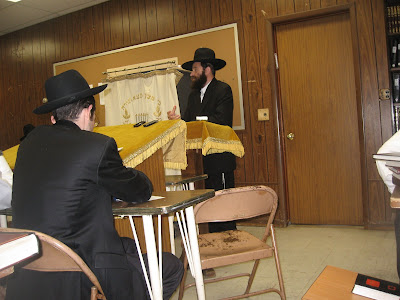 My Meeting with Rav Schwartz
Rabbi Yaakov Feldman (Author of Mapping Out Bilvavi)
You can hear the Shiurim from Rav Shwartz's U.S. 2008 trip HERE
We’ll call it “The Bilvavi Effect”. It’s what happens when you learn a Kabbalah work of Rav Schwartz (the author of the Bilvavi series): you suddenly find yourself going deeper and deeper inward, and moving in slow wonder through a level of your being you’d never been in before. I discovered where it comes from when I met with Rav Schwartz during his recent trip to America. But I’m getting ahead of myself; let’s see what it took to learn that.
“I’ll be meeting with a Rav from Jerusalem Thursday night” I’d said at the dinner table. My two marriage-age daughters turned around wide-eyed. They were hoping for a bracha (a blessing) for a good husband from a sage and they were sure that that’s where I was heading. But, no; one doesn’t meet with Rav Schwartz for such a bracha, though he’d certainly offer one. He also isn’t the sort of Rav one meets with to ask for a bracha for success, for children, for health or the like, though he’d certainly sense your need and say a tefillah (a prayer) on your behalf.
No, one goes to Rav Schwartz to learn how to draw closer to The Ribbono Shel Olam (G-d Almighty). And I was granted a chance to do that.
But you don’t just ask straight-out, “How do I get closer to The Ribbono Shel Olam, Rav Schwartz?” You also don’t ask it in English, since the Rav only speaks Hebrew. So, you have to phrase a conversation in your mind which may very well prove to be one of the most important dialogues in your life. And you have to find the right Hebrew words for it that would express what your soul needs to ask … and that would avoid your coming across like some poor dolt who can’t find his or her way around a dictionary, which is certainly a challenge. For even if you’re fortunate enough to be able to read Hebrew fluently, that doesn’t mean you’re able to speak it with any level of sophistication.
So, I dwelt on my question for a week. I worked on the wording, the bottom-line and details, and I also tried to explain to the Rav why I so admired his many, many works. I realized that there’d be things I’d need to say about how I’d gotten to the point that I am now, both in my studies and in my work on myself. I quickly became frustrated and decided to “call-in sick” and scrap my plans for a meeting.
But one doesn’t do that when it comes to an individual like Rav Schwartz, who lives thousands of miles away and is one of our age’s greatest spiritual teacher. So I struggled to gather my thoughts.
Then it occurred to me: I’d need to speak about IT -- my greatest spiritual challenge, the one bugaboo that has been holding me back for decades now. “Ribbono Shel Olam!” I called out, “would Rav Schwartz be able to rectify this, my thickest, ugliest, most chaotic and turgid challenge to closeness to You?”
I met with the Rav in the basement of a shul three-quarters of an hour before he was due to address us all. The room was large and all but empty, except for a long table, a couple of bottles of seltzer and cups, and the Rav.
I sat down before him and bared my soul in my poor Hebrew, and he listened intently. We needn’t go into the details; suffice it to say that my having realized that I would have to talk about IT and would have to express it clearly and fairly quickly, and the fact that I was able to reveal it to one such as he, was of infinite help.
Oh -- as to “The Bilvavi Effect”, it’s rooted in this. I caught sight of the Rav moments before he was to speak. He’d just been among a couple of people and pulled himself away to gather his thoughts. But rather than just dwell on what points he wanted to make, I noticed that he closed his ears and eyes, kind of scrunched-up his entire being to a ball, and concentrated deeply on what needed to be said. It was a sight to behold. It was as if he was somehow or another disappearing, for all intents and purposes, and entering into a very quiet place in his being. He then stretched himself out, and walked up to the spot he was to address us from and began.
And it occurred to me that that’s what I had done to some degree when I needed to get my thoughts together to address the Rav, and what I find myself doing when I delve deeply into the Rav’s Kabbalah seforim. “The Bilvavi Effect” comes down to entering the core of one’s being, step by step, losing all contact with your surroundings, and communing with your inner being.
May G-d Almighty grant us all the ability to set aside the time to do that regularly, and to draw close to Him in the process. And may Rav Schwartz continue to guide us in that for many, many good years to come!

(Picture taken at Yeshiva of Carteret Wednesday, Sept. 10th, 2008 courtesy of Me)

I also met with the Bilvavi Rav. It was a wonderful experience.

I don't know. This is a nicely written essay but perhaps a bit too dramatic. I saw the Rav as a human being, a great human being, but a HUMAN being. That inspired me even more I believe.

We can all be like Rav Schwartz and work on our kesher with Hashem constantly. No, we're not as wise as he is, but we can be like him.

Human beings make mistakes, but even with our missteps, we can pick up the pieces and move forward and closer to Hashem.

I agree. I think we are creating a cult of personality here. They say that the Baal Shem Tov came to this earth to show the potential a human being can achieve.

I disagree with your statement about creating a cult of personality and I also think that this is not what anon 7:43 meant either. Though I definitely appreciate and agree with what you said about the Baal Shem Tov and what anon 7:43 said about learning what we can actually achieve from Rav Shwartz.

I think that R Feldmen hit the nail on the head. What I've gotten most out of R Schwartz's teachings is that we need to connect with the inner greatness within each of us to achieve that D'veykus with Hashem.

i agree with neil, and i believe i was posting about the same idea here as Rav Feldman, but without as clear an understanding. (also I haven't really learned the Bilvavi sefarim, but am connecting to the same Torah from somewhere else)