Hashem's Sense of Humor For Late-Comers to Shul 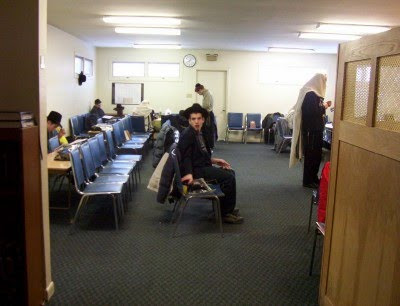 This past Friday night, I got to Shul just after everyone had begun davening shmoneh esrei. As is known, it is asur to walk in front of someone who is davening shmoneh esrei ("אסור לעבור כנגד המתפללין "Orach Chaim 102:4, based on Brachos 27a, as illustrated by this famous story of Rav Moshe Feinstein). Unfortunately, someone had chosen to start their shmoneh esrei in the back of the aisle leading in from the entrance to the shul, so that the 4 amos in front of this person covered the entire entranceway to the Shul, such that I could not come more than three feet into the Shul.
Whenever this happens, I have the challenge of being "dan l'chaf zechus" that the person is merely affected by the widespread neglect of this din, and but that he is not generally insensitive to others (although in this instance he is inadvertently blocking some from entering the shul or causing others to transgress the isur of walking in front of someone davening shmoneh esrei).
I therefore had to daven mincha as far forward in the aisle as possible so as not to personally block anyone else from entering the Shul. Things began to get humorous though when, after I had finished davening, I wanted to go to my seat on the other side of the Shul. As soon as the first person had finished davening shmoneh esrei in the back of the aisle, another "even-later-comer" had begun davening right next to the first person and so I still could not pass by.
I realized that Hashem was humorously telling me that I had no one to blame but myself for my predicament when, just before the second davener finished his silent amida, another "really-late-comer" had begun blocking the aisle with his shemoneh esrei right beside the second late-comer!
In the end, I think I was finally able to head toward my regular seat in the middle of Kabbalas Shabbos. Not realizing that I hadn't reached Hashem's punchline yet. I was so late getting to "my" regular seat that others had filled the entire row!
Moral of the story: Don't pick on other people's faults. Only late-comers like myself suffer from the unintentionally inconsiderate acts of other late-comers!

Picture courtesy of saratogachabad.com. Click here to get Dixie Yid in your e-mail Inbox or here to subscribe in Google Reader.
Posted by DixieYid (يهودي جنوبي) at 10:37 AM

(And, of course, it’s the same for everyone.)

I'm not sure it's assur to walk in front of someone who violated the issur against davening in the entranceway. (The foyer is permitted, I'm talking about the doorway and hall.)

Oddly, I think this is in Choshein Mishpat, but I can't recall where it comes up.

IOW, I think Shua was correct in your discussion of last year. (I Googled to try to fill in the gap in my memory, and found that discussion.)

The reasoning being that someone who davens in a doorway is the maziq (see the CM terminology?), and therefore your kavanah comes first. Second, he already demonstrated a willingness to compromise his own tefillah, and therefore you needn't show more haqpadah than he does.

I'd be curious what the source for what you're saying is. The two sevoras I heard for this din would seem to me to still apply though. Even though the person may have been over on lifnei iver or mesaya l'dvar aveira by causing others to pass in front of him while he's davening, I'm not sure that would obviate the two reasons. One is that it will distract him. Even though he may not be makpid in causing others to be over on אסור לעבור כנגד המתפללין, he may still be trying to concentrate in his tefillah, so passing in front of him would still cause the undesired distraction. The other reason is because the shechina is in front of a person who is davening and it's presumably disrespectful to "walk through" or "walk over" the shechina. This svora would be equally applicable as well, even if someone davened where they shouldn't.

But I know you well enough to know you have a good source for what you're saying. So I'd be curious to see if this is a real/accepted psak to follow. I can certainly ask my rebbe as well, which I haven't done yet.

There are various kinds of latecomers, including:

1. Usually comes on time, but was detained this time and arrived late

2. Always comes at the same constant time, regardless of the official start time

Standing in doorways or other bottleneck areas is another issue. Some people seem to plant themselves in these places specifically when other people will need to get in or out.

Thank you *very* much for that source. Is Do you or does anyone else know if this psak is "mekubal"? And if so, in which communities?

Good point about the different types. I'd say that although I have at various times been a member of all three types (as well as being counted among those who come on time as well), the 2nd and 3rd types do reflect a bad mida (which is why I'm trying to work on that).

What do you think the difference in underlying cause may be between the 2nd and 3rd types that you defined?

These are some possible examples:

Type 2 may have a fixed work schedule that keeps him from coming earlier (such as to Mincha during the winter). Or he may want to sleep really late (as on Shabbos mornings).

Type 3 may have a poor sense of timing that gets him late to appointments and events in general. Some people leave their house when the event is scheduled to start, assuming that either (1) they travel at the speed of light, or (2) that it will start late anyway. For weddings, (2) is a really good assumption.

Lateness can also be a form of rebellion or a way to make a grand entrance.