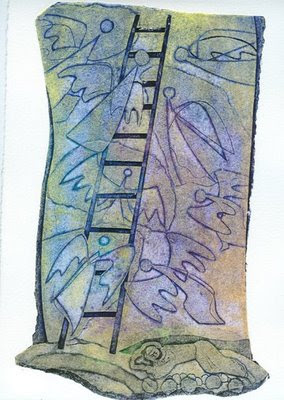 “And Yaakov went out from Be’er Sheva and went toward Charan. And he touched upon the place, and he tarried overnight, for the sun set suddenly. And he took from stones of that place and placed them beneath his head, and he lay down to sleep in that place.”[1]

Rashi explains that Yaakov placed the stones beneath his head to form a protective barrier since he was afraid of wild animals. The stones began to bicker among themselves, since each stone wanted the exclusive honor of supporting the head of the tzaddik. Hashem immediately joined them together as one stone, as we see from the verse that follows: "וַיִּקַּח אֶת-הָאֶבֶן אֲשֶׁר-שָׂם מְרַאֲשֹׁתָיו"—“And he took the stone that he had placed beneath his head...”[2]

The second statement of Rashi seems very difficult. How can we say that Yaakov, the vehicle for the Tiferes of Atzilus,[3] [which is the spiritual source of Torah[4]] stopped learning and went to sleep? Surely, just as he never forgot Torah for an instant for the fourteen years he was in yeshiva, he would never knowingly disrupt his thoughts from their involvement in Torah? The answer to this question is that even Yaakov’s sleep was an aspect of Torah. The Tikkunei Zohar teaches that this is the deeper meaning of the words of the verse, "וַיִּשְׁכַּב בַּמָּקוֹם הַהוּא"—“And he lay down in the place.”[5] The word ישכב—“lay down”—spells יש כ"ב—“there are twenty-two.” This refers to the twenty-two letters of the Alef Beis that form the Torah through which Hashem created the world. [In the Sefer Yetzirah, these are called “twenty-two stones”—the essential building blocks of creation.] Yaakov went to sleep in the place of these twenty-two letters.

This is similar to the statement of Rav Michel Zlotchover regarding his slumber. “I have never been in the state of oblivion that most people call sleep. Whenever I go to sleep I have an aliyas neshamah, my soul ascends to the upper realms on high.”

The deeper works explain that the verse, "אָכֵן יֵשׁ ה' בַּמָּקוֹם הַזֶּה וְאָנֹכִי לֹא יָדָעְתִּי"—“Surely Hashem is in this place, and I knew it not”— indicates that until that time Yaakov had not understood just how much a person can grasp of Hashem while he sleeps.[6]

CLICK HERE for Toras Chochom on Vayeitzei
shirat devorah. Click here to get Dixie Yid in your e-mail Inbox or here to subscribe in Google Reader.
Posted by DixieYid (يهودي جنوبي) at 5:00 AM