"Flipping Out" in Israel - The Book - And the Real Issue 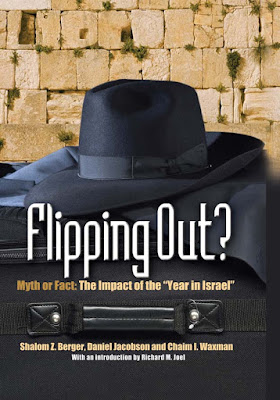 Gil Student, at Hirhurim, is publicizing a new book, called Flipping Out, in which an educator, a psychologist, and a sociologist discuss the "growing alarm" many parents experience when their children "frum out" during their year in Israel. They see it as a threat to their [modern orthodox] lifestyle and aspirations. The book, according to the post, asks tough questions, like whether the year in Israel "inspire[s] spiritual growth... or a dangerous religious radicalization?"

I have heard this type of question before and the main concern is that the "right wing" yeshivas and seminaries are siphoning off the modern orthodox youth and co-opting them into a more "chareidi" lifestyle. The mere fact of this question being asked indicates backward priorities and an upside down view of life. The question implies that we must look to the phenomenon of spending a year in Israel, at the yeshivas and seminaries in Israel themselves or some other external factor outside of the "modern orthodox" communities and parents themselves for the answer to this "problem."

The real issue is addressing that which is moving the young people who are "flipping out," as my rebbe taught in light of Oros Hateshuva 14:37. Rav Kook, in that chapter, says that it is the nature of the Baal Teshuva (not just modern colloquial Baalei Teshuva, but more specifically the classical Baal Teshuva, who is a frum person who does aveiros and then returns) is to always want to move and grow at all times, towards higher and higher levels of kedusha and attachment to the Creator. The Baal Teshuva is not content to just remain placidly in one place in Yiddishkeit. Rather, he constantly wants to grow.

My rebbe also pointed out that there was a Rav, a few years ago, who asked a similar question. "Why are the Chareidim taking away all of our Baalei Teshuva?" Basically, he's wondering why so many Baalei Teshuva seem to become frum in nice, wonderful "modern orthodox" communities, and then seem to drift over to some form of "chareidi" community after a while. The answer to this question and the one raised by the "Flipping Out" book folks is essentially the same.

The children in our communities who want to grow, who are filled with idealism and hope, are searching for something more than the often (no one's saying always) pure materialism of many modern orthodox communities on one hand, and the dry intellectualism of other segments of that community on the other. Instead looking outward to find out why the "colloquial Baalei Teshuva" on one hand, and the frum Baalei Teshuva who "flip out" on the other hand, are leaving modern orthodoxy to one extent or other, people who ask this question should look within.

Why are idealistic and searching young people not finding excitement, ruchnius, shteiging (growning), and spiritual attachment in their parents' lifestyles? Much of the time, it is because even though those people are wonderfully nice people, who are frum, their children want something more. Just as they are not satisfied to make the same, small amount of money throughout their entire lives, they are not satisfied to let their Yiddishkeit stand at one level their entire lives either.

(It very well could be that once they take that step into a "chareidi" where commitment to Yiddishkeit is a bigger priority in life, the institutionalized problems in that community will cause the growing person to be motivated to move again into another community in order to take their path of growth to the next level. The point is that whether it involves "changing" communties or affiliations at all or not, the growth-oriented person is never satisfied to stay where he is forever.)

Rather than ask what the yeshivas, seminaries, or conspiratorial "chareidim" are doing to attract our children, we need to be asking what is causing our children to look outside of what they are brought up with to channel their desire to grow. The answer lies in a revamping of families' and communities' priorities when it comes to their goals in life.

IY"H, all of us, whether "modern orthodox" or "chareidi," should develop ourselves into people whose main enjoyment and priority in life is growth and avodah in our Yiddishkeit!

or after leaving the modern institution, and then leaving the charedi instituion, the baalei teshuva eschew both camps and just decide to be themselves. Like someone whom I know.

thanks again for writing more from friday's shiur!

Thank you so much!

This is actually not from this past Friday's, but from the Friday before that. Glad you read Dixie Yid on days other than Friday!

I don't get it. Why would modern parents be upset with their kids becoming "frummer?" My sister married a goy. My 2 brothers married goyim. I became "frum." Don't parents get it yet? What is important is which direction you are headed in.

Great post. R Mayer Schiller in his, IMHO, must read THE ROAD BACK published in the late 70's dealt with this same issue of why one would chose to go to the "right". We all seem to end up looking for what is most authentic to our genetic messorah.

When we go to Israel for a year, we see a lifestyle we've never seen before - one that would not be feasible in the United States, and whose existence is denied there. That lifestyle is the most beautiful thing we've seen, and we naturally desire to live it.
But the year ends and we return to the USA. When we mention our dream, people don't understand, or they mock it, or they laugh about waiting for us to "land" after six months.
And after six months immersed in the American lifestyle, we land. What we've seen in Israel seems so distant, so foreign, so impossible... we begin to doubt it and ourselves. We do what our parents want us to do and what is good according to an American lifestyle. We forget...
But the dream isn't dead. It's holding on tenaciously in the back of our minds, and when we smile sadly at enthusiastic new returns from Israel, or when we feel envy for friends who have managed to stay there after seminary/yeshiva, that's the dream. When we say, "I wish I could visit Israel more often," that's the dream. And when we say, wistfully, "I want to move to Israel, if I can..." that's the dream speaking.
It's faded, but there. And maybe one day I'll be able to revive it and go back...

Thank you very much!

I agree that the main thing is which direction people are headed in. I may be biased by the constant love and support my parents give for all of my life choices, even if it is "frummer" than the choices they made, but I can have some sympathy for parents. It is very hard for many people. Any move to the "right" implies that what was good enough for their parents is not good enough for them, and that's painful. If you view more Yiddishkeit in life as equally or more valuable than money, then you will appreciate your children having even more "frumkeit." But if you aren't zoche to see it that way, then you may just be insulted. For people coming from that background, it's hard. I'm not saying it's right, but it's hard.

I definitely hear what you're saying. Looking for what is authentic is why I didn't find what I was looking for in the "modern orthodox" community early on in my teshuva process, but that's another story.

Halevai, we should all hold on to that idealism, which reflects that which I posted about here: http://dixieyid.blogspot.com/2007/11/why-you-cant-give-up-on-your-big-hopes.html