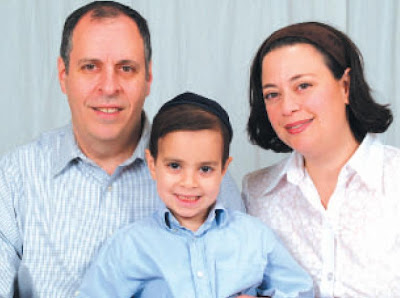 This beautiful and bright child has been battling a rare form of pediatric cancer known as Neuroblastoma since he was 3. Following nine months of intensive treatment at Memorial Sloan-Kettering Hospital (MSKH), Zev was in remission. Fourteen months later, he relapsed. Zev has had to undergo major surgery, chemotherapy and radiation; nearly a year later, Zev's scans look good.

Unfortunately, Neuroblastoma has an extremely high rate of relapse.

Zev needs another drug to stay in complete remission. His little body is fighting the drug 3F8 with which he's currently being treated. Currently, a new is being developed. The improved drug could help cure Zev and 300 other children with this disease. But the new drug needs to be manufactured, at a cost of almost five million dollars.

Researchers have developed techniques that can be used to make antibodies like 3F8 more human-like which will be more effective and better tolerated by patients. A portion of the work will be carried out at the Memorial Sloan Kettering Hospital Cancer Center, and part contracted to a small pharmaceutical company

Large pharmaceutical companies do not see the profit in healing only a few hundred children annually. We are appealing to you to leverage your influence, relationships and support to drive the humanization of 3F8 to benefit the several hundred children, like Zev, who fall victim to Neuroblastoma every year. When this antibody is better tolerated and more effective, and when it can be manufactured on a scale that is economical, the lives of more children will be saved from this deadly cancer.

Helen and Ranan Wolff, Zev’s parents are grateful to be a part of this community. Time and time again you have shown your generosity to the Wolff family. The meals, babysitting, blood donations, words of support.

Now I am asking for your generosity again.

Please, open your hearts to Zev Wolff. Zev has come so far, he's been so brave and so strong.

You must see this slideshow, telling his story.

For more information, please contact Asher Mansdorf at amansdorf@aol.com. Tax-deductible checks can be made out to:

(Picture courtesy of The Jewish Star)

Click here to get Dixie Yid in your e-mail Inbox.
Posted by DixieYid (يهودي جنوبي) at 3:39 PM

Email ThisBlogThis!Share to TwitterShare to FacebookShare to Pinterest
Labels: Tzedaka