Are These Proper Criteria From Choosing Justices? 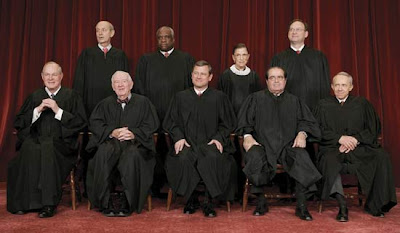 Though this sounds, at the beginning, like a political post, it's not. I was upset recently by what I read about what the Democratic front-runner for the Nomination, Barack Obama, has said about what criteria he would use in appointing supreme court justices, were he to become president.

Here's one comment, among several, that he made about his criteria: "We need somebody who's got the heart, the empathy, to recognize what it's like to be a young teenage mom. The empathy to understand what it's like to be poor, or African-American, or gay, or disabled, or old. And that's the criteria by which I'm going to be selecting my judges."

This seems to imply that a supreme court justice (who is charged with deciding the law on a given matter, and not issues of fact), should not judge based only on the law, but should have a broader role, that of affecting social change for the victims and the helpless of the world. Now that sounds very beautiful, but this former constitutional law professor is forgetting that there is a separation of powers in this country! Judges, at least in the supreme court, are judging issues of law. They are merely there to decide the meaning of statutes and the Constitution, not as agents of societal change.

The Torah speaks about this when it commands judges, in Vayikra 19:15, "--לֹא-תִשָּׂא פְנֵי-דָל, וְלֹא תֶהְדַּר פְּנֵי גָדוֹל: בְּצֶדֶק, תִּשְׁפֹּט עֲמִיתֶךָ," "Do not favor the the poor man, nor should you honor the rich man. With truth shall you judge your people." The Sifra on Vayikra 4:2, Parshas Kedoshim, clarifies, "שלא תאמר עני הוא זה, הואיל ואני והעשיר הזה חייבים לפרנסו - אזכנו ונמצא מתפרנס בנקיות; לכך נאמר: 'לא תשא פני דל." "Lest [the judge] say, 'Since this man is poor. And this rich man [the other litigant] is obligated to support the poor, I will cause him [the poor man] to win, and he will be supported honorably.' Therefore, the Torah says 'Do not favor the poor.'"

Being a judge is not easy. Sometimes the law simply does not come out on the side of the party who you or I would like to see win, because of their unfortunate situation. But the Torah says that the solution is not to pervert justice to get the desired outcome. Similarly, l'havdil, in secular law, we would be in a very bad place if judges and justices did as Barack Obama here seems to imply they should do, i.e. let their sympathies determine the outcomes of their judgments, rather than the law.

Hashem gave us the mitzva of tzedaka to give us merit by doing this mitzva. There is no need to obviate the need for this zechus/merit by perverting justice to support the poor and the oppressed through the judicial system. There are many things outside of the judicial sphere that we can and should do to help those that need it.

Click here to get Dixie Yid in your e-mail Inbox.
Posted by DixieYid (يهودي جنوبي) at 7:00 AM

To support the idea that a good judge needs the "EMPATHY to understand the condition of a poor person" is exactly correct. This implies the higher and more comprehensive level of Chockmah/wisdom beyond the sheer discernement level of understanding. this has nothing to do with favoring a person due to his or her condition. the lightning bolt/Barak even being in the running for the 44th president of this sacred country is another support of the fact that the exile of edom has ended. The Sar/prince of native America came as the man Sweet Medicine thousands of years ago and established the council of 44 peace chiefs/ the thunder beings. The geulah is before our eyes!!

It's quite a jump from devar Hashem, divine law, to a Noahide court. A human system, based on a 200-y-old document that already has chunks of it crossed out, is not the same as the 3,500-y-old Torah. Cases do not get to the Supreme Court unless there are good legal arguments on both side. The Court has often been sympathetic to economic and security concerns, so why not social ones? I don't think Obama is proposing a "Do you feel bad for poor black mothers?" litmus test.

Joseph, you're of course right that it's a jump. It's an argument by analogy, which I made clear by using the work "l'havdil." The two are not even in the same universe.

As to your point about Justices weighing social concerns as they decide close-call issues of law, I would say that even though all kinds of issues have entered into their considerations, that this has gone too far, and that their investigation *should* center on finding "original meaning," not interpolating their own meaning. Usually, policy arguments (as opposed to legal arguments) that lawyers make before the court usually

The amoral evil at the heart of the Obama phenomenon is breathtaking.

Democrats need Justices who will rubber-stamp all their bizarre attempts at social engineering, and not consider the actual law at all. This goes well beyond tempering justice with mercy, or other concepts we're familiar with. It's actually like jury nullification of the law, only done by judges.

I'm afraid you're right. And this is what "judicial activism" is all about.