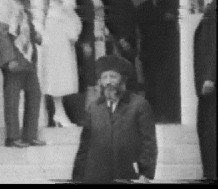 In Oros Hateshuva 15:8, Rav Kook continues on in his theme about how when one even just reaches the level of hakaras hacheit, recognizing his sins, then he is already "אוחז ברעיון התשובה," has a grip on the idea of repentance. And that even if you haven't yet brought your recognition of the truth into the world of action, that you are already in the world of Teshuva.

He goes on further to say that even if you committed aveiros, sins, which block you from doing teshuva, you are still in this category of one who is "אוחז ברעיון התשובה." My rebbe explained that even if you find yourself in the category of one of those people in the Rambam Hilchos Teshuva 4:1, who has done one of the "עשרים וארבעה דברים מעכבין את התשובה," things which block teshuva, there is still hope. And even if you are ChV"Sh in the category of one who has lost their share in the World to Come according to the Gemara in Sanhedrin 10a, "כל ישראל יש להם חלק לעולם הבא...ואלו שאין להם חלק לעולם הבא," there is still hope. Why?

My rebbe pointed out that there is no one of us that is worse than King Menashe. None of us have none as many of the things which "block teshuva" or take away our share in the world to come as much as that person. Yet the Gemara in Sanhedrin 103a says, "א"ר יוחנן משום רשב"י ... שעשה לו הקב"ה כעין מחתרת ברקיע כדי לקבלו בתשובה מפני מידת הדין." "Rav Yochanan says in the name of Rebbi Shimon Bar Yochai... that Hashem made something like a tunnel in heaven in order to accept [Menashe's] Teshuva [without the knowledge of] the attribute of justice." And Rashi there explains that, "מידת הדין היתה מעכבת שלא להקביל פני מנשה בתשובה, ועשה הקב"ה מחתרת ברקיע ופשט ידו וקבלו." "The attribute of justice was blocking [Menashe] so that his teshuva wouldn't be accepted. But Hashem dug a tunnel in heaven, stretched out His hand and accepted him."

Furthermore, the Gemara in Sanhedrin 105a also says that "דורשי רשומות אומרים כולם באים לעולם הבא." "The seekers of hints say that all of them [all those who have lost their share in the world to come] will enter the world to come." Truly, "לא ידח ממנו נידח," Hashem will not let anyone be left behind as the world progresses towards redemption, as the Ohr Hachaim brings down with regard in the ma'aseh of Pinchas (according to הרב ישראל אייכלר here - I still have to cite check that.)

Click here to get Dixie Yid in your e-mail Inbox.
Posted by DixieYid (يهودي جنوبي) at 6:25 AM