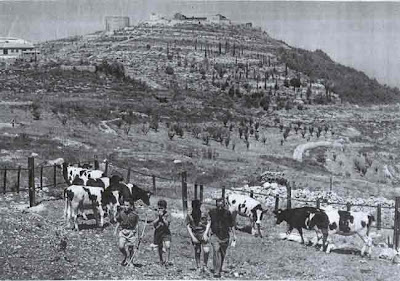 The following three stories are in the homecoming spirit of Yom Kippur, the sacred day which is devoted to “teshuvah” – spiritual return. The first story is from an earlier era, and the other stories are from our era:
1. In Jerusalem there is a famous “tzaddik” – righteous person – who is known as the Rachmastrivka Rebbe, and people come from all over to this Chassidic Rebbe for his blessings. His righteous and hospitable Rebbetzin (wife of a rabbi) has a special affinity for “baalei teshuvah” – returnees to the Torah path. No one knew why, until the Rebbitzen revealed the reason at a party in which the Rebbetzin, despite her advanced age, insisted on organizing for a newly married baalei teshuvah couple. At that celebration, the Rebbetzin told the guests the following story about her father:
Her father was the grandson of a spiritual giant, the great Chassidic Rebbe who was the illustrious author of the work, Bnei Yissaschar. When her father was young, however, he was influenced by the Zionist and leftist ideologies of that era, and he left the fold to join a group affiliated with “Hashomer Hatza’ir” – a leftist Zionist youth organization which was stridently secular. Hashomer Hatza’ir founded kibbutzim in the Land of Israel; thus, his group went up to the Land of Israel where he went to work building roads and began living on a kibbutz. The young man knew that his grandfather had been a great Jew, and even felt himself on at least one occasion being pulled to return to Judaism, but he ignored these feelings.
One day on the kibbutz, he saw another kibbutznik sitting before a pile of tefillin (phylacteries used in prayer), tearing them apart and throwing the scrolls within them into a garbage can. He couldn't contain himself. “Are you crazy? What are you doing?” he cried out. He told his fellow kibbutznik that these scrolls contain some of the “noblest ideas in human literature.” His fellow kibbutznik, however, just looked at him and kept on pulling the tefillin apart, as if to say, “So what?”
The grandson of the author of Bnei Yissaschar was so shocked that he got up and left the kibbutz. He traveled into Jerusalem and wandered the streets in his shorts and sandals, not knowing where he was going. Finally someone invited him into a synagogue and began studying Torah with him. So fascinated was he by the learning experience, that for the next two years he practically did not leave that synagogue and became not only a religious Jew but a learned one. He ended up marrying the daughter of a well known Rebbe and giving birth to a girl who became the Rachmastrivska Rebbetzin.
(Rebbitzen Leah Feldman, the wife of my rebbe, Rav Aharon Feldman, attended the party that the Rachmastrivska Rebbetzin gave for the newly married couple, and it was there that Rebbitzen Feldman heard the above story. Rav Feldman told over this story at the convention of Agudath Israel of America in 1999.)
2. Over a year ago, I met a group of students who had recently graduated secular Israeli high schools. They had come to my Chareidi neighborhood, Bayit Vegan, Jerusalem, in order to experience the holiness and harmony of a traditional Shabbos. I first noticed them at the Friday night service of the congregation where I was praying that night, and these visiting students joined with great enthusiasm in the singing of the joyous psalms and prayers welcoming the arrival of the Shabbos Queen. I noticed one student in this group who was singing and swaying like a chassid, and his light-filled face expressed great yearning as he sung with great fervor the ancient Hebrew words of these psalms and prayers.

As I watched him and the other students, there emerged tears of joy in my eyes and feelings of hope in my heart. Their presence in our Jerusalem neighborhood reminded me of the prophetic promises that our people are destined to be reunited through a return to our spiritual roots. We experienced a taste of this unity that Shabbos evening, especially when we all joined together in a circle-dance, as we sang the concluding stanzas of the “Lecho Dodi” hymn which refer to the end of our humiliation in exile, the renewal of Zion, and the rejoicing of God with our people.

After the services were over, the students received warm Shabbos blessings from the members of the congregation. The students then began to walk to the homes of their hosts for the Friday night meal. I and the student that I noticed earlier were walking in the same direction, and I asked him where he was from. He told me that he was from a HaShomer Hatza’ir kibbutz in the north and that he was very inspired by our services. He asked me about my background, so I mentioned that I am from the spiritually-searching generation of the 60’s. He told me that he was interested in this searching generation, and he began to tell me more about his own spiritual searching within Judaism; however, our conversation was interrupted when he needed to enter the home of his hosts.

When I arrived home that evening, I asked Hashem to continue to guide this student and all the other students on their homecoming journey. And I hoped that I would have the privilege of meeting them again.

3. The following story appeared in an article by Yonoson Rosenblum in the summer issue of the Jewish Observer, the magazine of Agudath Israel of America. The article cites examples of successful Torah outreach by the Chareidei communities in Israel, and one of the examples cited is an organization named, Ayelet Hashchar (Morning Star), which has been placing Torah-committed couples on more than 60 kibbutzim and smaller settlements around the country. Among the kibbutzim which have benefited from the warm and dedicated outreach of these couples is Kibbutz Geva, which last year experienced its first Yom Kippur service. A member of the kibbutz wrote a thank you letter to the director of Ayelet HaShachar expressing appreciation “for having created for us a Mikdash M’at (Miniature Sanctuary) in the midst of our everyday lives and secular existence, and for having made it possible for us to touch the holiness, the elevation, of this unique day – Yom Hakippurim.” The kibbutz member adds:

“The emotions during the prayers broke down all barriers, and enabled us to touch every link in the chain of our common tradition, reaching back to the roots of our common existence.”

The above two stories from our era are a reminder that a growing number of Jews in the Land of Israel have begun a journey of return to their spiritual roots. May this journey lead to the fulfillment of the following Divine promise which is found in the haftorah that we chant on Yom Kippur morning:

“Then your light will burst forth like the dawn and your healing will speedily sprout; then your righteous deed will precede you and the glory of Hashem will gather you in.” (Isaiah 58:8)

May the Forgiving One seal us in the Book of Life.
-Yosef Ben Shlomo Hakohen

I think Rav Aharon Feldman is the uncle of Rabbi Ilan Feldman of Beth Jacob in Atlanta, no?

How was this posted on Yom Kippur at 5AM?

But anyway, almost all of my posts are pre-scheduled to post in advance and go up at that time automatically.