Kol Nidrei - From the Piaczna - By Rav Zvi Leshem 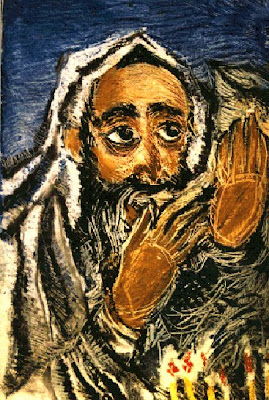 YOM KIPPUR: Before Kol Nidrei
Rav Zvi Leshem
The Rambam has a famous position that only those Jews who live in Eretz Yisrael are referred to as the tzibbur, the public community. This fact invests the Jews living in Israel with a serious responsibility for our brethren who are still in the Diaspora. The Maharil, in his Laws of Yom Kippur, quotes Mahari Segel, who asks why we have longer piyutim, liturgical prayers, regarding the goat that was offered in the Temple than we do about the scapegoat, whose power of atonement was far greater? One of the answers given is particularly interesting. The goat offered in the Temple atones for violations of the Temple’s purity and holiness. Since the Temple’s holiness is still in effect even when the building is destroyed, and entering the Temple Mount in a state of ritual impurity is a grievous sin, the Jews of the Diaspora ask Hashem to forgive the Jews of Israel who may have been remiss in this area. This reflects the principle that all Jews are responsible for each other. As a proof, the Maharil cites the confessional liturgy in which every Jew asks forgiveness, in the plural, for a long list of sins he may never have committed, since in fact, each of us is asking for forgiveness for every Jew. Let us take a deeper look at the mutual responsibility that every Jew has for each other.

In Chovat HaTalmidim, the Piaseczner Rebbe describes the states of yichud ilaah v’yichud tata, upper and lower unification. Lower unification takes place within Malchut, the collective body of Am Yisrael. After all of the Jews have united (lower unification), then they can collectively unite with the upper sefirot, i.e. with Hashem Himself, reaching the state of upper unification and rectifying all of reality.
The Rebbe uses this idea to explain the statement made before we perform many mitzvot, “for the sake of the unity of Kudsha Brich Hu (Hashem) and the Shechinah (represented by the collective Jewish People) … in the name of all of Israel”.

The Rebbe explains that this process actually has three stages. Firstly, each one of us must work to make ourselves into an integrated personality, in which the body, brain, and soul all work together to serve Hashem. We all know that when we are feeling personally “not put together” we are not in a state in which we can maintain proper relationships with other people. Secondly, each one of us must work to unite ourselves with all of Am Yisrael. Unfortunately this is easier said than done, but we must never cease in our efforts to bring authentic unity to the Jewish People. Only after these two aspects have been perfected are we, Am Yisrael, as represented by the Shechinah, able to unite with Hashem. Thus the prayer formula which discusses uniting Hashem and the Shechinah ends “in the name of all of Israel,” since the higher unity of God and the Shechinah is absolutely dependent upon the prior unification of all of Israel.

The Piaseczner Rebbe further writes in Zav v’Ziruz, that if we want to make spiritual progress, we should set ourselves an annual goal. Where do I want to be one year from now? What kind of person do I want to be by next Yom Kippur?
Then, throughout the year, I should measure myself by the standards of the “new person” and check periodically if I am succeeding in closing the gap between the old and the new. If at the end of the year, I am no closer than I was a year ago, then in a sense I have wasted a year of my life, God forbid. Every year we should make it our goal to work on unity, including the personal, national, and cosmic levels. If we all sincerely make this our top priority, we can, with Hashem’s help really change ourselves and the world.