The Back Story on Sender Uri's Teshuva in Early Israel 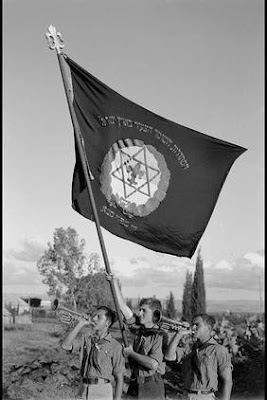 The following is some special background information on the Rachmastrivka Rebbitzin's stories about her father that Yosef Hakohen told over in THIS POST right before Yom Kippur, heard by Rabbi Reuven Boshnack from her brother, R' Yaakov Uri, during his visit a few years ago to Boca Raton, FL on behalf of Zaka.

I heard from R Yaakov Uri (Proprieter of Uri's pizza, and brother of
Rachmistrivker Rebbitzen from Yosef Hakohen's guest post) that their father Sender Uri, the grandson of the Bnei Yissasschar- was drafted into the army, and when he got out, he went, with alot of other conscripted Jews, to Israel. He He said that Shomer Hatzair didn' work out, apparently because of the story that Yosef told.

He then became a construction worker and was involved in building roads in Yerushalayim and was building a road from between a certain bakery in Meah Shearim and one of the hospitals. A mocher seforim (book seller) came by once, with a wheel barrow full of seforim (as was the minhag in those days). Sender turned to the mocher seforim, and asked for a Ynei Yisaschar. The mocher seforim stopped dead in his tracks. This was a modern guy, with a barren head and a chup (shock of hair in the front) asking for a Bnei Yissaschar?!

So the mocher seforim said- "What do you know about the Bnei Yisasschar?"

The Mocher said, "And you are standing here like this?!"

Sender said, "I was gechapped (drafted), what do I know?"

The Mocher said, "If I take you to learn, will you?"

Sender Uri agreed became a talmid chacham and well recieved in all of the
circles of yerushalaim of that time, both by Rav Kook and R Yosef Chaim
Zonenfeld.

If you look in the new (Bloom) edition of Bnei Yissasschar, they thank R
Sender. They borrowed some kisvei yad (original manuscripts) that R Sender had from the Bnei Yisaschar. "Borrowed" should be in quotations. The Toldos Avraham Yitzchak Rebbe asked him to loan the kisvei Yad- and R sender said, "The ksavim don't
leave me. A bachur can come to copy them."

He died, I think, at the age of 90. That day, he turned to his son and said
something like, "Today is a good day to die."

How his son ended up with the most popular pizza store in Geulah- that's
another story. Fortunately, he made his special pizza sauce for us, and helped cook the cholent when he came for Shabbos too!