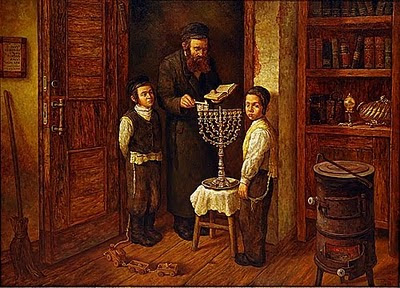 Reb Itchie Mayer Morgenstern's Torah on Parshas Mikeitz and Chaunkah, with English excerpt and full text in both English and Hebrew in pdf form, just in time for the last day of Chanukah!

Even when a person seeks dveikus [Yosef] with all of his might, he still requires the level of Dovid-Yehudah [desire] to complete his Divine service. Although Yosef was kodesh kodashim, all the while that he was separate from Yehudah’s aspect he could not leave his imprisonment. Even when a person seeks the spiritual pleasures of the level of Chochmah, he still must be filled with yearning to access true closeness to Hashem. Avshalom is an example of a person who accessed the level of Chochmah without yearning for further improvement and closeness to Hashem. He had a “bad eye,” or a negative attitude that tainted his imagination. This made him unworthy of ascension to the throne of Dovid-Yehudah.[1] Clearly, we too must take care to always work on strengthening our yearning for holiness. Without its force, we run the risk of remaining fools who wander around spiritually without ever really achieving anything lasting.

Every desire for holiness is a form of prayer before Hashem. This is how Rav Pinchas of Koretz explains the folk adage of his day: “If a person’s house burns down, he’ll become wealthy.” This is because when people see how miserable he is, their hearts go out to him. They then feel a strong desire that he recover from his personal catastrophe. These desires act as petitions before Hashem, and sometimes they are so abundant that they transform the sufferer into a wealthy man.

Rebbe Nachman teaches a similar concept, but he explains that the desire is much more powerful when one expresses it in words, since it actually assumes the character of prayer. After a Jew reaches the aspect of mikeitz-kamatz, he arrives at the next level: “And Pharaoh dreamed.” This means that he accessed the positive aspect of the imaginative faculty which is the avodah of Yosef who was called, “master of dreams.”[2] At this level, one is able to make yichudim, holy unifications, in his thoughts.

The main avodah of Chanukah is to draw down the light of Hashem into our every limb, in the manner of the yichud of ner. This yichud is composed of combining each of the Divine Names EHYH, ELHIM, and ADNI with the Sheim HaVaYaH. The first combination with אהי"ה represents CHaBaD; the second with אלהי"ם alludes to CHaGaT; and the third with אדנ"י to NH”Y. These six Names have a total numerical value of 250, the same as that of נ"ר, or candle. [יהו"ה = 26; 3 x 26 = 72; אהי"ה = 21; אלהי"ם = 86; אדנ"י = 65; the total including another 6 for the kollel of each of the six sheimos = 250] This is the yichud that we make by lighting the Chanukah candles.[1]

Practically, this means that through the lights of Chanukah we purify ourselves from our desire for food which corresponds to CHaBaD, for money which corresponds to CHaGaT, and from our base urges which correspond to NH”Y. [On a simple level, this is because one eats with his mouth which is in his head which is the seat of the mentalities of CHaBaD, one does business transactions with his hands which is in the realm of the torso of CHaGaT, and the baser urges are sourced in the lower realm from the waist down.] Our task when we light the menorah is to beg Hashem to bless us with true purity in these areas. We must take pleasure in Hashem and also feel a powerful yearning to increase in holiness, just as we light another candle each night of Chanukah.

Picture courtesy of Boris Dubrov. HT Crawling Axe. Click here to get Dixie Yid in your e-mail Inbox or here to subscribe in Google Reader.
Posted by DixieYid (يهودي جنوبي) at 5:00 AM

Thank for posting this. I read it erev Shabbos, but didn't comment then.