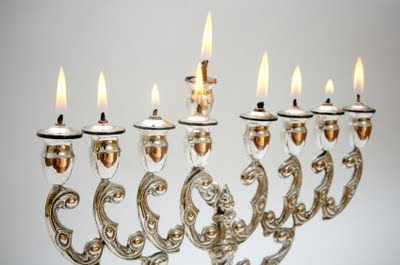 Reb Itchie Mayer Morgenstern's Torah on Parshas Vayeshev, with English excerpt and full text in both English and Hebrew in pdf form:

The main task of Chanukah is to rectify the aspects of Yaakov and Yosef. We can do this by contemplating the lights of Chanukah and recognizing that the entire expanse of creation is exclusively a reflection of the light of Hashem. We must also learn the thirty-six tractates of Shas, since each one opens the gates to a different spiritual illumination. [There are a total of thirty-six candles lit on Chanukah, exclusive of the eight shamashim.] We must also celebrate Chanukah with an abundance of joy and praise and thanksgiving to Hashem. But we must also rectify Netzach, since without Netzach we cannot completely rectify Hod. The avodah of Netzach on Chanukah is to learn an abundance of Torah, and give as much tzedakah as possible, in an aspect of Yissachar [Torah] and Gad [gomel dalim]. We must also strengthen our bitachon that the thirteen attributes of mercy are drawn down during Chanukah.

Our every action during these days must performed with joy and good heartedness, as we feel the pleasure of connection with Hashem in an aspect of Asher, [which also means fortunate, and whose portion flows with the olive oil of the menorah]. We must be very wary not to act out of depression or sadness, since this flips the letters of הוד to דוה, from splendor to suffering, as we find in the verse, "כָּל-הַיּוֹם דָּוָה"—“All the day is pain.”[2] Instead we must strengthen ourselves in the avodah of teshuvah and bitachon. We must draw down the light of the Chashmonaim, whose every victory was due to their inexhaustible bitachon in Hashem. It was their trust in Hashem that empowered them to act with courage and self-sacrifice. Regarding their victories, our sages teach that although they were not worthy of such miracles, they won in the merit of their bitachon that Hashem would save them from their enemies.

Picture courtesy of justtzedakah.org. Click here to get Dixie Yid in your e-mail Inbox or here to subscribe in Google Reader.
Posted by DixieYid (يهودي جنوبي) at 10:45 AM