Advice for Baalei Teshuva - What do you think? 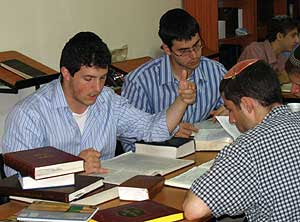 A friend of mine, also from back in Dixie, shared with me the following story that happened to him when he was becoming religious:

When he started going to Shacharis regularly at his local Shul, he heard someone bang on the Bima right as everyone was beginning to say Shemoneh Esreh. (This is done on Rosh Chodesh to remind people to say "Ya'aleh V'yavo," for Rosh Chodesh) He thought, "Wow, that's nice. They're banging to make sure everyone is quiet and to remind them that this was the time to begin Shemoneh Esreh."

Apropos to this story, he shared with me the following advice, for Baalei Teshuva:

"Never be the first to do anything.

Never be the last to do anything.

Never be the only one to do anything.

Never be the loudest to do anything."

What do you think?

i guess that makes sense.. on the other hand.. if you make mistakes in the open and aren't affraid to be corrected you will learn much more quickly than if you simply follow the flock without ever knowing why anything is happening.

personally i still think that some places they bang whenever they start shemonah esrei---it's especially annoying (if they dont) in certain shuls where the minhag is not to say the final berachah of birchot kriath shema out loud, if they don't bang, how do you know when they started? especially if you aren't exactly in pace with the baal koreh---something also highly likely in a minyan where they only say the beginning and the end of each paragraph out loud. (as a sepharadi i'm used to hearing the whole thing out loud and its very disconcerting when that doesn't happen)

Kinda reminds me of the story of the BT who became the gabbai in a certain West Coast shul. When it came time to call up the ones to lift & tie up the Torah, he cried out, "Yaamod Hava Nagila," instead of "Hagba v'Galila". :))

Your friend's advice seems pretty sound to me, but in addition to "dotted Yitz's" comment above, I'd add that one shouldn't be ashamed to ask why something is or isn't done. "Lo HaBayshan Lomeid," the embarrassed one doesn't learn, our Sages teach us in Pirkei Avos.

Thanks for the comments "Dotted Yitz" and Yitz,

It does seem like good advice I guess, but it is true that "lo habaishan lomed." It just seems like such sad advice! It's more of a recipe of how to avoid embarrasement due to ignorance.

Frumsatire put up a post awhile back on things to do to BT's. I think that this story should be added to his list. I agree with what you said but also with what Yitz says as well. Maybe they should teach certain things in Yeshiva like shul etiquette which might be obvious for some but not for others.

You know the story with the Bachur that came up to a Gadol (I don't remember which one). The Rav asked him where he was learning and the bachur answered, "At Ohr Someach, but I'm not a Baal Teshuva." And the Rav asked him, "Why not?!"

But to address your point, I wanted to find a picture of people learning b'chevrusa. That's why I chose that picture. I don't know anything about "Derech Eitz Chaim." But if that was what I'd meant, do you think I should appologize for accusing the talmidim of that yeshiva of being Baalei Teshuva??? By me, that's a compliment.

Good idea with the Shul ettiquette. But not just Shul eqiquette. Until two years ago (7 years into my marriage) I never wore a kittel at the Pesach seder. I simply had never heard that this is what one does. I'd almost always always made my own seder at my parents house (who were not observant) and then at my own house so I had no way of knowing and it was never mentioned in an Pesach shiur!

I hate the banging for additions in shemoneh esrai minhag there is no reason not to say the words 'yaaleh veyavo' or even 'don;t forget to say yaaleh veyavo' poskim say it is not a hefsek it is so much nicer and menschluch than a bang

I don't mind when just ONE person gives ONE bang, but when half the shul is banging away as if nobody heard the first, second, or even third bang, it becomes very distracting.

It isn't a baal teshuva yeshiva in the tradition use of the term. I think we all know which yeshivas are baal teshuva yeshivos and which aren't. That's not to say (as the story you tell suggests) that all talmidim, in all yeshivos, shouldn't consider themselves to be baalei teshuva. Thanks for the compliment.