Should one be mafsik his tefillah or Face Bomb Sniffing Dogs? 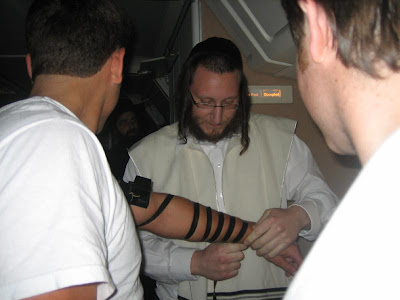 I was talking with A Simple Jew about this article about a man who was wearing Tefillin on a Chicago train. The other passengers thought it was a bomb and his teffilin straps were wires. When the conductor tried to speak to him, he didn't answer because it would have been a hefsek in his teffilah. This raised the alarms even more and they stopped the train and brought on bomb sniffing dogs. It was a major disruption.

What's the halacha on this? Can't one be mafsik his Shemoneh Esreh or his Birchos Krias Shema to prevent others from thinking that he is about to commit mass murder against them? Another angle: Isn't it less of a hefsek to interupt davening for a moment to explain than to try to daven while other passengers are screaming that he's a terrorist and being chased by bomb sniffing dogs? Anyone who has knowledge about the halacha in this field?

Click here to get Dixie Yid in your e-mail Inbox.
Posted by DixieYid (يهودي جنوبي) at 6:50 AM

I would think so. shulchan aruch 104:1 mishna brurah sham

chilul Hashem is docheh everything

I looked over there and all I can find is a heter to speak when a King or anyone who might kill you greets you or walks by, in a situation when he would expect to be greeted. Alternatively, there are more situations of distraction, where you may walk somewhere else without speaking to avoid the distraction. I don't see anywhere in the Mishna Berura over there that one may speak in a non-life threatening situation. Did I miss something?

Anon, is Chilul Hashem docheh Shabbos? We're not talking about where the cops are going to shoot you. It's a case of causing a major trafick disruption. Where does it say looking bad in front of the cops & other passengers is automatic license to do any aveira necessary to avoid it? You said it's "docheh everything." ???