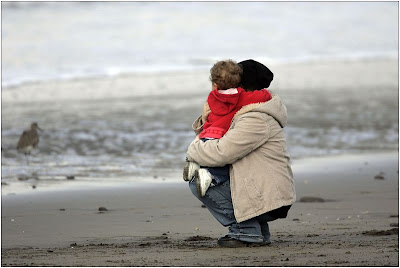 My kids are so cute and awesome that it is sometimes hard to take it sometimes. I have to share with you some of those "Out of the mouths of babes" stories from the kinderlach.

Story #1: Though it is not completely in line with the teachings on parenting by Rav Wolbe, the policy in our house is that we do, on rare occasions, use corporal punishment, in the form of a literal "slap on the wrist." That is usually upsetting enough to serve as a deterrent whenever it's needed. (For you legal beagles out there, that's utilitarian, not retributivist.) The other night, my 5 year old daughter (who sleeps in the lower bunk under our 8 year old) was making a lot of noise for a long period of time after bedtime, kicking the bottom of her sister's bed above her, etc. and generally preventing my "bechorah" from being able to fall asleep till well after 9 PM. Finally, after many warnings, my wife told her that if she didn't stop keeping her sister up, she was going to get a patch (slap on the wrist) when Daddy got home. She continued and so the sentence was sealed.

When I got home around 9:30, her older sister asked for some water. But she (the 5 year old) called out to me, "First give me my patch and then get her water!" I didn't know that I was supposed to give a patch, so after getting the water, I first went up to talk about what happened with my wife. While I was speaking to her, my 5 year old again called out to me with the most simultaneously amazing and sad statement. "If you wait too much longer to give me the patch, the yetzer hara (the evil inclination) will try to make you not give me the patch!!!"

I sometimes can't believe my heilig children. She was right too. I don't like giving patches and they know that I don't like it and would look for an excuse not to do it. When I gave her the patch, she willingly held out her hand. And even though she did cry afterwards, we ended with a big hug and a kiss. They know we only do that because we feel it is right and out of love, and not out of anger.

Story #2: Last Shabbos, my five year old was at the Shabbos table and she was saying, "Hashem is everywhere. He's upstairs. He's downstairs. He's even in the basement. He's even inside of me! Hashem is in my feet. He is in my arms. Hashem is in my legs. Hashem is in my tummy..." And then her 8 year old sister chimed in, "Yeah, and He is even in the Reshaim (wicked people). I called out in amazement that she was more right than she even knew! My kabbalistic children! My kids already understand the meaning of the Yeshayahu 45:7, "יוֹצֵר אוֹר וּבוֹרֵא חֹשֶׁךְ, עֹשֶׂה שָׁלוֹם וּבוֹרֵא רָע; אֲנִי יְהוָה, עֹשֶׂה כָל-אֵלֶּה." "He forms light and creates darkness, He makes peace and creates evil. I am Hashem, I make all of these."

ASJ, it sounds like you have been teaching your children well!

And for the record those are actual words he created and uses all the time.

We know 'lebonya' means something akin to 'yummy'.

Gelvaldik stories. I was just re-read R Wolbe's sefer a few weeks ago (I hadn't looked at it since 2000). It really is a must read.