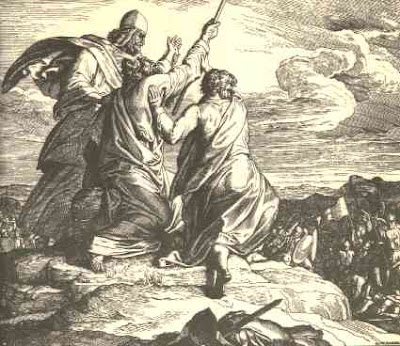 In response to a question by Yitz on his Guest Posting about wrestling with some of the issues involved in being a Ger and a Chassid, Ben Avraham made the following follow-up comment:

In response to Yitz.. he was correct in noting a difference between the main text and the final paragraph. As you already know it was a bit of an afterthought and my attempt at not opening up other issues explicitly I left some ambiguity.My point in the final paragraph was that while the examples we have discussed were particularly "chasidic" it would be mistaken to think these challenges are exclusively in the domain of Chassidus.

The fact is that there are a handful of issues we run into in the Chumash itself regarding our interaction with other nations that do not mesh well with how we like to think the world should work.It is in this context that I say our faith is not tied to actions bizman hazeh. The best example our battle with Amalek. There is much to say on this issue but we are told to do things that are not pleasant to even think about. Today we do not fight this battle on a level of gashmius but there was a time when we did. But at that time the "practical" situation was different, Amalek was a physical threat and an aggressor, and the spiritual situation was different, we were lead by Nevi'im and perceived open nissim.

Chazal teach, I'm afraid I don't know the reference, that when the first Beis HaMikdash stood and there where open miracles, people had a yetzer for avodah zarah that was comparable to the yetzer for physical desires. When the miracles ceased the yetzer disapated. Free will needs a certain equilibrium. Nowadays we do perform these actions physically, just concede that it would be right to do so because we are commanded by Hashem. Our emunah is based on mental acceptance of Torah's truth not on observation of Hashem's open activity in the world, so our avodah [in this respect] is one of mental acceptance.

While the average Yid had to battle Amalek in those days, I'm inclined to think it is perfectly appropriate for a Yid today to have difficulty relating to that avodah. The war against Amalek on the physical plain required actions that cause great hesitation, and for good reason. I believe it is with regard to destroying an idolatrous city we are taught that Hashem will give a certain siyata d'Shamaya to prevent us from being damaged spiritually. These actions are normally very detrimental.

Our emunah requires a lot of us in our actions, even misiras nefesh. But while we may be expected to give our lives (hopefully in the positive sense, today we are not expected to take someone else's. I hope this clarifies my intent in that final paragraph.