Follow Up to Responses on "The Moon's Lost Light" by Rebb. Devorah Heshelis 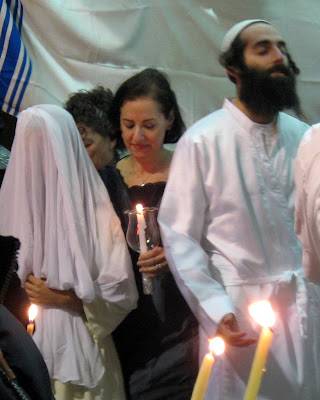 (DY: This post is a portion of Rebbetzin Devorah Heshelis' responses to HER ORIGINAL GUEST POST about her book, The Moon's Lost Light. - For those who would like to read more of her responses, you can DO SO HERE. As explained by Rebbetzin Heshelis in this post, I have decided to disable comments. After reading the book, those who wish to discuss the important issues being discussed here with her directly may do so at the e-mail address she indicates below.)

Well, I’m finally getting around to answering the comments made about half a year ago in relation to the post on my book, The Moon’s Lost Light. As I explained before Pesach, those comments only recently became known to me since I don’t have an internet connection and couldn’t read the blog directly. It was only when a neighbor discovered the dialogue on Dixie Yid’s blog and gave it to me, that I become aware of everything that had been said.

There were some points which raised questions that many people might be asking, and they deserve good answers. I put a great deal of time into trying to clarify these matters - so much, in fact, that I ran into a problem. My responses, which run for over 20 pages, were simply too long to put on a blog.

I doubt that the readers would be interested in wading through so many pages of responses to comments which appeared nearly half a year ago. I therefore decided to put only one response on the current post, and the other responses are being placed HERE. Those responses deal with many comments, including the comments of Ariella and Chaim B. that I hadn’t seen, and I also replied to Jacob’s comment, which I think is important..

It will not be possible to place more comments on the post, because I simply cannot go on answering comments and counter comments indefinitely. A question that takes three minutes to ask, can take over three hours to answer. Furthermore, I found that many of the questions were superfluous as the points were explained in the book. If, after seriously reading the book someone has a question they are very welcome to write to me at targum(at)targum.com.

Now for some of the replies:

Firstly, your problem is very understandable. I’m sure that there are many other women who feel as you do. Secondly, what you read on the post must of necessity be short and does not include many points in the book which you might find helpful.

As Dixie Yid told you, this book was written not as a practical guide, but rather to give women understanding. Nevertheless, I wish to relate to your points one by one.

You cited the gemmara in Maseches Brachos where Yeshayahu told King Chizkiyahu “Bahade kavsha diRachmana lama lach; mah di’alecho likapdi, Asei” which you translated as “Don’t worry about the greater scheme and how Hashem runs the world, just do what you have to.” So first I wish to answer this point.

When Yeshayahu told Chizkiyahu not to meddle in Hashem’s affairs and just to do as he should, he was speaking about a very different type of situation. Chizkiyahu knew that he would father a son who would be a rasha, so he did not want to marry and have children. But the law of the Torah is that a man must marry and have children. Because Chizkiyahu wanted to go against the Torah, Yehsayahu answered him as he did. This book, however, is saying that one must be careful to always keep the laws of the Torah. Once that is established, then there is nothing wrong with asking for understanding, as indeed we do in the tfila of ahava rabba (or ahavas olam) which is said before the Shma.

Is understanding alone, without practical advice, of any value?

After tisha b’av there are seven weeks where we read in the haftara about the wonderful good that will come with the ge’ula (redemption). Those seven weeks are called “shiv’a dinechamasa” the seven weeks of consolation. Why is this consolation? Has anything changed on the practical level? We’re still in the same galus (exile). Reading about the ge’ula doesn’t take away the problems of the exile. The answer is that just reading and thinking about the eventual ge’ula and all the good that will come with it, gives us the strength and joy we need to go on. If it hadn’t been for the prophecies of the ge’ula the Jews never would have survived the galus.

This same principle holds true for women today. Knowing that whatever bothers you is not forever, that there is a wonderful future awaiting you, is very encouraging, not only because of how we will benefit from this, (although that is certainly important) but also because it shows that Hashem didn’t relegate women to a secondary position because He thinks that this is good, or because He doesn’t care, cholila, but rather because it was necessary, and as soon as it is not necessary He will change this. I brought this out in the book, because for many women it influences their relationship with Hashem.

Furthermore, feeling virtuous or feeling subdued both have to do with feelings. So what my book is about is not giving practical advice, but rather about changing our feelings through understanding. I’m not saying that this will definitely solve all your problems, but it might help.

You ask, “Do I follow modern trends which are very appealing to me and in some sense make me feel more fulfilled, or do I do as I’m told and stick to the role of Jewish women that seems to be painted all over Jewish literature which seems in some way to be virtuous but makes me feel subdued? ....Does it imply that I should ignore the Torah sources because they were talking to a different point in history?"

You aren’t specific and I don’t know exactly what issues are bothering you, but I’ll try to give a general picture. Halacha is halacha, and it must be followed exactly. This really is being virtuous. Women today have more intellectual and financial opportunities than in the past. So long as these do not interfere in any way with the letter or spirit of Torah (such as tznius, or being a good mother) then go ahead and take advantage of them. In fact the book strongly stresses that women should develop their intellectual abilities. But if there is any contradiction between halacha, or even the spirit of halacha, then we must watch out, because this is the yetzer hara trying to destroy us. We still have to work at making a good Jewish home, it doesn’t just happen on its own, and a good Jewish home is no less important in our period than it was in previous ones. Those Torah sources were talking to a different point in history in some ways, but definitely not in others. As I wrote in the introduction to The Moon’s Lost Light, “Some people reading this book have described it as speaking of women’s changing roles, but I wouldn’t put it that way. Women were meant to be the bayis, the life and spirit of the Jewish home, and that is just as true today as it ever was. What the book speaks of is women’s enriched role” (The Moon’s Lost Light P.xxii).

Yes, you should develop yourself in a way that will make you feel fulfilled, but it you have to find the proper balance. This can’t be done through a book. Sometimes what is right for one person is wrong for another. For this you must speak to an understanding and reliable rav or rebitzen about your own particular issues. The mentor must be both well versed in halacha and hashkafa, and also very understanding of human nature and your particular needs. What is painted all over Jewish literature, as you put it, might be right for most women, while you might need to follow, or partially follow, the role model of a more unusual great woman in Jewish history. Every soul has its own tikun.

There is one more very important point that we all need to think about, both men and women. How many of us would be willing today to die for kiddush Hashem? In times gone by, how much did Jews sacrifice in their loyalty to Torah? Even a few years ago, what did Jews who kept Torah in the U.S.S.R. have to go through? There is such a thing as sacrificing al kiddush Hashem, and different people have to do it in different ways.

Nevertheless, people are also meant to be happy and fulfilled, and its important to find a way that combines loyalty to Torah with making you feel happy and fulfilled. This can’t be done merely through a book, it needs lots of personal guidance, and a general strong Torah hashkafa. If you want

to be in touch with me, you can do so by writing to me at targum(at)targum.com.