The Gaps That Bring One Closer - R' Binyomin's Drasha From Shavuos 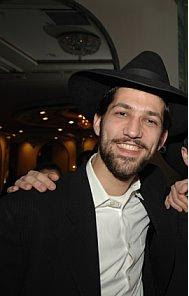 On the second night of Shavuos, between Mincha and Ma'ariv, Kehillas Aish Kodesh was zoche to have Rabbi Binyomin Tepfer, a Rebbe at HAFTR and a son-in-law of Rav Weinberger, give the Drasha. It was a great message that is relevant to how each of us approaches the challenges and obstacles to growth in ruchnius that we face on a day-to-day basis. IY"H, I hope to briefly summarize what he said here, though obviously I can't capture the delivery or all of the detail in a one hour Drasha. I also want to thank Rabbi Tepfer for clarifying a few points from the drasha as well.

Rabbi Tepfer introduced three sugyos where one finds the concept of a "Retzuah," a strip of some sort, which separates between the holy and the mundane, to which Chazal have an ambivalent relationship.

#1 The Gemara in Chagiga 25a teaches the din that if one brings wine or oil for the Beis Hamikdash from Yehuda (Judea), it is Tahor. But that if it is brought from the Galil, it is Tamei. "ביהודה אין ובגליל לא מ"ט אמר ריש לקיש מפני שרצועה של כותים מפסקת ביניהן." The Gemara asks, "In Yehuda, yes [it's tahor (pure)]. But in the Galil, no [it's not pure]. Reish Lakish says that this is because there is a strip (Retzuah) of gentiles which separates between them." Rashi there explains that since Kusim live in that strip of land, it has the din (status) of Chutz La'Aretz (being outside of Israel). He further explains that the Chachamim instituted a Tuma D'rabanan (rabbinically insituted impurity) on any wine or oil passing through Chutz La'Aretz. Therefore, wine or oil that will be brought through that strip from the Galil will be Tamei. However, Rebbeinu Chananel said that the Retzuah actually was part of Eretz Yisroel, but that because mostly gentiles lived their, the Chachamim were gozer (insituted) the Tuma status because graves and the like were not clearly marked there.

However, Tosafos ask another question. How were the people from the Galil who had to pass through this Retzuah/strip able to be oleh l'regel (make the pilgrimige to the Beis Hamikdash) three times a year? To offer the Korbanos, they would have to go through a 7 day purification process, which would add a week to their trip every single time! This seems so impractical. Why would Hashem set up this michshol, stumbling block, before people, by creating this disincentive to be oleh l'regel? R' Tepfer also asked what the meaning of the machlokes is, wherein Rashi holds that this Retzuah, cutting right accross Eretz Yisroel from East to West does not even have the status of E"Y, but that Rabeinu Chananel holds that it is indeed considered part of E"Y...

We see here another example of a "pesky" strip which gets in the way of the Tzadik Binyamin's feeling of wholeness in his portion in the Eretz Hakodesh, the holy land. First, we had the Retzuah of land creating Tuma/impurity problems for the residents of the Galil who wanted to be oleh l'regel, and now we find a tiny strip of land from Shevet Yehuda taking away what should have been part of Binyamin's portion, to the point where it prevents part of the Mizbeach from having a "Yesod," a foundation!

Rabbi Tepfer suggested the following common denominator in all of these sugyos relating to Retzuos: In all three cases, there is some interrupting separation between one's desire to connect to kedusha. In all three cases, that sepperator appears outwardly to be a lowly and mundane obstacle to holiness. But in each case, that obstacle was eventually shown to be the instigator for greater holiness.

#1 The Retzuah of Tuma that separated the residents of the Gailil from the Beis Hamikdash seemed outwardly like it wasn't even part of Eretz Yisroel (Rashi). But Rebeinu Chananel showed how even though it appeared unholy because of the kind of people living there, b'pnimius, deep inside, it really was still Eretz Yisroel. Also, that Retzuah which sepperated them from Yerushalayim and aliya l'regel ended up causing them to spend an extra week in Yerushalayim three times a year in preperation for Pesach, Shavuos and Sukkos. In all liklihood, this probably caused them to be even more influenced by holiness than people from other parts of E"Y who came to Yerushalayim only a very short time before the Chag. Also, he suggested that Hashem caused this challenge/opportunity to fall in the lap of the Galil residents because they (who live in Tzfas, Meiron, Tiveria, etc.) were more attuned to how Hashem causes aliyos (growth) to come to people through yeridos (problems).

#2 Binyamin felt that that this little Retzuah of land from Yehuda was taking away from the completeness of his kinyan, his ownership and connection to the holy land. Also, Binyamin was the brother of Yosef, the Tzadik Yesod Olam, the foundation of the world. But since he did not have the portion of E"Y at the point of the south-eastern corner of the Mizbeach/Alter, that point lacked a Yesod, foundation since it lacked that connection to the Tzadik Yesod Olam. However, it was davka (specifically) because he was so bothered by wanting to have an even more complete portion in Eretz Yisroel that Hashem responded by decreeing that he would be zocheh to have the Kodesh Hakodoshim, the Holy of Holies, housed on his territory. Through his feeling of the incompleteness of his avodah, he was zoche to have so much more than he would have had, had he felt complete in his avodas Hashem, without that Retzuah standing in the way.

#3 According to the Shulchan Aruch, who holds that Retzuos (tefillin straps) do not need to be colored lishmah, just like the Batim, the Retzuos are part of the Tefillin. According to the Yam HaChochma on that se'if in Shulchan Aruch (33:4, year 5767), the Mechaber holds that the Retzuos are the essence of Bina, just as the Batim are, and therefore neither require coloring for the sake of the mitvah. They are already the essence of Bina and don't require coloring lishma. Therefore, the Retzuos are part of the tefillin. However, the Rema holds that the Retzuos are not the essence of Bina, unlike the Batim, and therefore must be colored lishma. The Mechaber, however, who shows the influence of Kabbalah throughout Shulchan Aruch, is more in tune with the side of Bina, and therefore he is more inclined to see how the outwardly non-tefilin status of the Retzuos hide within it a deeper reality, wherein the Retzuos have the same kedusha status as the tefillin themselves. He doesn't view them as a sepperation between the person and the kedusha of the tefillin. rather, they are just as holy in that they are the medium through which one can access kedusha.

The common denominator in all of these cases, which is the same one that we can see in our daily lives, is that the things which stand in our way of achieving the levels in holiness that we know we should reach, are there just to make us want it more. That feeling of incompleteness, of wanting more but not getting it, is the source for so much more growth in Avodas Hashem than immediate success in avodas Hashem would have accomplished.

Great job on the summary- Can you add the mashal from the end of the shiur?

Remind me of the mashal again...? I can't recall it off the top of my head. Is this Bruno?

Bruno checking in. The mashal was about a poor man who sent a broken gift to the king, hoping that the king would think it broke during shipping. I was a bit confused about the nimshal, so I was hoping your summary would include it.

The nimshal was not to disown (i.e. sepperately package) your faults. Rather, you should package up your faults together with your ma'alos and send them both to Hashem together. i.e. You should realize that the broken parts of you are also part of the gift that Hashem wants to receive from you. They are just as much a tool to get closer to Hashem as your ma'alos are. This is in line with the main point of the speech which was to realize that those retzuos, things that sepperate you from kedusha, are really there to connect you more deeply to kedusha by increasing your desire for it.