A Mehalech to Succeed as an Oleh to Israel 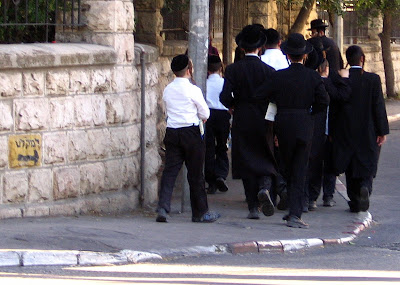 Rebbetzin Yehudis Golshevsky left the following comment on yesterday's post about the difference between living in Amercica versus Eretz Yisroel. She was specifically responding to some commenters who were challenging my friend's glowing description of the potential for spiritual growth in Israel.

While it's true that not all olim from the States succeed here, part of that has to do with a basic unwillingness or inability to adapt to the realities of life here.
I'm not only talking about the standard of living, but rather about a whole mindset. And as for "no chinuch," perhaps part of this is because there's no basketball. I don't mean that exactly, but that American kids who are already used to greater freedom and "kid-ness" in their chinuch may very well have a serious problem when they come to Israel and enter the chareidi chinuch system. Plenty of American olim go crazy over the fact that gym doesn't exist, that the learning here for the children is more demanding. Of course, it depends on the school. Not everyone can adapt to a Yerushalmi-style chinuch.

On the other hand, many American olim specifically seek out a Yerushalmi-style education for their children because they don't want their kids in schools where unsavory influences are tolerated.

Generally, I've found that the kids who do best have parents that come knowing that they will have to change and who look forward to the prospect. Yes, your daughter's Beis Yaakov here will call you to the carpet if you decide to go out in a denim skirt, no matter what the length or breadth. It will not be comfortable. A mother who balks at making a change like that is generally going to find that her children don't adjust well either.

When I was in seminary, I read a story by Dovid Zaritzky about the yishuv hayashan called "Dmut shel Yerushalmi" in the volume "B'tzeil Tzach." In it, he very poetically described the process of the newcomer to the yishuv gradually letting go of his "yekishkeit" "litvishkeit" etc. to embrace the overarching identity of "Yerushalmi," with all that it entails. Of course, we're not talking about that exactly here, but it had a profound influence on me. (Ramat Beit Shemesh not exactly being Meah Shearim, except for those part of it that are. But American olim don't usually move there.)

Rebbe Nachman says that a person who wants to be an "Ish Chayil" has to go to Eretz Yisroel. One meaning of being an "Ish Chayil" is that one goes "m'chayil el chayil"--you have to be spiritually intrepid, be willing to put yourself on the line a little. It is not always comfortable here, but it is worthwhile--a million times over.

Of course, I came here fairly young, married here, am raising my family here, and never go back to the States. Our kids know that we find America to be a negative environment for us; that's why we're here. There are good people and good communities all over America--I know this from experience. But the bnei aliyah in them know that Eretz Yisroel could give them something that they cannot get at home. For many reasons, they stay. My only sibling is in outreach in the States--she and her husband are doing what they need to for klal yisroel--and I respect that. Not everyone can come right now. But I do believe that everyone should at least want to come, even if the "yishuv" is not perfect. Progress, not perfection.

As the Tzemach Tzedek famously said to someone asking for rshus and a brocha to make aliyah, you have to makee where you live eretz yisroel.

One of the teitches to what's said that the yidden were put in golus for no other reason than to get geirim is not only physical gerim but the nitzutzos that are hidden - avodas haberurim. Hashem hid these things throughout the world. That's also why we can't live in mitzrayim - we took all their treasures (nitzutzos) with us such that there are none left and no yid should have anything to do there today. Don't ask me about Rambam : )

Of course that doesn't mean there's anything wrong with aliyah. But it's only a lechatchila if your Rebbe sends you there; then you know it is Hashem's ratzon. You may just have an important mission to do chutz laaretz. "But I do believe that everyone should at least want to come" Yes - with moshiach! Until then I'm busy working on what the RSO sent me to do here in golus.

Just a side point: the Rambam's family fled to Egypt because of the Almohad oppression. The Almohadim were one of the few Muslim sects that advocated forced conversions of Jews, and they were extremely violent. They swept through Andalusia and then North Africa, and Egypt was one of the few places in reach that was not under their authority.

Menashe, Dixie Yid posted my comment to someone else's post as a post on its own, but you have to realize that I wrote it as a response to someone who was very derisive about aliyah.
It's clear that many people have tafkidim in chutz la'aretz now--but that doesn't mean that one should lose sight of the ultimate goal.
Wanting to come is exactly about wanting to come "with Moshiach." It's not about the continuation of golus here in Eretz Yisroel, which is the current situation.
Unfortunately, I think that for many people, the teirutz that they will come when Moshiach does (when the gedolei ha'dor insist upon it, etc.) is a very kosher method of not having to live in a state of actual longing for geulah. I do not mean any kitrug, G-d forbid. It is only natural because "tocheles memusheches machalas lev"--"deferred hope breaks the heart." Who can always be longing for something that has been deferred for so long? It is not easy to really fulfill the 12th Ikar of the Rambam.

Rebbe Nachman lived in the Ukraine, but he said, "Every step I take is toward Eretz Yisroel." He obviously didn't mean that literally. He meant, like the Tzemach Tzedek said, that when one is spiritually connected with Eretz Yisroel *through longing for it*, one is said to always be "on the way" even when trekking from Minsk to Pinsk.
Men ken nisht machen "du" Eretz Yisroel b'poel ohn a shtarke benkschaft to zein b'poel "dort."
At least, this is my take on it.

Menashe: The Rebbe said that the avoda of "macht du Eretz Yisroel" is finished (heard from R' Yitzchak Ginsburgh). He also said that about avodas haberurim.

Also, there's a story in the Gemara about an Amora in Bavel, who HID AWAY FROM HIS REBBI in order to go to Eretz Yisroel (as his Rebbi was opposed to such based on certain psukim).

Something to think about.

I prefer to stay away from such statements because I don't believe anyone (yes, literally anyone) knows what such things mean, aside from the Rebbe himself. Some things he explained clearly and some things he left esoteric. Certainly the Rebbe never instructed our avodah to change based on such a statement.