Scribal Errors in the Torah? 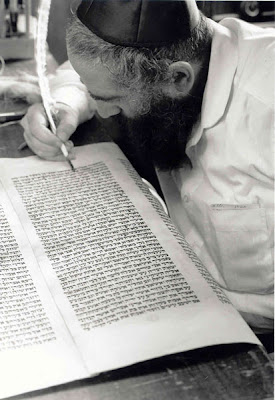 When I was studying with the reform rabbi at the Temple I went to in 10th or 11th grade, he shared with me one part of his denial of the 8th fundamental of Yiddishkeit of the Rambam, that every word of the Torah that we have today is the exact same text as we received from Hashem at Har Sinai. He pointed out a certain discrepency in this past weeks parsha. In Breishis 32:31-32, it says, " וַיִּקְרָא יַעֲקֹב שֵׁם הַמָּקוֹם, פְּנִיאֵל: כִּי-רָאִיתִי אֱלֹהִים פָּנִים אֶל-פָּנִים, וַתִּנָּצֵל נַפְשִׁי. וַיִּזְרַח-לוֹ הַשֶּׁמֶשׁ, כַּאֲשֶׁר עָבַר אֶת-פְּנוּאֵל; וְהוּא צֹלֵעַ, עַל-יְרֵכוֹ.." "And Yaakov called the name of the place Peni-el 'because I have seen the divine face to face and my life has been saved.' And the sun rose for him when he passed Penu-el, and he was limping on his thigh."

This rabbi pointed out that one pasuk calls the place "פְּנִיאֵל" and the very next pasuk calls the same place "פְּנוּאֵל." He attributed this not to any intentional difference in spelling/pronounciation, but to the fact that various scribes probably just made some mistakes that got into our sifrei Torah. I didn't and obviously still don't believe that but I had wanted to know ever since then what the pshat was in that quick change in spelling in the very next verse.

I had heard the explanation that since letters like "yud" and "vav" are interchangable, that is why it changes from Penuel to Peniel between psukim. Perhaps someone can help me out in understanding this, but that doesn't really answer the question as far as I can see. It is true that these letters are interchangable, and this can explain why two similar words with different meanings and different contexts actually share a shoresh, but it does not explain why the word should be spelled/pronounced differently so close together.

Then I came across the Ohr Hachaim on this pasuk who explains that every other time this city is referenced in Tanach, it is called "Penuel," but that the name Yaakov gave it here was Peniel. Meaning: Because of the significant experience Yaakov had there with the Sar Shel Eisav, Yaakov made a play on the actual name of the city, as if to say, "This place shouldn't be called 'Penuel,' since I saw the face of the divine, it should be called 'Peniel,' with a spelling that indicates 'face of god' to reflect my experience." While in the next pasuk, it is talking in the third person about Yaakov, not quoting Yaakov himself, so it calls the city by its general name, "Peunel."

This explanation makes sense in the simple meaning of the verses. When you look at the facts that the Ohr Hachaim brings, it actually seems so obvious that it's crazy that people use this as a proof at all against the Torah. Kol tuv!

mayb is this a sign that yaakov was chassidish influenced. they pronounce the U as an E. :)
gite (gute) woch!
fritzi

That is very funny! Good one!

see also the lubavitch chumash, for an alternate pshat on yod= malach of the 10th and highest order; the 'vav' then is probably the six directions....