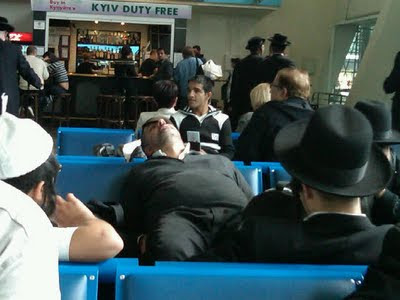 We all had the most uplifting yom tov. Words can't even come close to explain the experience that one has being joined by thousands. There were people from a multitude of countries, including England, France, Canada, Israel, Spain, Africa, Australia. Russia, Ukraine. To be in a place that is so special - joined by over thirty thousand people all overcoming so many obstacles. You can talk to an array of people and hear the most amazing stories.
I would like to share one experience that we had on our trip to Sofia Park, for all those wondering what is Sofia Park it was built as a memorial for the Nobles daughter that was murdered, protecting the Jewish residence of Uman Ukraine. I was walking together with Yackov S. when Reb Yackov stopped to talk to an individual that was rather large and very tall. I joined in their conversation and I found out that the fellow was from South Africa, I asked what do you do? He replied I am a farmer. That's interesting, he then told me he came to be in Uman together with the Rebbi and all the chassidim. It turns out that he actually is responsible for funding the Security for Uman over Rosh Hashana long with the other expenses. Looking at the fellow he was wearing a safari hat a pair of worn jeans- wow who would have ever expected. 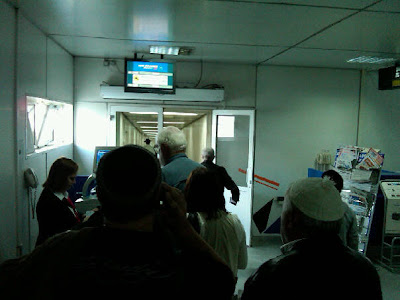 In Uman there was three massive stations set up to feed those in need of a meal. We all witnessed the Chesed in amazement - literally thousands of beautiful meals.
The Kaloz the big shull bursting at its seams. The safardi minyan down stairs didn't even have standing room nor did the main minyan. Once seated B"H we had great seats you couldn't leave - the aisles were totally crowded. If you are thinking this must be a safety hazard, the answer is to just climb over the benches.

The Tzion of the Tzadik Yisod Olam was very well attended, however the general atmosphere was so pleasant. The most beautiful part of our trip is to see how all of our jewish brethren from the most pious to the most secular. That is part of the draw because everyone feels comfortable. A special treat was that Reb Zev P. was finally able to overcome all the challenges and join us, ashren'u. This is part of the experience recognizing the chessed of Hashem. Watching the great collection of neshomas coming together to make the Kibbutz (gathering).

There were minyonim on most street corners, of course many minyonim by the Tzion itself. A group of the five towns Chassidim actually joined the safardi minyanim. At the Safardi minyan the entire tifila is sung by the peole along with the sheliach Tzibor, it is a very moving experience.

We are on our way to Berditchiv then Borisooll International airport.
A gut Yar to all.
Chaim

Picture courtesy of Simcha Goldberg. Click here to get Dixie Yid in your e-mail Inbox or here to subscribe in Google Reader.
Posted by DixieYid (يهودي جنوبي) at 8:04 AM

Yashar Ko'ach! Three of my children were there as well.