Posting (Almost) Live From the Uman Drive - By Chaim - Part 1 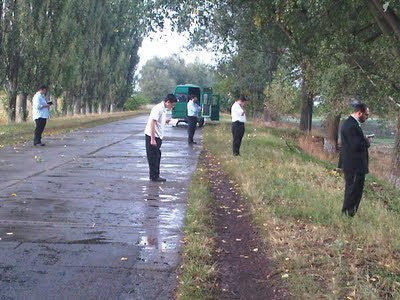 Sholom chevrah,
Well B"H we left NY without any glitch, yep it really went as planed. We landed at Schipol international in the Netherlands just in time that the airport was still asleep. After gathering together we began Slechos of the third day. The terminal was so deserted, we were able to charge all our electronic devices- at the check in counter while we were davening. B"H we made the Naitz Zman. Who would ever believed that we would be able to gather in such a place and pour our hearts out to the Borah Olam. We were then asked to leave the terminal and clear european standard check in, what a joke. We waited for about 40 minutes on that ridiculous line, we all cleared security along with the Hisa chassidim that joined us on our trek to Rabbanu Hakodosh. We are now on the Ukrainian Airline aircraft and they are insisting that I shut off my device as to not delay the travelers. Catch you all later signing off.
Chaim 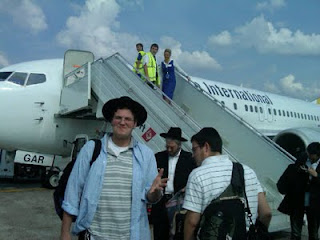 Hi chevra,
What a difference from an american carrier to one of the ukrianians????? They made a mistake and they sat us in a plane designed for sardines, what a joy to sit next to the Six foot four Zacharia Shlomo (ZACK) well his company is the best but there is the matter of space. Oh Vay, B"H its only three hours, they gave us an alkaline breakfast,(fruit) green bananas without the banana freckles and apples with. Well we took off in a timely manner surprisingly considering there first class security (ha ha) they were abrupt with us. Perhaps they are envious of our tallasim no probably the Teffilin. We met a Jew from Pennsylvania, he was so scared to daven in the airport he felt they would rob his tallis and Teffilin. Well we are about to land, our trek will lead us through Ukraine Border control- push back- DON'T Cross the yellow line on the floor, for if one dares to disobey they shut down out of desperation (push back) we will try to receive our bags and find Leon, our limousine driver (well its actually a 1990 van) it's sure better than the donkey and wagon idea.
Signing off catch you all later I'Yh in "haditch" the mokom of the Bal HaTanya.
Chaim

"Financial Assistance Needed"
Hello my dear friends,
You must be wondering about the title of this post? Alright let me explain, we arrived at the Admor Baal Hatanya (pictures on the side by Simcha Goldberg) the Rebba is surround by a wonderful compound of buildings. For those who remember from last year, ah what a memerory it is constantly there to be michazic us. The up keep of the mikveh on the compound is a true task, keeping the water so pleasant. We met a couple from Moscow there then some fellows from South Africa, talk about along trip. Now for the financial distress, beatiful tzion and bais medrash, mikveh but no electric!!!!!! coulld. 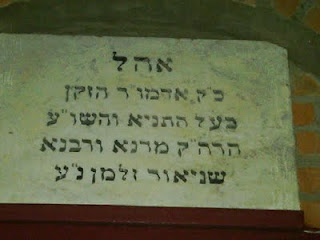 It be? Unfortunitly yes and it is. B"H we had all sorts of flash lights, and we made the best of it. I was thinking how many people ever have the zechus to vist the makom tzion of such a great tzadick. Who ever learnt any of the Rebbas sichas or the Tanya itsellf can appreciate what I mean. There are tens of thousands of chasidim visiting the Ukraine each year, how many make it to Rebba the Baal Hatana. The group was in awe, we all know that Chazal taught us that after the pitirah (departing) of a Tzadick the Neshomah becomes boundless and can be "poel" yeshuos that were not possile in the life of the tzadik. We are all back in the limo on our way to vilednick, I wll keep you posted on our to shepatepska, annapooli, mezbitz, berditzov, brelov and then UMAN. Stay tuned you all are great!!!!!
Chaim

Hi every one, B"H we had our meniyos (obstacles, forces that come to prevent) the being and IY"H the end. Well let's just say that things worked out very different then we expected. For starter Scott Loffman bag was lost, the phones of course weren't working, the driver changed his pickup location because of the mafia, that was just some of the issues. But we B"H learned that these challenges only prove the dire importance of our journey, for our most wonderful families and the rest of amicha yisroel. Well we fixed the phone problems, thanks Judy for stepping in to rescue Reb Simcha. I bought a new Kyvister phone with russian letters really cool. We stopped on a beautiful road to daven mincha (see picture), a corn field at that. 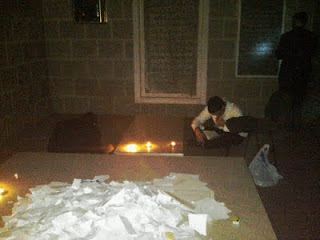 As we began to daven shemona esrai hashem sent a very slight drizzle- perhaps a wink saying Kinderlach your doing a good job. Chazal teaches that rain is a bracha in the right time and measure. Our first journey is to thee small town of Gadich the place of the Bal Hatania. The lubabicher rebbi never carried an umbrella, he said that the rain is a bracha why should he create a chatiza(separation) between him and the bracha. We all davened B"H with Conviction feeling the droplets. Well we are off back in the limo and enjoying the view. Judy yes Zack is in shock that he didn't pass any mall as of yet 300klm later.
Keep you all posted!!! IYH
Chaim and the gang!!!

We would love for some of the chevra to cheer us on!!!!! Go chevra!!!! Any questions any requests for some special tefillos -send them,,, don't be shy!! We all will be facing our maker in the next few days-lets try too be ready!!!
Chaim
Dixie Yid: If you e-mail me or leave a comment on this post with any tefillah requests or chizuk for Chaim and the rest of the Woodmere/Uman chevrah, I will be sure to pass it on to them, IY"H BL"N.

Picture courtesy of Chaim. Click here to get Dixie Yid in your e-mail Inbox or here to subscribe in Google Reader.
Posted by DixieYid (يهودي جنوبي) at 6:01 AM