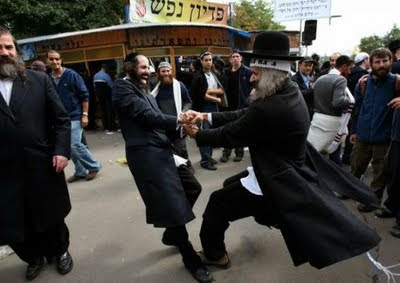 A selection from Rav Itchie Mayer Morgenstern's Torah this week discusses an inyan in Parshas Nitzavim-Vayeilech. That piece follows and Rav Itchie Mayer's full Torah from this week on the Parsha is availible for download after this selection in pdf format below:

...This explains why we say Selichos. We admit the truth and tell Hashem that we recognize the magnitude of our sins and that we wish to refrain from such negative behavior in the future. And Hashem says, “I have forgiven in accordance with your words.”

Although Hashem is with us wherever we may be even when we sin, we must take care not to allow this to serve as an excuse for continuing negative behavior.[1] Instead, one should think simply that Hashem wishes us to acknowledge our sins, not to falsify His Name. We must do teshuvah with clear understanding and honest acceptance to change for the better.

This is similar to the famous gemara that if even a completely wicked man asks a woman to marry him on condition that he is a completely righteous person, she must get a divorce from him, since perhaps he had honestly entertained a thought of teshuvah at the time.[2] We see that teshuvah is a process in the mind, in one’s Da’as.

This is how the verse in Parshas Vayeileich will be fulfilled: "כִּתְבוּ לָכֶם אֶת-הַשִּׁירָה הַזֹּאת"—“Write for yourselves this song...”[3] Although this verse is referring to Parshas Ha’azinu which is to follow, we can also understand this as an exhortation to restore the letters [of the commandments that were violated, and which are “etched on one’s bones”[4]] to their original place, so that the beautiful fourfold song of the ultimate future will ring out.[5] [Our sages teach that when a person develops true understanding it is as though the Beis Hamikdash has been rebuilt in his time.[6] We see that, for him at least, the rectification has already materialized. It follows that one who restores his understanding by doing teshuvah accesses this song to a certain extent.]

This is why it is important for a person to travel to the tzaddik on Rosh Hashanah so that he can search for what he has lost. He does this by searching out his heart to ensure that he speaks truthfully from his heart. This is the only way to complete one’s mission in Divine service by truly returning to Him, heart and soul, and meriting redemption, speedily in our days, Amen!

Click on the following links to get Reb Itchie Mayer Morgenstern's Torah on Parshas Ki Savo:

Click here to get Dixie Yid in your e-mail Inbox or here to subscribe in Google Reader.
Posted by DixieYid (يهودي جنوبي) at 8:10 AM

How can I get a copies of Rav Itche Mayers seforim?