Why Do Some Who Commit To Making Aliya Ultimately Not Succeed? 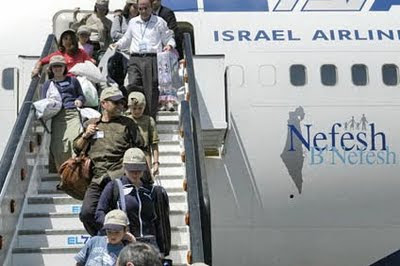 I wrote once about how Rav Weinberger taught that when you make an absolute decision to do something, even when it's not within your actual abilities to do it, Hashem gives you the kochos you need to succeed.

I was thinking about how this applies to aliya. I know there are many people who make aliya who don't succeed there and either return after a couple of years or have major problems there, such as when their children do not stay on the derech to one extent or another. If people make a real decision to uproot their lives to fulfill mitzvas yishuv ha'aretz, why do some people seem to not get the kochos they need to be matzliach there?

You could answer that the people who are ultimately unsuccessful in staying in Israel did not make an "absolute" decision to make aliya, but rather had it in the back of their minds that they could always come back to America if it didn't work out. If this is the case, then you could attribute the fact that Hashem didn't give them the kochos to succeed to the fact that they did not make the absolute commitment to make aliya to begin with.

It's probably true that this is the case for many people. But I would also wager that many people who do go with the 100% intent to stay are also unsuccessful. How can this be explained?

And in general, people often decide to do various mitzvos or take on madreigos in avodas Hashem that ultimately don't work out. How can this be?

Perhaps some people who are not successful in the end in making aliya or taking on some madreiga were unable to make an objective assessment about whether that move is what Hashem wanted of them at that particular time. Of course everything that happened in the past is ratzon Hashem in the sense that it was hashgacha pratis that whatever happened, happened that way for a reason. But mitzad the person's perspective, perhaps if one takes on something that is inn appropriate for him for some reason, that decision will not be supported by the Divine Assistance that one who makes an absolute decision to do something that is right for him will be met with.

For instance, maybe someone's not on the level of emunah as a general matter to rely on Hashem for his parnasa if a job is not already lined up for him before he moves. Or maybe one made the decision to make aliya without properly considering whether his teenage children could adjust in a healthy way to the new culture and language. I could never speak about the emes of any particular individuals situation, but if this were the case and one decided to do mitzvas yishuv ha'aretz without fully considering whether it was really ratzon Hashem for him to do so, then perhaps that Divine koach to succeed will not be given.

This is a musing and not a final opinion of mine, and I would certainly be interested in others' thoughts...

Picture courtesy of Israel News Agency. Click here to get Dixie Yid in your e-mail Inbox or here to subscribe in Google Reader.
Posted by DixieYid (يهودي جنوبي) at 6:00 AM

Based on my observation, the people who were sucessful to make aliya were the one's who did not overthink it. Those who contemplated it too much and all its ramifications never were able to be matzliach.

Rebbe Nachman of Breslov tied the concepts of emuna, tefilla, Eretz Yisroel, and miracles together in Likutey Moharan I,7. From this we see that one who tries to make a "rational" decision to make aliya, ultimately will not be sucessful.

As to the response formm Simple Jew, that would make sense when it is a matter of gashmiyus problems, but what about the very real problem of chidren not adjusting and falling in their ruchniyus, sometimes with major damage? I asked Rav Yisrael Weintraub, a great mekubal from Bnei Brak, a few years ago about making aliyah, and he said that the Steipler told him that a family with children in school should not move until they get older. Rav Weintraub told me not to come until my children are older. It's well-known that Rav Orlowek is very against moving school-age children to Israel because of the danger of them going off the derech. I have a friend who moved back from a community in Israel to Boca Raton, Florida, for chinuch reasons, and says that his children are much better now! I also asked the former Biala Rebbe zt"l about moving there many years ago, and he said that people should not rush into such a decision, but make a pilot trip and really see if it will work for them. I'm sure that other Rabbanim will disagree, but I just want to share that there is this point of view. Those who have the zechus to live in Israel should not be so quick to criticize those of us who deeply yearn to do so but do not see that as Hashem's will at this point.

>>>people often decide to do various mitzvos or take on madreigos in avodas Hashem that ultimately don't work out. How can this be?

The short answer: Who says just because you decide to do something it means you are guaranteed to succeed? Kushya m'ikara leisa...

(The longer answer: Remember the story in Chazal of the guy who climbed up the ladder to perform shiluach hakan and fell off and died? The attitude that all must work out is a very dangerous error that led to Acheir abandoning faith completely. Secondly, the insinuation that those who were not successful lacked committment or emunah is insulting to those who make a sincere effort and must return. Thirdly, the idea that a person should not make a "rational" cheshbon as to whether his aliya will be successful runs counter to the thrust of halacha, which does take into account factors like danger (Tos end of Kesubos) and parnasa (Shu"T Avnei Nezer). Rishonim and Achronim did not advocate just throwing caution to the wind and trusting that G-d will make their trip successful or that they will find parnasa.)

As to why there's a kasha, see the post I linked to at the beginning. That was the basis for the kasha.

Second, with your answer with the ladder/shiluach hakan, it's sounds like you're accidentally conflating different meanings of the term "succeed" or "work out." As I indicated in my post, and the one it linked to, "success" as used here means succeeding at doing the mitzva one set out to do or attaining the madreiga that one set out to attain. It was not referring particularly to the kind of success that you were talking about, i.e. things (not necessarily related to the actual attainment of the mitzva) worked out "well" in the end, and i.e. "a happy ending."

As to your point that "the insinuation that those who were not successful lacked committment or emunah is insulting to those who make a sincere effort and must return," perhaps you didn't read the paragraph after the one you were referring to. I brought that idea up as a hava amina/potential teretz which I rejected.

As to your point about the importance of indeed making a "rational" decision, perhaps you were arguing more on A Simple Jew on that point. You make take a position on one extreme that one should always make rational decisions. Others might theoretically take the opposite extreme position and say that one should make decisions without cheshbonos at all.

My point was to take a middle position whereby we recognize the important place that both of these approaches have when done in the proper way and applied when they are really appropriate.

There are times when one should not take heed of rational obstacles to the success of a mitzva or a madreiga. That's the point of the Gemara in Kiddushin. We have to daven for success and do our hishtadlus to succeed even when it's impossible, because Hashem will help us.

On the other hand, my point was that we see practically speaking that superficially, this does not always seem to work. And I was answering that this could be because we are not applying the "do it notwithstanding the seeming impossibility" approach properly. In those situations when the thing we're taking on is not the ratzon Hashem, we shouldn't expect the hachlata to lead to a miraculous attainment of the impossible.

I'm not sure of what distinction you are trying to draw between meanings of success. I want to do shiluch hakan; the ladder falls. I want to sit in sukkah; it rains. I want to make aliya; I can't get a job and have to come home. All of these cases share the same common denominator -- Hashem can cause the best laid plans of mice and men to fall apart. Please point me to a source in shas/Rishonim that says otherwise.

>>>There are times when one should not take heed of rational obstacles to the success of a mitzva or a madreiga. That's the point of the Gemara in Kiddushin.

The sugya is discussing schar mitzvah b'hai alma (leika). There is no rational reason not to climb a ladder.

Again, it may be difficult for you to ask these questions without reading my post and the earlier one its kasha was based on. I could restate what I said, but I would recommend rereading both for more clarity.

As to your question on the gemara in Kiddushin, again you have to read read which part of that gemara that I was quoting in order to ask a relevant question. It was not the part about schar mitzva b'hai alma and the case of the ladder. It was the part that says that it is impossible to completely overcome the yetzer hara, and that one can only do so with Hashem's help.

Would you say that because it is impossible, on a rational, human level, to overcome the yetzer hara, that we should not try to do so because "ein somchin al haneis"? Of course not. Why? Because doing mitzvos and avoiding aveiros (i.e. fighting the yetzer hara) is the Ratzon Hashem.

The point about chinuch and children, especially older children, is very important since the raising of derech eretzdike children in Israel has particular challenges. In some ways chinuch here is much easier, in others it is far more complicated, and so the subject is very sensitive.

The thread brings to mind what Rebbe Nachman said, that anything that is important for a person's Yiddishkeit is bound to come with obstacles, it's part of the program, and for different people the obstacles are different.
Is there ever a point at which the obstacles are so profound that one should just not undertake the effort? My teachers taught me that the question is: Is it "important for my Yiddishkeit?" Is it something I really need for my spiritual development? If it is, and the only way I will discover if it really is will be by expending much energy in hisbodedus and turning to trusted advisers, then I might just have to throw myself into it fully no matter what.
But "no matter what" is scary, because people who have this level of commitment to anything important are hard to find; they are baalei bitachon, and they are rare.
The issue is not aliyah, it's about anything that is vital to a person's Yiddishkeit.
This is different for each of us.