Posting (Almost) Live on the Uman Drive by DOV - Part 2 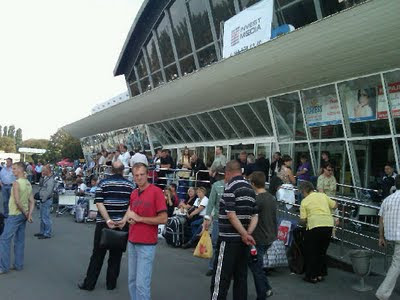 We landed several hours ago and stood on line at customs for over an hour. There are actually no formal lines just 1000's of people trying to force their way to the front from all sides. Just as we reached the front of the line we were joined by our dear chaverim Shmuel and Jay. Jay joined our group to go to Mezibitch to the Baal Shem Tov and Shmuel opted to go straight to Uman.

We made immediate contact with our faithful Driver Leon and boarded the Green coach. No sooner then we got in the Ukrainian mafia hassled our driver for money, they negotiated 20 dollars out of us. 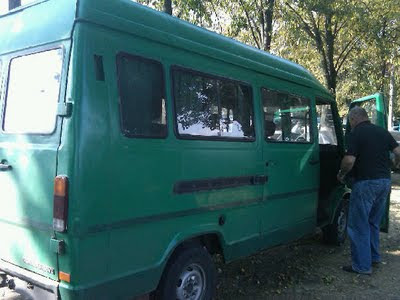 Jay shared some amazing stories with us about his great grandfather who is from the Ukraine. They had 13 children and lived on a farm. Some soldiers came to their home to round up their boys so the father hid them in large ovens in the basement. The soldiers looked everywhere for them convinced that it was impossible that there were no boys tending to a farm of this size. The soldiers told Jay's great grandfather to light the ovens. When the soldiers turned their back he picked up a log and beat them to death and buried the soldiers under their home. Needless to say the boys were saved but not for long. Pogroms hit the Ukraine and the Russians killed anyone that owned land to give it to the peasants. So they left home with the shirts on their back. Only six of thirteen children would survive the 1 year trek along the Ukraine to escape to the United States. In fact one night after the father returned with a shovel in his hands from burying one child, his wife sent him back out upon his return to bury yet another. The rest survived and built a life in the USA in the late 20's. How humbling, we worry when our AC stops working or we have a flat tire, a bad day at work, or when the first chill of winter moves in. These yidden were Moser Nefesh beyond our imagination or comprehension.

We stopped briefly on the side of the road to daven Mincha. We ate crackers, phony bologna. cheese sticks, and hearts of palm. Our faithful driver Leon presses on into the night closer and closer to the father of Chassidus, the holy Baal Shem Hakodosh.

Picture courtesy of Simcha Goldberg. Click here to get Dixie Yid in your e-mail Inbox or here to subscribe in Google Reader.
Posted by DixieYid (يهودي جنوبي) at 2:53 PM