Using Physics to Explain the Process of Teshuva 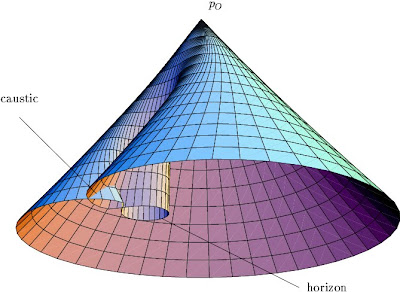 At Shalosh Sheudos on Shabbos Shuva, Rav Moshe Weinberger quoted a Yerushalmi in Brachos 9:5 (68a) that gives an analogy to explain why, when we leave the Torah for one day, it goes away from us for two days.

Rav Shimon ben Lakish said in Megilas Chassidim, they found that it is written "If you abandon me for one day, I will abandon you for two." [He gives an analogy of] two [people] who left, one from Tiveria, and one from Tzipori, and met one another in an inn. When they said goodbye to one another, one walked a mil and the other one walked a mil. It comes out that [even though each one only walked one mil] they are two mil from one another.

He brought down an explanation from the sefer "L'horos Nosson" from Rav Noson Gestetner to explain how teshuva is possible if it's really true that our aveiros push us twice as far away from Hashem as we actually go due to the fact that Hashem is "moving" in the opposite direction as we are. He answers this question with the following Gemara:

The Gemara in Yuma 66a says "רבי לוי גדולה תשובה שמגעת עד כסא הכבוד שנא' (הושע יד) שובה ישראל עד ה' אלהיך." Teshuva is so great that it reaches all the way to the Throne of Glory. Rav Gestetner explained that even though when we abandon Hashem we are moving in the opposite direction Hashem is, teshuva has the power to draw Hashem, so to speak, back to us. He uses this pshat to explain the pasuk in Devarim 30:3, "וְשָׁב יְהוָה אֱלֹהֶיךָ אֶת-שְׁבוּתְךָ." The pasuk literally means that "Hashem your G-d will bring back those of you who are returning." But according to this alternate pshat, it would mean that Hashem will return "your returning." Meaning that Hashem will take the "returning" that we should have done, and He will do that "teshuva" for us by returning to us.

But this pshat still imagines the space that we create between ourselves and Hashem as one linear distance in one dimension. I was thinking of another pshat, based on a somewhat different reading of the Gemara in Yuma 66a about teshuva reaching the Kisei Hakavod.

Check out the video below, originally posted by Crawling Axe, to get an idea of where my thoughts are going with this:
Physics imagines the physical dimensions as lines from one dimension leading to another dimension. If one folds the points on one dimension together, he can pass from a point on one dimensional plane to a point on another dimensional plane instantaneously. For instance, if you imagine all places that exist at one time as a flat plane, you can also imagine folding that plane so that very "distant" points are touching, you can imagine how it could be possible to traverse such a large distance in just a moment by going over the folded point and skipping all of the space on the plane in between.

Reish Lakish in the Yerushalmi introduced the concept of looking at spiritual distance as if it were a physical distance. So extending that analogy, if there were a way to make a fold in the physical distance separating us from Hashem, we could get straight back to Hashem while skipping over the whole "distance" that separates us. That is what teshuva does. "teshuva reaches [over] to the Kisei Hakavod" could mean that teshuva creates a miraculous fold in the plane of space that separates us from Hashem and allows us to "skip" back to Hashem over the fold.

Picture courtesy of toasted spiral. Click here to get Dixie Yid in your e-mail Inbox or here to subscribe in Google Reader.
Posted by DixieYid (يهودي جنوبي) at 8:41 AM

Physical analogies are nice, even inspiring, but how can anyone demonstrate that our reality with respect to teshuva is described by this model? Also, we're told by HaShem that teshuva works, which should be 100% persuasive. What purpose does an attempted physical model serve?

In the true Jewish tradition of answering a question with a question, I'll ask you two questions:

What was the purpose of Reish Lakish's physical analogy for understanding the affects of azivas HaTorah?

What was the purpose of the L'horos Nosson's physical analagoy for how teshuva bridges that distance?

To give an understandable idea of the concept.

But going too far into physical analogies, complete with graphs and equations, overdoes this (and creates new intricacies that are hard to understand!)

Exactly. The question is where the line should be drawn between analogies that add to one's understanding and ones which gratuitously convolute the issues.

Here, the ability to understand how the distance between one's self and someone very far away can be bridged (such that the person is only one step away) is the "value added" aspect of the worm hole mashal.

This can also be thought as the removal of barriers, as opposed to the reduction of distance.

Absolutely true. There are many angles to the inyan of teshuva.

But I was going with the distance/reduction-thereof mashal along the lines of Reish Lakish & the L'horos Nosson ala Rav Weinberger.

We always feel the distance in varying degrees, yet we know HaShem is everywhere! This is a paradox.