Funds Needed to Restore the Kever of Devorah Hanevia 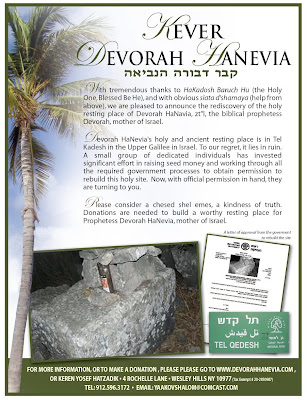 I received the following e-mail from Nava. Any help on this project would be a big mitzva!

Please make a donation to assist in the renovations of the kever. The reward for helping to renovate this kever is immeasurable.
For further information please see DevorahHanevia.com.

May HaShem reward your efforts in Olam Haba, amen.

Click here to get Dixie Yid in your e-mail Inbox.
Posted by DixieYid (يهودي جنوبي) at 4:03 PM

Email ThisBlogThis!Share to TwitterShare to FacebookShare to Pinterest
Labels: Tzedaka

How do they know this is the Kever?

Rabbi Menachem Perez HaChevroni, zs'l:
"I went to to Tel Kadesh in the Galil and I saw Kever Devorah HaNevia, and she is buried in the Galil"

רבי יצחק חילו, ה"א צ"ג Rabbi Yitzchak Chilo, zs'l:
"Kadesh is Kadesh Naftali as is written in the book of Judges 4. Very few Jews lived there, only to upkeep the graves of the Jews and welcome guest coming to pray. In the graves are buried Barak ben Avinoam and his wife, Devorah HaNevia"

Sefer, Igeret Yechus Avos:
"The city of Kadesh is Kadesh Naftali, the burial ground of Barak ben Avinoam and his wife, Devorah HaNevia"

Sefer, Igrat Yachasuta:
"Kadesh is the location of the Bet Midrash of Yehoshua bin Nun and nearby, are Devorah and Barak ben Avinom"

Rav Moshe Yerushalmi, zs'l:
"In Kadesh, underneath the village are buried Devorah and Barak ben Avinoam and a large stone is placed on them"

Shavchei Yerushalayim:
"Kadesh is where Devorah and Barak are, and on top of them are large stones".

Tov Yerushalayim:
"Kadesh, in Arabic, Kadis, near לניאס, are the graves of Barak ben Avinoam and Devorah HaNevia... and on top them are etched large caves".

Near the wellspring and the antique synagogue, which was called "Midrash Yehoshua bin Nun", the Jewish mausoleum (structure of upper burials) (in the Gemara, it is referred to as "Nefesh") where Devorah HaNevia, Barak ben Avinoam, and Yael, a'h, were buried in alcove graves, was intact.

According to drawings we have from the 1900's, it is possible to reconstruct the mausoleum and save the Tzaddikim's graves that are buried there in disgrace.