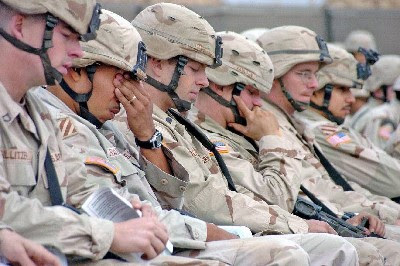 Guest Posting by a Ben Noach from Fort Carson, CO:

I grew up as a Christian in a relatively religious home. I was always involved with a pretty big church that my family went to. I would say that it was a very important part of my early life, up until I went to college. When I was in college I got really involved with a group called Campus Crusade, which tries to convert people to Christianity and bring non-religious christians, college kids, back into the church.

I thank Hashem to this day that I never heard of or, myself, tried to convert a Jew to Christianity, but that was not intentional. If you had asked me, back then, if I thought Jews should convert, I would have said, "Absolutely." Either way, one day I was walking through the library at my school looking for a book about Calvinistic Christian theology, because a friend of mine was very into theology at the time, and I came across the library's section of Jewish titles. As a spur of the moment sort of thing, I figured that since Christianity claimed to be descended from Judaism, it would be interesting to see what Jews had to say.

Before this I knew next to nothing about Judaism. So I picked up a small book that was called "Jewish Spirituality: A Brief Introduction for Christians." I ended up reading through the Jewish book and I barely touched the theology book that I had gotten. I can't remember exactly what that first book I read covered, but it struck a chord with me. I realized that I had never really read the first five books of the bible, since every christian considers them old and done away with. I decided to start reading through them from beginning to end time and time again in order to try and get a sense of what the Torah was saying.

At the same time I had begun working on praying and with out my knowing it at the time, was basically doing hisbodedus. So I started reading the Torah, which at that time I still refered to as the "Old Testament," and I fell in love with it to the point that many of my Christian friends would lecture me about the need to study the new testament since the old was not relevant anymore. After a little while, I came to the conclusion that Christianity was very far from were it originally started and that it was necessary to get back to the roots of Christianity.

I basically got the point where I was reading more and more Jewish sources and doing away with Christian ones. At first I figured that the Talmud and Oral Torah were completely false and so I did not delve into that area of Judaism. Then slowly I began to see the beauty in the Oral Torah and fell inlove with the Talmud. During this time I was basically continually whittling away Christian doctrine that I saw had no foundation in Judaism or in the Torah, but I held firmly unto my core Christian beliefs.

I was aware that there were Jewish sources which refuted Chrsitianity but I ignored them because I figured that given enough time I would know enough to be able to refute the anti-missionaries and prove the truth of Christianity from Jewish sources. I was still very stubborn in the correctness of my Christian beliefs, even though I was doing away with everything else in the religion because it seemed ridiculous since it didn't match up with Jewish sources.

I was very serious about the entire thing. to the point that people were petitioning me to write acommentary on the new testament according to Jewish sources. Either way, as I committed myself more andmore the Torah and Talmud and the entire cornicupia of Jewish source, I figured that I would try and face what the anti-missionary groups were saying in refutationof christianity. Since by this time I already had a small amount of knowledge about most areas of Jewish life but I had a hard time refuting what the anti-missionary groups were saying. I struggled with it for alittle while until I realized that if I were going to continue in my path of Judaizing Christianity and stubbornly holding onto Christian beliefs in the face of all evidence to the contrary, I would basically be creating my own religion. Instead of following a path to Hashem, I would be creating my ownpath to a god that I had created on my own.

Thus I came to the conclusion that to be a member of any one religion, a person must take part in that religin's lifestyle according to the traditions established in the religion and not just believe and do whatever he wants. Thus, I came to the conclusion that since I trusted the Jewish tradition in everything else, it was ridiculous not the trust it in relation to the Moshiach as well. And the more I delve into it, the more I realize just how diametrically oppossed Christianity and Judaism are to one another and that I did not find Christianity to hold any amount of truth or validity.

Was it hard to leave behind Christianity? Yes, a little. But honestly I had already fallen so in love with everything Jewish that it was like stepping from one room into the next. The hardest part was losing all of the friends that I had whose entire life, as mine used to be, was oriented towards bringing people into Christianity. It was easier in part for my as well because I have a great relationship with my family and they were convinced, along with me of the ridiculousness of christianity and all christian beliefs and they became Bnei Noach too.

It wasn't until I left behind any vestige of Christian belief and study the matter from a Bnei Noach perspective that I realized that there was such prohibition of non-jews study parts of the Torah. Thus, after I left behind Christianity I discontinued my study of those parts of the Torah that I should not have been studying. To be honest, that is one of the greatest struggles that I have had in the whole change from being a Christian to being a Ben Noach with the hope of becoming Jewish.

I have a great longing to delve into the Gemara which, from the first moment I really started delving into it, I saw as the core of all things Jewish. I really look forward to the days after my eventual conversion that I can just sit and study the Gemara, the Rishonim, and the great works of Halachah.

Because of the way that I came to Judaism, albiet impure in it's beginnings, I have sort of been stuck in a life in-between. Though I now live a life in accordance with Sheva Mitzvos Bnei Noach, I had previously lived a full Jewish lifestyle al pi halachah and thus the transition for me from a Ben Noach to a Ger will, bezras Hashem, not be as difficult as for some others since many facets of daily Jewish life I am already acquainted with. That being said, the fact that I still have 2 and 1/2 years in the military before I can even beginning to take part in the Geirus process leaves me plenty of time to works on my avodas Hashem and those areas of musar and such that are applicable to Bnei Noach.

Wow! Keep up the good work!

Bravo and best of luck to you.

From one beni Noach to another--
I appreciate your essay and your journey out of Christianity back to its Jewish/Hebraic roots. It is a long loney journey, but worth every moment. My journey began back in 1996 when I was going through a personal spiritual crisis. HaShem also directed me toward a book intitled Israel and Humanity by Elijah Benamozegh and placed a deep desire in me to read and study the Torah (then I referred to it as the 'old testament'). Shaking off the kelipah of christianity takes time as HaShem opens our eyes to his truth and grand design. As our Jewish brothers/sisters step up to the plate to be The Light Unto the Nations, and the nations begin to understand and appreciate their role and responsibility to HaShem's chosen people, and not feel threatened, or less valued by HaShem, we can truely work together and prepare the way for Moshiach's arrival. May HaShem bless you and safeguard you in your service to Him and our country.

what parts are nonjews supposed to not learn?

Any part of the Oral Torah that is not practically applicalbe to non-Jews.

I'm happy you're happy, but you sound so evangelical. Many Christians study Jewish texts in order to get a better understanding of the roots of their faith, so it is unfair to dismiss all of them as reguarding 'Old Testement' texts as irrelevant.

A valuable post on "Guest Posting - From Campus Crusader to Ben Noach".If you are looking for non profit fund raising tap into an established, successful, and proven Fundraising Program that works @ http://debtfreeliving.supportnonprofits.com

Some heavy stuff here. But you certainly took the time to put it all out there, I bet it was a lot of work!