Sudilkover Rebbe on: Why be Jewish Without a Divine Torah? 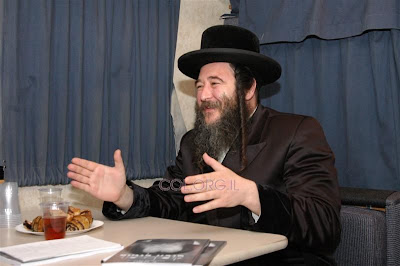 I spoke with the Sudilkove Rebbe again earlier this week, who I meet through A Simple Jew's introduction. We spoke about several things but I wanted to share one interesting story he told first, since I think it's a great and novel approach to those who say they do not believe in Torah Min HaShamayim.

The Sudilkover Rebbe told him that this was fine and that he had no problems with him. They could be very good friends. The man was shocked. "What do you mean? It's fine with you?!"

The Rebbe responded that "It was no problem. The Rambam says that there are 13 Fundamentals of Jewish Emunah. If you deny 12 of them, you're called an Apikores, but you're still Jewish. But he says that if you deny the fact that the Torah is from Hashem, it is a sign that "lo amdu raglei avosav b'ma'amad har sinai," that "[your] fathers feet never stood at the foot of Har Sinai." According to the Rambam, you must not be Jewish. Perhaps you were switched with another baby at birth, or there was an intermarriage that was forgotten on your mother's side. I don't know exactly what happened, but I know that the Ramam says that you are not Jewish. And if a non-Jew doesn't believe in Torah Min Hashamayim, it's nisht gefeirlach, it's not so bad. So I have no problem with you!"

The man got very angry and asked the Rebbe how could possibly say that he's not Jewish?!

The Rebbe calmly responded. "I don't know what you're so upset about. It is not me who is saying that you are not Jewish. It is you who said that you do not believe that the Torah is from Hashem."

Hopefully, the man had something to think about in terms of what being Jewish actually means without the Torah and its mission for us.

Reading this story made me recall the teaching in Chapter 18 of Tanya that states, "Therefore, as a rule, even the most worthless of the worthless and the sinners among Israel sacrifice their lives for the sanctity of G‑d’s Name and suffer harsh torture rather than deny G‑d’s unity, even if they be boors and illiterates who are ignorant of G‑d’s greatness. Even the little knowledge that they do possess is not what motivates them, for they do not delve into it at all; so that by no means does their self-sacrifice result from any knowledge or contemplation of G‑d. Rather, they are prepared to sacrifice their lives without any knowledge or reflection, but as though it were absolutely impossible to renounce the one G‑d, without any reason or rational argument whatsoever. This is so because the one G‑d illuminates and animates the entire soul, through being clothed in its faculty of Chochmah, which is beyond any graspable knowledge or intelligence."

True, and as Izbitz and I were talking about, telling someone they're not Jewish goes to the root of who they are and threatens to take that away. I think that was the Rebbe's goal. To help that person reconnect with the inner truth that being Jewish is what life is all about, and that without the Torah, that can have no true, inherent meaning.

Secular jews have been batting around answers to this one forever. They would tell you Judaism is an ethnic identity and not a religion. Wouldn't you agree that it is? After all, af al pi she'chata yisrael hu.

There is a similar story about person coming to Rebbe Nachman of Breslov and complaining that he was completely worthless. Rebbe Nachman replied and told the man that indeed he was correct.

Shocked, the man began recounting all his good points. This was exactly what Rebbe Nachman was trying to get him to do in the first place. He knew that with this particular person he needed to use a bitter medicine for the person to respond.

No, I wouldn't agree. Just because the result is the same (you're still Jewish even if you sin or are a kofer), the reason is not the same. In other words, all "Af al pi she'chatah, Yisroel hu," states the conclusion that a sinner is Jewish, that phrase doesn't state the reason why. And the "secualar Jew"'s purported reason (that Judaism is an ethnic culture, not a religion), is not the reason why he's still Jewish. It's because inherently, he has within him a neshoma, a chelek Elokah, mi'ma'al. And that is essentially who he is and it will not rest until he/it connects to his/its source, Hashem, by learning and doing mitzvos.

ASJ, so true. I think that was exactly what he was doing with this man. And you see it worked! I only hope that after that encounter, he continued questioning himself about what it is that makes him Jewish, if not Toras Hashem.

I happen to agree that it is because of the neshoma, but I'm not sure a rationalist (I am not aware of this topic being discussed in More Nevuchim, but one could check) would take that approach. In any event, the kashe is not a home run. It only works because we accept that there is an idea of neshoma and that the definition of Judaism depends on kabbalas haTorah. Arvach areiv tzarich. If you asked the same question to a secular jew who has thought through the issue more (e.g. what if you asked Sherwin Wine or Michael Lerner?) he would be less at loss for an answer. In fact, I am willing to bet that a secular jew who has thought the issue through would just spit back that a definition of judaism which dienfranchises so many people who identify in some way with the jewish people despite not believing in the idea of TUM is proof itself that the definition is flawed.
Again, I am not saying I take these positions, but I think before making an argument like the one you present we need to thing about it from the other person's perspective and see whether it is really a home run or not. In this case, luck had it that the person was not too bright and had not retort. It won't work in all cases.

Great question. I've thought about that and it's hard for me to think of a situation where a tinok shenishba would cease to be one. I've seen the halacha that if one who's a tinok shenishba hears someone tell him he has to keep the mitzvos, that doesn't change his status. The svora, I think, is that he is trained from his background not to take such a message seriously, so the mere knowledge of a halacha wouldn't change his lack of culpability for his sins. It's hard to think of a situation today, where the secular influence is so strong, where almost anything a tinok shenishba experiences with frum Yidden/Torah would change his status.

But aside from that Rambam, I'm not speaking from knowledge. Is anyting written about this?

It's not luck. When a tzadik is speaking with someone in person (or even if you were I were speaking to him) he gets a sense of what's going to work.

Also, it's a misnomer to think that a more educated/thoughtful irreligious Jew like Michael Lerner, would be unconvinced because he has some other made-up definition of being Jewish. The thoughtfulness is more of a source of more inventive rationalization than it is a source for any "more viable" alternative definition.

Perhaps I shouldn't ask, but I will... You would tell Michael Lerner he has an elaborate rationalization, he would tell you he has the truth and there is no proof to your belief. Is there something in the Sudilkover's argument I am missing that would prove the Lerner answer wrong and his right?

(Again, don't get me wrong - I know you are right, but I simply question whether the line the Sudilkover took would convince a more sophisticated respondant. I think you will end up each pointing at each other saying the other one is inventing rationalizations for his side).

In discussing moridin v'lo ma'alin the Chazon Ish says anyone born when hashgachas Hashem is not overt and apparent cannot be considered a heretic, i.e. he/she is a tinok shenishba. Very broad definition. I think you will find other narrower definitions if you look in tshuvah seforim re: mechalel shabbos and with respect to a non-religious jew touching wine.

I thought you were going to clarify with the Rebbe regarding his actions and shitos on New Year's and ask him about that ger issue.

As far as this one goes, if a non-Jew does not believe Torah is from Shamayim, he cannor get olam habah even if he keeps the 7 Mitzvos, according to the Rambam in Hilchos Melachim.

One clarification, since two people asked about it. The Rebbe's point was not to say that Goyim don't have to believe in Torah min Hashamayim. We weren't discussing the Rambam which says that the goy must be keeping the sheva mitzvos bnei noach because they were commanded to Moshe at Sinai. That wasn't the discussion & it's a side point. Of course they also should believe that. But he was talking to a Jew, and it's certainly much more of a tragedy when a Jew doesn't believe in Torah min Hashamayim. That was his only point about that.

"Is there something in the Sudilkover's argument I am missing that would prove the Lerner answer wrong and his right? "

Yes, the Rambam. The fact that a certain person is not convinced is not a valid gauge of an arguments effectiveness.

An "ethnic" definition of Judaism, or Jewishness, does not hold up. Converts have always been a part of Jewish life...you simply cannot convert to an ethnicity. Furthermore it is quite possible that in ancient times Yisrael and l'havdil elef havdalos Amalek shared closer genetic relation than some of the various Jewish communities today.

The Torah is and always has been what makes a Jew a Jew. A Jew is a member of the covenant. The Rebbe's "argument" was based on Torah sources...regardless of whether others accept it.