How do we Understand Others' Evil Acts Towards Us as the Hand of Hashem? 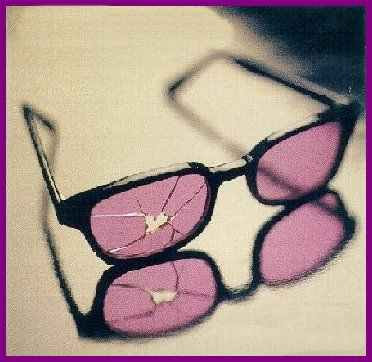 Here's a question Army of Achdus posed to me and my non-authoritative thoughts on the matter:

I've been trying to work through an inyan in Emunah and wonder if you can shed light.

I was trying to explain the inyan of Shimi Ben Geirah insulting Dovid HaMelech, and Dovid's reply that H" told him to curse me to someone. I saw this explained in various places, such as Bilvavi Mishkan Evnah and Tanya. I was trying to explain how the Tanya says that if a 3rd Person does something to us, that not only was the action ordained in Shamayim, but that H" even gave the thought to the 3rd P to do the ma'aseh etc...

So then this person gave me the following Kasha - but what if someone does something repeatedly to us? What about a parent that verbally abuses a child etc.. over and over again? Do we say to the child that H" ordained that you receive this verbal abuse, and that you just need to look at your parent as the stick in H"s hand? I didn't know how to answer. Then came the question - so why throughout Tehillim does Dovid HaMelech pray for the downfall and retribution of his enemies? If it's all ordained min HaShamayim, and Kol Mah D'Avid Rachmanah, L'Tov Avid, then we should gladly accept what our enemies do as for our own benefit.

My answer was that "I guess" that it's true, that H" in the case of the parent mentioned, or even with an enemy, l'havdil, is doing this for our own benefit, but that if there's a way within the dalet amos of halachah to deal with the offense, then that would be ratzon H" as well - the defense would then be Razon H".

My answer is chaser - and I'm trying to work through it to help another yid.

As the Rambam writes in hilchos Teshuva (and as I wrote about previously), this is impossible for the human mind to comprehend. So on some level, we have to let go of the expectation that we're going to fully understand.

Another distinction that I think is lacking in the question is the distinction between how one views past suffering versus how he should view future suffering. We know that past suffering was decreed by hashgacha pratis because it already happened. But we have no idea if the suffering we may or may not encounter later today or tomorrow is decreed by divine providence. And so I would think that it would be ratzon Hashem, as you said, to daven or take whatever steps necessary to stop it from happening in the future.

Yes, as difficult as it is, you have to look at someone else's actions against you in the past as the stick in the hand of Hashem. But just because it happened 10 or 20or more times in the past doesn't mean that it is decreed to happen again. And I think that when the Tanya says that it is as if Hashem put the thought into the other person's mind to do that to you, he is only saying that this is true from your perspective. But from that person's perspective, he has total bechira, is committing a big aveira and will be punished.

All we can do is switch back and forth between the two outlooks when it is appropriate to do so. May Hashem help us have the wisdom to know which perspective to use at which time

Click here to get Dixie Yid in your e-mail Inbox or here to subscribe in Google Reader.
Posted by DixieYid (يهودي جنوبي) at 10:36 AM

To lighten the mood, the question of bechira vs. hashgacha protis can be illustrated not only by a negative story (traditionally, Egyptians’ choice to enslave Jews vs. the latter being destined to be enslaved), but by a positive one as well.

There was a tzaddik, who had absolute emunah in Hashem regarding everything he did in his life. Every morning, after coming home from shull, he would sit at his table and ask Hashem for breakfast. His servant, who was ready for this, would bring breakfast into the room on a tray.

One day the servant thought: “This is ridiculous. He asks Hashem for the breakfast, but what does Hashem have to do with this? I bring him breakfast — not Hashem.”

So, that day, the servant decided not to make breakfast (or at least not to serve it). His master as usually came in, sat down and asked Hashem for breakfast. The servant just stood motionless in the kitchen.

At that moment, there was a knock on the door. The servant went to open it. Outside the door was standing a man with a tray — “A breakfast that my master sent for the Rabbi.”

Obviously, this blew the servant’s mind away.

What happened was, earlier that morning, the rabbi was walking to a shull and met a rich puretz, whose wife was ill. The rabbi promised to daven for the puretz’s wife. The guy was so grateful that he decided to do something for the rabbi — and started from sending a delicious breakfast to him.

I think what you wrote makes perfect sense. What has happened is Hashgacha Pratis, but since at the time the people involved had free will then they should be rewarded accordingly.

I learned somewhere else that G-d supplies us all with the tools we need to serve Him..even suffering has its purpose to either teach us or lead us or cleanse us...So in the example of the abusive parent, the past would be Hashgach Pratis but not necessarily would the child have to endure future abuse..perhaps it is his mission to overcome the abusive parent or to pray for deliverance. With the Barren Women mentioned in Tanach we find that it says that G-d desires their prayers. Of course we do not really understand the reasons and we can only speculate as this information belongs to G-d alone. All we can do is the best we can with the tools we are given. "If a man comes to kill you..you must rise and kill him first" It does not say to let yourself be killed! As long as you have a choice and a chance you should do whatever you can to be safe and healthy in order to be able to fulfill your mission of serving G-d. Whether you succeed or not is G-d's department.