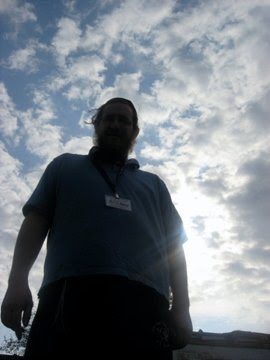 As I referenced two days ago, my friend Rabbi Reuven Boshnack, in his role as rabbi at Brooklyn College, accompanied a bunch of Hillel members down to New Oreleans to paint someone's house that was damaged by Hurricane Katrina. He taught Torah every day of the trip. He has been mezakeh us by sharing some of what he spoke about each day of the trip, even on Shabbos. Awesome!

We understand, that the paint here, waiting to be scraped, has been waiting since the creation of the world for us to come and scrape it. You see there are sparks of holiness, little points of destiny waiting for us, all the way down here in New Orleans.

So while we are scraping while monotony sets in, let’s focus on the message that paint scraping holds for us. There are layers that need to be scraped away, thoughts, feelings and actions that prevent us from being real. They keep us with connecting with others, they keep us from connecting with Hashem, and they keep us from connetction with ourselves. They need to be scraped away, to reveal the pure Neshama beneath.

1/6
Before Priming the walls

Now that the paint has been scraped, and our walls have been removed, we can begin again. The first step is what are the yesodos, the foundations of our lives, what are the fundaments, of emunah and yesodei hatorah that we live by? As you apply the primer keep this in mind, before we can actually paint, to interact with the world, we must understand our inner priorities first. As you put on the primer, think and try to formulate your yesodos.

1/8
Before we started painting

We’re now about to paint. R Shlomo Carlebach, in a famous torah, explained how we are all “painted”- with the superficial identification to torah and mitzvos. It’s just a mask. We’re not talking about how you are on the inside, only the way things look. You know, there are schools that won’t let sincere ehrlich jews in, because their third cousins aren’t in kollel in Lakewood. R Shlomo said, that no matter how well you paint,,you always miss a spot.

On the other hand, we should try to paint ourselves in a color which is the same on the outside as it is on the inside. We know that there was a guard outside of Raban gamliel’s Yeshiva, that would not let you in unless you were tocho k’boro- the same on the inside as you were on the outside. The Kotzker rebbe said, “What manner of demon could see the inner workings of a person? Rather, a person who went to the yeshiva for external reasons, would be dissuaded by the guard. A person who was Tocho Kboro, would figure out a way in anway, they’d go through the skylight if they had to.

Let’s try to make our Yiddishkeit real and meaningful, and a color that matches our insides

1/9
Before starting the last day of work

Do you know what it means "Makeh B’patish?" No, it doesn’t mean to hit something with a hammer. The Melacha of Maka B’patish means to put the finishing touches on something. Why is it assur to do the Melacha of Makeh B’patish? On Shabbos we have to see the world as if everything is done, so clearly putting the finishing touches are prohibited. Today, we are racing against the clock, to get in those finishing touches, before Shabbos. That’s what erev Shabbos is all about.
Also we know, that hakol holech achar hachosam, how you end it is the most important thing. Right now we’re trying to seal in all of the the thoughts and feelings and love and friendship and to seal all of our work in with a kiss.

The Sefas Emes says, “In Choshen Mishpat, we have a halacha, If I sell you a field, surrounded by other fields, You need to buy a road from me, but If I give you a field surrounded by other fields, I must give you a road, because if a person is giving, it is assumed that the person is giving with a generous hand. Shabbos is called a matana tova, a good present. How do we get to Shabbos if it is so different than the rest of the week? Hashem gives us a road called Erev Shabbos.”We’re spending Shabbos in a place where people view Shabbos as a collection of don’ts, we need to be mechazek ourselves to show all of them that it is truly a good present.

The alter Rebbe said, that song is the pen of the soul. When you sing a person’s niggun, you touch the depths of the person who composed it. We’re singing a song from the Tzemach Tzedek. He was a person who wrote over 300,000 pages of manuscripts, proficient in every area of the torah. While singing his niggun, we’re trying to touch that great person in the deepest way.

Why do we have to be so careful about singing an old niggun in the way that it was transmitted? The song we are singing is the chernobler hakkafos niggun. The Chernobler Maggid closed his eyes on simchas torah, when he awoke- he brought this niggun down.

When we sing a niggun, we’re trying to connect, through every note and movement, you know, miss a beat, you lose the rhythm. Did you know that R Shloime Twerski, Hornosteipler Rebbe of Denver, used to spend hours, being “me’ayen” into a niggun, if a note or two belonged there?

Ok,,now that our voices are hoarse from singing, let me tell you something. In this week’s Parsha Yaakov says, “Hashem appeared to me in Lud, and said he’ll increase me, and give me Eretz Yisrael. Efraim and Menashe will be like Reuven and Shimon to me, and they’ll have inheritance equal to the shevatim. Then on the way from Padan, Rachel died, and I buried her there.”

Anyway, Rav Saadia Gaon, said Yaakov was saying, Yosef, I never told anyone, but Hashem promised me great things as I was in Lud, but then tradgedy after tragedy happened. Rachel died, you disappeared, and any time I would even think about such a nevuah, it was a source of pain. But now that I see Efraim and Menashe,I know that Hashem, kept his word.

So many times, we think all of the nevuos which we have seen in tanach are so far fetched, they’ll never happen. This quote from Rasag tells us even Yaakov had given up on them, but it teaches us never to give up on Hashem’s promises to us.
These gatherings are sometimes called Sheves Achim, where jews get together, to sing together and encourage each other. It’s a great thing to do. We should continue sitting together and singing, until moshaich comes and teaches us a new song, vsham nashir shir chadash, bivinyan bayis Hamikdash hageula Hashelama vemisis…

In just a few hours, we’re going home, and facebook will become plastered with the pictures of our trip. Now, I’m not an antitechnology crusader, but I want to warn you about the dangers of digital media.

Let’s try something. Can you close your eyes and picture your favorite memory from the trip. Take a minute. What did it feel like? Was there wind blowing? Was it warm or cool? What did it smell like? Look at the details. You’ll notice that you can “zoom in” on certain details, or remove some noise or obstruction.

When we rely on our pictures for our memories, we confine them only to what was in the viewfinder of the camera, and only that millisecond, not before or after. If it’s a video, whatever happened outside that viewfinder or duration of the clip.
If we do it the other way- you get everything, and you never need a picture to revisit your memories. You can do this exercise all the time.

We see two different types of writing in the Torah, the writing of a Torah, ink on parchment, and the writing of the luchos habris- on the tablets. The difference of course, is that the writing is something separate from the parchment in the Sefer Torah, but in the case of the Luchos, it is the Luchos. Our experiences can be like letters written on the parchments of our lives, or they could become apart of them. The choice is yours.

There is the story of the Volper Rav, one of the students of the Maggid of Mezrich due to setbacks in his life, ultimately became an alcoholic and wandered around. Once, in an inn, a certain Chasid heard someone reciting secrets of Torah. But he couldn’t see where they were. A careful search revealed that they were coming from a poor man, drunk and hiding under the furnace. He realized that this must be the Volper Rav. The chassid located the Volper Rav’s room, and began to search his possessions, for a manuscript of the Maggid’s Torahs. The Rav returned to the room, and asked this man what he was doing. The Chassid, embarrassed, said, “Iwas looking for a manuscript of the Maggid’s torah.” The Rav said, “What’s wrong with you, when I was at the Maggid, he, the students and the Torah were all, one. So, who needs a manuscript?”
The way we deal with and revisit our memories, will allow us to make them a greater part of us.

I love the house painting analogy. When i painted my house (with my husband), i noticed that it was nothing like the decorating shows. it wasn't fast. it wasn't "clean"...it was hard work. My husband and i made a perfect team - he was good at the corners, and "Cutting". I was better at rolling. So together we got the job done. He focused on the small details, and i focused on the "bigger picture". :)

Good Shabbos to you DixieYid!

DuPaint provides new homes with a superior quality painting job that will make you excited to move into your brand-new home.

I once was used a paint sprayer for my door. It went well but it took lots of work. After that, I would just hire professional Boston painters thru Waltham painting company to do interior painting in my house. They know better and less hassle for me as well.