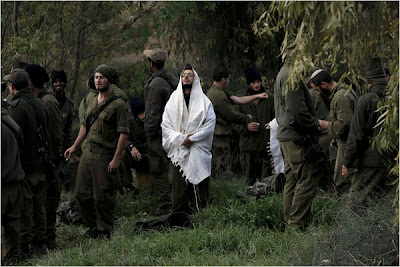 A good project, courtesy of zchusavos:

As the members of the Israel Defense Forces (IDF) battle Hamas terrorists and Palestinian militants in Gaza, leading international Torah scholars have launched a worldwide effort aimed at providing them with spiritual support.

"Operation Tefillah, Torah & Troops," which was launched by Rabbi Simcha HaCohen Kook, the Chief Rabbi of Rehovot, Israel, and the Bostoner Rebbe (Rabbi Levi Yitzchak Horowitz) of Har Nof, Israel, partners people from around the world with soldiers in the IDF. Each person who takes part in "Operation Tefillah, Torah & Troops" is paired with an Israeli soldier, and is responsible to say tefillot (prayers), learn Torah, and do special acts of chesed (kindness) on behalf of that solider.

Rabbi Kook and the Bostoner Rebbe noted that this concept is one that has been a part of the Jewish people for thousands of years. When Moshe Rabbeinu (Moses) led the Jewish people to war with the nation of Midyon, for every person who went to battle, there was a designated person who was responsible for praying and learning for him. Throughout his reign, David HaMelech (King David) utilized this practice as well. During the war in Lebanon in the summer of 2006, more than 50,000 people worldwide participated in this initiative spearheaded by Rabbi Kook and the Bostoner Rebbe, and facilitated in North America by the National Council of Young Israel.

To participate in "Operation Tefillah, Torah & Troops" and receive the name of an Israeli soldier who needs your prayers, send an e-mail to the office of Rabbi Kook HERE. To request the name of a soldier by phone or fax, call the National Council of Young Israel at 212-929-1525 x100, or send a fax to 212-727-9526. Members of the IDF who wish to have a "partner" praying for them are urged to e-mail the office of Rabbi Kook as well.

Rabbi Pesach Lerner, the Executive Vice President of the National Council of Young Israel, noted that every tefillah that is said on behalf of a soldier will make a difference, regardless of where a person may be in religious observance.

"Each soldier that is putting his or her life on the line to defend the land of Israel and safeguard the Jewish nation deserves to have someone praying for their well being and safe return," said Rabbi Lerner, "During my conversations with Rabbi Kook, he emphasized that every Jew is encouraged to participate in this critical endeavor and to pray for a soldier in a manner in which they feel comfortable, irrespective of their religious background."

(Picture courtesy of New York Times, forwarded to me by my wife - thanks!)

Click here to get Dixie Yid in your e-mail Inbox or here to subscribe in Google Reader.
Posted by DixieYid (يهودي جنوبي) at 4:59 AM

Isn't that an amazing photo?

Yeah, I love the contrast too. Really powerful. All thanks to Mrs. Yid for forwarding that picture to me!