Who is the Rav Moshe Weinberger of Israel??? 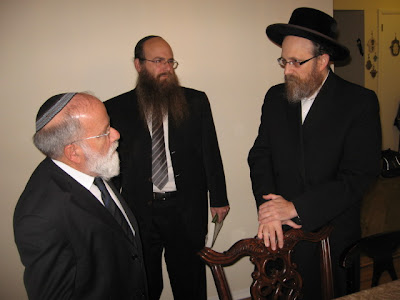 I wrote last week about Rav Zvi Leshem and Rav Yair Dreifuss' visit to the United States. They are working on a project to publish the writings of Rav Shimon Gershon Rosenberg, Rav "Shagar." Baruch Hashem, they were able to meet Rav Moshe Weinberger on that occassion.

I, like most Americans, had never heard of Rav Shagar, zt"l, before they "introduced" him to me. It is unfortunate that the world outside of Eretz Yisroel is only learning about him after his petira in 2007. My impression is that the unique thing that he brought to the world is that he has done more than anyone else in this generation to bring the light of Chassidus into the Dati Leumi and "modern orthodox" communities in Israel. As Rav Shagar was quickly losing his short battle with Pancreatic Cancer, he put the thousands of computer files of his detailed notes on every aspect of Torah onto a memory key. He came to Rav Dreifuss with the memory key, and handed it to him with instructions to put those files on his computer and find a way to publish them, since he would not longer have the opportunity to do it in his own lifetime.

Apparantly, most of the Dati Leumi Yeshivos, notwithstanding their study of Rav Kook's seforim, are basically Litvish in nature, and the "modern" communities in Israel suffer many of the same problems spiritually that we have here in America. This revolution of the light of Chassidus within the Dati Leumi communities is a relatively new thing, and hopefully it will continue to grow and re-invigorate those segments of Am Yisroel in Eretz Yisroel.

Rav Moshe Weinberger has a similar raison d'etre in being a Rav in Woodmere, NY, in the Five Towns. For an explanation of his goals in becoming the Rav of Cong. Aish Kodesh in Woodmere, NY, see his article from Jewish Action Magazine from 9 years ago. For much of the American modern orthodox community, Yiddishkeit is basically just a checklist of obligations that we check off so that we don't feel guilty. It is mostly an outside set of behaviors, rather than an effort at forging a relationship with Avinu Shebashamayim, our Father in shamayim. Rav Weinberger's goal is to bring the fire of Chassidus to the frigid hearts of the American Jewish community.

I don't know definitively who the "Rav Moshe Weinberger" of the Jews of Eretz Yisroel would be, but it seems to me that Rav Dreifuss' efforts as the Rav Shagar's friend and co-Rosh Yeshiva at Siach Yitzchak, to fulfil the last wishes of Rav Shagar, and his tremendous mesirus nefesh in that regard would definitely fit in that category. So I wish them much hatzlacha in their efforts.

To make a tax deductible donation to their project make out a check to "PEF Israel Endowment Fund, Inc." and write "Bikurei Nehosha" in the Memo. Send the check to:

Click here to get Dixie Yid in your e-mail Inbox or here to subscribe in Google Reader.
Posted by DixieYid (يهودي جنوبي) at 11:45 AM

I am not sure that this is a complete characterization of his legacy, which was this and more. See http://www.avakesh.com/2007/06/an_interesting_.html

Also, that nekuda I focused on is based on having had the opportunity to sit with Rav Shagar's friend and Chevrusa, Siach Yitzchak's current Rosh Yeshiva, Rav Dreifuss. Glad to see that there are some in America who were already aware of Rav Shagar!

Do you know if Rav Weinberger is ok with the "non-Jewish" philosophy that is also included in a some of these writings?

Can you be more specific?

I can't say that I know what he says or would say about such things. I haven't heard it discussed. However, I do know that he's learned all of the seforim that have been published from Rav Shagar as of a couple of weeks ago. That much I can say.

Also, what do you mean "included?" Do you mean that non-Jewish philosophy is merely quoted and compared and contrasted? Or is it advocated as a primary source worthy of trust and belief?

Let me get this straight -- you are saying that R' Weinberger has read and approved of even the feminist stuff that R' Shagar has written (aside from his chassidus-oriented stuff)?

(I do not mean to suggest that one should disapprove of Rav Shagar's approach -- I just am surprised from what I know of R' Weinberger that he would be sympathetic to such a derech.)

Let me clarify. I haven't really learned the seforim. I've started but the writing is *very* Israeli, *very* intellectual and *very* difficult for me. So I wasn't able to get very far in it myself and didn't know about the "feminist" stuff. And since I haven't seen it myself, I can't comment on whether or to what extent it can or should be charactarized as "feminist."

Like I said, I haven't spoken about these pratim with Rav Weinberger. I assume that he has learned the things you're talking about, since he's learned all of the seforim that have been put out so far. Although I did not and cannot comment one way or the other about which parts Rav Weinberger agrees or disagrees with.

And to make this point clear, if it isn't already: I am not, nor have I ever been an "official spokesperson" for Rav Weinberger in any fashion. Everyone should understand that any thoughts that I present here as my own are my own, and not his.

I agree with you his Torah's are very high and hard to understand. I can't tell you if the "non-Jewish philosophy is merely quoted and compared and contrasted Or is advocated as a primary source worthy of trust and belief" but it seems either way is not something I would expect Rav Weinberger to be so into. But he always surprises me!

Well now you're the third American I know who was already aware of Rav Shagar before my recent "introduction." There's you, now Chaim B. and Avakesh.

As for whether he's "into" the secular philosophy or the "feminist" aspects of the seforim (which again, I haven't seen so I can't comment on), I just don't know.

Perhaps give him a call and ask!