Was Moshe Right for Questioning G-d? 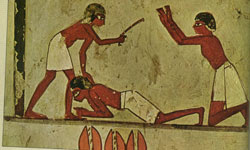 Rav Yair Dreifuss brought up some very interesting questions on something very difficult that Moshe says at the end of Parshas Shmos. After Hashem tells Moshe that He will use him to save the Jewish people and relieve their suffering in Egypt, Moshe speaks to Paroh, but Paroh brings even more suffering on the Jewish people, who let Moshe know how they feel about this! Then Moshe turns to Hashem and asks some very difficult questions:

Ostensibly, Moshe's words sound like heresy. Doesn't he know that everything that Hashem does is good and that it is for a reason, even if we don't know what that reason is? As Rabbi Akiva says, one must always say, "כל דעביד רחמנא לטב עביד," Everything that the Merciful One does, He does for the good." (Brachos 60b).

To explain this, two opinions are brought at the end of the 5th Parsha in Midrash Raba on Shmos. "מהו והצל לא הצלת רבי ישמעאל אומר והצל לא הצלת ודאי רבי עקיבא אומר יודע אני שאתה עתיד להצילם אלא מה איכפת לך באותן הנתונים תחת הבנין באותה שעה בקשה מדת הדין לפגוע במשה וכיון שראה הקדוש ברוך הוא שבשביל ישראל הוא אומר לא פגעה בו מדת הדין." "What [did Moshe] mean by 'And You have not saved Your nation.'? Rabbi Yishmael says: 'You have not saved' literally. Rabbi Akiva says [that Moshe means] 'I know that You will deliver them in the future. But don't you care about those [babies being built into the bricks] under the building[s]?!' At that moment, the Divine attribute of justice wanted to kill Moshe. But since Hakadosh Baruch Hu saw that [Moshe] was speaking for the sake of the Jewish people, the Divine attribute of justice did not kill him."

Rabbi Yishmael basically says that yes, Moshe Rabbeinu spoke heresy. But Rabbi Akiva said that no, even though Moshe had full Emunah in the fact that everthing would be good, but he was still protesting the excessive suffering that he felt the Jewish people were enduring. The Midrash continues that since Moshe was speaking for the sake of the Jewish people, he was "forgiven" for speaking that way.

Rav Dreifuss pointed out that these teachings would seem to indicate that there is something to be said for a type of Emunah where one is engaged enough with Hakadosh Baruch Hu to ask questions when things don't seem to make sense, rather than withdrawing from empathizing with others, lest he come to questions of faith. He points out that this was the way of Rav Levi Yitzchak of Barditchev and others as well. Since these questions by Moshe are for the sake of the Jewish people and come from a place of Emunah, and not for the sake of cynicism, or justifying an irreligious lifestyle, they are accepted by Hashem.

He even says that one with faith who asks questions like Moshe's is a higher level of Emunah than one who passively accepts all suffering by anyone, no matter how bad, with total faith and no questions. I partly understand what he's saying here, but this is also a difficult point to grasp, so if you have thoughts on this, pleae let me/us know.

Lest this post be too long, I'll tell over Rav Zvi Leshem's adendum to this discussion in the words of the Aish Kodesh, Rav Klonymous Kalaman Shapira, in a follow-up post tomorrow.

Click here for Part II: How Sorah Gave Her Life for the Jewish People...