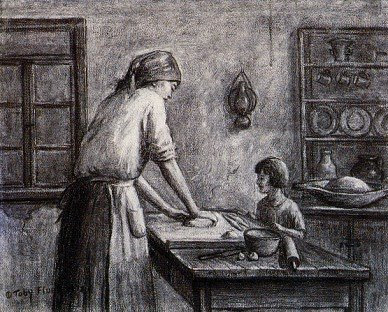 Yesterday, on my post Where do Women "Fit" Into Avodas Hashem Anyway?, Leah Shaindel commented that she was told by the Koidinover Rebbe that a woman can reach very high levels through making Challah, but that she didn't know the explanation. I passed her question on to Rabbi Micha Golshevsky, who I thought might know the answer. Here was his response to the question:

[E]verything depends on what we think. A woman who remembers that she is doing a mitzvah of Chesed when taking care of the house or kids, fulfills the mitzvah of v'ahavtah l'rayacha kamocha. She has many other ways to directly elevate her house.

For example she can focus on fulfiling the mitzvah of chinuch while she spends time with her kids. She should also remember that every instant she is fulfilling the many mitzvos of tznius, being careful how she speaks, etc etc.
(Spirit of the Law, 72:6)

A universal custom among the Jewish people involves baking challah in honor of Shabbos... Even if bread baked by a Jew is available, each household should bake so that the woman of the house can take challah from the dough, etc.

Rav Nosson explains one of the deeper reasons behind lighting candles and taking challah in honor of Shabbos, as well as why the performance of these mitzvos is the woman's perogative.

Rebbe Nachman explained the verse, "Hashem is close to all who call...to Him in truth," in a novel way. No matter where you have fallen, if you will just call to the Creator in truth on your own level, He will surely reveal Himself to you since He is close to any who call in truth. Even if all you can do is say, "please help me," this will also reveal the portals that lead out of spiritual darkness to the illuminationof true connection.

Shabbos candles represent the light of truth that cuts through the deepest darkness and illuminates the path back to holiness, since Shabbos represents the next world which is the ultimate truth. Speaking even one word in truth illuminates the most mundane situation and brings closeness to Hashem, much as Shabbos imbues the mundane with sanctity.

The truth was easily discernible before Adam and Chava ate from the Tree of Knowledge of Good and Evil. When they ate, "the light of the world was extinguished." This means that before they ate, they existed in a more enlightened state and could easily tell the difference between right and wrong. After they ate, evil went from being external and noticeable to internal and difficult to discern.

Their intention when eating was to intensify their challenges so that they could ultimately afford Hashem more pleasure when they toiled to choose good over evil. Their mistake was that they should have done what Hashem said regardless of what they understood to be more beneficial spiritually. Hashem had said not to eat from the fruit; they should not have eaten.

Challah is set aside for a kohein, a direct male descendant of Aharon who is referred to as the "man of truth" in the verse. The kohein is the paradigm of the tzaddik who has more connection to the truth than the average person. By giving him the challah, he demonstrates how we can connect even our bread to the ultimate Source, the absolute truth of all creation.

Forging a connection with a kohein galvanizes a person to redouble his efforts in his quest for truth and holiness.

Nowadays the challah is not given to a kohein, but it is burned. The very fact that we separate a small amount of dough and yearn to give it to a kohein and attain the lofty connection this brings connects us to the higher aspect of striving for truth. It has the required effect as though we had given the challah to a kohein.
Women as a whole were affected by Chava's sin to a great extent. (This is in accordance with the relevant verses as well as Midrashic, Talmudic, and Kabbalistic teachings on them. The subject is a very broad one that will be addressed later on in the series.) The rectification of this is that women work to restore the truth to the world by lighting Shabbos candles and increasing their levels of truth by giving challah. This explains a little of why we separate challah before Shabbos and why women have the especial perogative to fulfill the mitzvah.

May Hashem fill us with the truth and the light of Shabbos!

Picture courtesy of chgs.umn.edu. Click here to get Dixie Yid in your e-mail Inbox or here to subscribe in Google Reader.
Posted by DixieYid (يهودي جنوبي) at 10:45 AM

I don't know what it is, but when i prepare the Challah bread and Candles, the room immediately seems "Holy". I find when I am baking the Challah bread, i am completely immersed in the task, nothing else matters, even if it is a day before Shabbat.

Shorty: Everything about Shabbos relates to our portion in the next world. All these wonderful mitzvos are a weekly pass into Gan Eden and higher. We just need to open the door and walk in with our entire selves. Hashem should help us all truly feel the light of Shabbos!

Just ti illustrate a connection with this topic and this weeks PArsha (or any of the next few weeks) The question is why did Hashem Take the Jews in such a Round about way to Eretz Yisroel? Everyone has there own answer Rashi is most famous saying that Hashem was afraid that we would have to go to war, and the Yidden would run Back to Mitzrayim. The real question is of course we had to go to The desert we had to get the torah at HAr Sinai first? The answer is simpile the MEdrash Socher Tov says That HAr Sinai is hashem took The HAr Hamoria (The Har Habayis)and TOOK CHALLAH FROM IT TO CREATE HAR SINAI. That is we Could have and apparently optimaly should have Gotten the torah in Eretz Yisroel.