The Relative Merits of Criticizing One's Self vs. the Other Guy 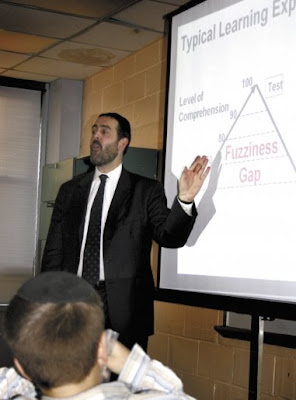 I generally hold that if one is going to be critical of Jewish people, he should criticize the same group that he belongs to in an effort to effectuate change. When people criticize other groups of Jews, it is mainly a salve that lets people feel better about themselves by focusing on others' faults. Such criticisms allow one to distract himself from inner work by focusing on "yenim's problems."

In this vein, Rabbi Harry Maryles answers a question that I've had for a while about his blog. Whether I agree with his answer is another matter, but he certainly has an interesting theory about the future of modern "modern orthodoxy" versus "chareidi orthodoxy."

Emes V'Emunah: The Wave of the Future

Picture courtesy of the Jewish Star. Click here to get Dixie Yid in your e-mail Inbox or here to subscribe in Google Reader.
Posted by DixieYid (يهودي جنوبي) at 11:07 AM

Email ThisBlogThis!Share to TwitterShare to FacebookShare to Pinterest
Labels: Blogging

But Chida (Peisach Eynayim) also answers the question of why the rejected opinions were included in Gemara by saying: “Light is only recognizable when it comes from darkness, and the truth can be discerned in the context of falsehood. Therefore, Hashem told Moishe different interpretations so that from the rejected opinions we would be able to appreciate the correct one.”

just wondering what the pic of Rabbi Goldhar teaching students how to take notes more effectively connects to the post? Was a very interesting article tho- the wave of the future

I don't know R' Goldhar. But if you read R' Maryles article, one of the things he was talking about was "Chareidi" rabbis being the primary rebbeim in "modern orthodox" day schools. This picture is of a relatively "chareidi" looking rabbi teaching to a class that looks more "modern." :-) Too subtle?

This is one of the significant differences between Israel and America. In America you have, "Yeshivish" which is the Ner Israel hashkafah. (Based on my own observations from living in America) Torah is the center of their life, but they also work as doctors, lawyers, accountants, etc... And unlike the true Charedei world, there is no stigma attached to working.

There are many significant differences between Modern Orthodoxy and Yeshivish, but IMHO they are not major differences that would prevent the mainstream of each camp from merging.

Reb Yaakov, I hear what you're saying but I don't think you could call Lakewood style yeshivishkeit out of the mainstream, and there, working as a professional might not be as widely accepted at this point. Would you say the same thing about Flatbush/Lakewood/Monsey style yeshivishkeit?

After reading R' Marlyes article and these comments it occurs to me that I've may not have ever fully understood the term "Yeshivish!" Could someone please advise if its definition has expanded?

After reading R' Marlyes article and these comments it occurs to me that I've may not have ever fully understood the term "Yeshivish!" Could someone please advise if its definition has expanded?

To explain what I meant by the term, "Yeshivish".

In Israel, we have two camps, Dati Leumi (roughly Modern Orthodox) and Charedi. It has been well documented that those American Orthodox who find themselves in between these camps have a difficult aliyah. One of the reasons for this difficulty is because in America there is a significant hashkafic position in between MO and Charedi. I refer to this in-between category as Yeshivish.

For me, one of the main stereotypical differences between Ner Israel and YU, is that YU represents the American liberal university education combined with learning Torah. Ner Israel, represents a commitment to learning Torah, and you can also receive an education that will enable you to have a profession (doctor, lawyer, etc...) There is a lot in common between YU and secular universities, which is not necessarily the case with Ner Israel. BTW - I am a different strokes, for different folks type of guy and each institution has its strengths and weaknesses.

I have also been led to believe that the Charedi society of Lakewood and Monsey feel that having a profession is B'dieved. You certainly should not go to university and the preferred lifestyle is to sit and learn. IMHO this Charedi society is too far from YU to merge with it. But the YU and Ner Israel cultures certainly share a lot of common ground.

I hope this explains the ideas that I was trying to express in my previous comment. I want to reiterate that I think that each of these sub-divisions of Orthodoxy has its strengths and weaknesses, and I look forward to more cooperation between them in the future. Also I am making gross generalizations and using stereotypes - so I apologize in advance if I have offended anyone.

I feel kind of funny for saying this because I hardly represent YU. My affiliations lie elsewhere. Nevertheless, I think that the way you describe Ner Yisroel as "Ner Israel, represents a commitment to learning Torah, and you can also receive an education that will enable you to have a profession" can equally be applied to YU. At least hashkafically speaking. I have a hard time believing that Rav Soloveitchik would agree at all that the objective of YU is to "learn secular studies [implying it is first and primary, and almost as an afterthought, Torah as well.]

For RS, it was always Torah first. It's just that in his circles, Madda can be used out for Torah. Not only for a profession. Lav davka it needs to be a Torah UParnosa model which is what I believe Ner Yisroel and most of the chareidi world holds by.

So, in summary, Torah is first and primary in all frum circles. Now it is another question entirely whether and to what degree the students of YU feel the same way.

And finally, I'm definitely a supporter of Torah UParnosa. I just felt the holy godol btorah Rav Soloveitchik and his mosdos weren't being reprsented fairly.