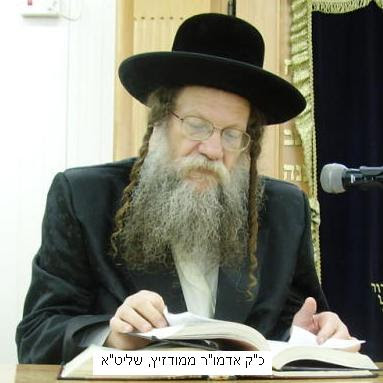 I received the following notice by e-mail from the Modzitzer yahoo e-mail list:

The Modzitzer Rebbe shlita will spend 10 days in the US (Mon. Feb. 23- Wed. Mar. 4), primarily to provide chizuk to Jews after the recent
waves of financial and other crises. The Rebbe's gabbai, Rabbi Zev Krimelovsky, stated that "The Rebbe shlita had countless conversations with his people in the
US the past 6 months. He felt its time to come provide some chizuk, using the
month of Adar as a springboard to raise spirits, instead of just raising money."

The Rebbe has been invited to a series of evenings in different areas
throughout his stay - Flatbush, Monsey, Lawrence/Far Rockaway, Lakewood,
Manhattan and Baltimore Maryland, to name a few. If you are interested
in joining one of these evenings, or to arrange a private meeting with the
Rebbe, write to modzitzer@yahoo.com, or
call one of the phone numbers at the end of this notice.

The seventh Rebbe in a dynasty that started with Rebbe Yechezkel of Kuzmir, he is a rare combination of the best traits one would hope for in a Rebbe. He is well-versed
in the classics of Chassidish seforim, as well as being prominent Talmid Chacham
in the classic Lithuanian tradition.

The Rebbe was a favorite talmid of HaGaon HaRav Shlomo Yosef Kahaneman zt"l, of Ponevezh, who called him "my missile." A student in Ponevezh Yeshiva LeTzeirim and Yeshiva Gedolah, he became a leading talmid of Reb Shmuel Rozovsky, zt"l, as well as HaRav Aharon Leib Steinman shlita and maintains warm kesher with today's Rosh Yeshiva, HaRav Berel Povarsky. This sterling tradition served him well when he served for over 20 years as Rosh Yeshiva of Yeshivas Imrei Shaul in Bnei Brak, until assuming the "Admorus" of Modzitz upon his father's passing.

The unique blend of Negina, Torah, outreach and personal warmth that has typified Modzitz throughout the generations is even stronger today in the Rebbe, which is why he is embraced by the full spectrum of the religious Jewish world. His erudition and incisive analysis, coupled with a warm insight into people's nature and needs, have made him a speaker of choice in many circles, ranging from Ohr HaMeir Yeshiva in Peekskill, Darkei Torah in Far Rockaway, to the Hesder Yeshiva in Beit El, and Kerem BeYavneh in Israel. He was a featured guest speaker at Merkaz HaRav in memory of the Kedoshim HY"D killed a year ago there. In Elul, the Rebbe was invited to Mexico City, and was described by local Rabbonim as "doing more for chizuk in Mexico in 1
week than we have done for 20 years".

Modzitz has experienced extensive growth the past few years, with new Batei Chassidim opening in Modi'in Illit, Ashdod, and Yerushalayim, the renovation of the Yeshiva Ketana and a vast expansion of the main Beis Medrash in Bnei Brak, significant growth in Brooklyn, and the beginnings of new Modzitz kehillos in London, Mexico City, Beit Shemesh and elsewhere. A strong chessed network has also been established, providing assistance to young kollel families and other needy people throughout the year.

For consultations and personal meetings, please call Eli Gelbtuch at 917-940-6416.

Picture courtesy of yeshivaworld. Click here to get Dixie Yid in your e-mail Inbox or here to subscribe in Google Reader.
Posted by DixieYid (يهودي جنوبي) at 10:06 AM

I met the Rebbe Shlito this morning. His analysis of current events & how they are included in the Parsho were amazing! Though I wish I could, I'm sorry I can't make it to Baltimore. If anybody is coming to Brooklyn for Shabbos, come to the Davening & the Tishen.