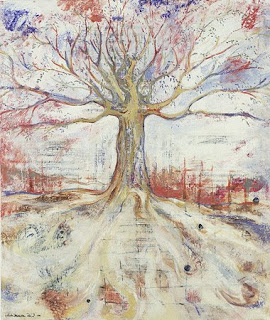 Within our Sacred Scriptures, our people are compared to various trees which are planted in the Land of Israel, and each comparison reveals another aspect of our spiritual raison d’etre within the Land. In this letter, I will begin to discuss with you the comparison of Israel to a grapevine. For example, in a prayer for Israel’s redemption in Psalm 80, King David says to Hashem, the Compassionate and Life-Giving One:

As King David continues his prayer, he describes how the “grapevine” which left Egypt was implanted in the Promised Land:

“You cleared a space before it; it took root and filled the Land” (verse 10).

The Talmud, in the name of Rabbi Huna, states that King David was a prophet (Sotah 48b). We therefore find within this psalm the following prophetic prayer regarding the future tragedies which would befall the flourishing “grapevine”:

“It stretched its branches until the sea, and its tender shoots until the river. Why, then, have You broken down its fences, so that all wayfarers pluck at it? The swine of the woods ravages it, and that which moves in the fields feeds upon it. O God of the hosts of creation, please return; look down from heaven and see, and be mindful of this vine. (Verses 12-15)

A number of years ago, on a Friday morning, Hamas terrorists murdered several students at a yeshiva in the village of Atzmona. That Friday night, I was a guest in the home of Rabbi Shlomo Zalman and Adina Shapira in my neighborhood of Bayit Vegan, Jerusalem, and we were discussing the long-range implications of the tragedy from a Torah perspective. Their children then began to sing a moving melody to the following verse from the above prayer of David on behalf of Israel, the battered grapevine:

“O God of the hosts of creation, please return; look down from heaven and see, and be mindful of this vine. (Verse 15)

My soul was stirred by both the words and the melody, and I resolved that I would begin to explore the deeper meaning of the metaphor of the “grapevine.” As I studied various biblical passages, I discovered other verses which compare our people to the grapevine or vineyard. For example, the Prophet Isaiah states:

“Now the vineyard of Hashem of the hosts of creation is the House of Israel, and the people of Judah are the shoot of his delight” (Isaiah 5:7).

In a commentary on the above statement, the Vilna Gaon explains that when the people of Israel fulfill the mitzvos of the Torah, they become the fruits of Hashem’s vineyard (Aderes Eliyahu).

In another example of the “grapevine” metaphor, the Prophet Ezekiel proclaimed to our people the following Divine message:

“The word of Hashem came to me, saying, ‘Son of Adam, what will become of the vine-tree, from among all trees, the branch which grew among the trees of the forest? Can wood be taken from it for productive use? Could they take from it a peg upon which to hang any vessel?’ ” (Ezekiel 15:1-3).

Based on the teachings of our prophets which describe the spiritual role of Israel among the nations, I would like to suggest the following interpretation of the above passage:

Israel is the “grapevine” that was taken out of Egypt and planted in the Promised Land in order to produce nurturing spiritual fruits for all humankind. The grapevine called Israel, however, began to forget the purpose of its existence, and it wanted to be like all the other trees of the forest – trees which are noted for the strength of their wood. In the metaphor of the Prophet, the trees of the forest are the nation-states of the world who are known for their “wood” – their physical and economic strength. Israel desired to emulate the nation-states of the world and to demonstrate that it too could become an economic and military power. Yet Israel forgot that it is a grapevine whose weak wood serves no constructive purpose. Israel exists only for its “fruits” – its teachings and deeds which are to inspire all humankind.

As Rabbi Samson Raphael Hirsch explains in his commentary on Psalm 80 (8-12), there is another aspect of the grapevine which is relevant to understanding the history of Israel. He writes:

“The fruit of the grapevine is the most crushed and abused among the fruits. But this very abuse serves to ennoble it, and finally he who has pressed it and abused it is overwhelmed by its strength.”

The suffering that Israel endures will ultimately ennoble Israel, and the entire world will experience the great strength of the spiritual “wine” that will result from the pain and abuse that Israel experienced.

Within Jewish tradition, “wine” is a metaphor for Torah. An example is found in the following verse from the Book of Proverbs, where the wisdom of Torah proclaims: “Drink of the wine that I have mixed” (9:5).

Israel, the vineyard of Hashem, is therefore to produce “wine” – Torah – which will bring rejoicing to the world; thus, in the messianic age, when “Torah will go forth from Zion” (Isaiah 2:3), Israel will proclaim to all humankind:

1. On Shabbos, we will read the Torah portion which contains the “Song at the Sea” – the joyous song that we sang after the sea miraculously split and we were saved from the pursuing Egyptians. Within this sacred song to Hashem, we find the following reference to our future entry into the Promised Land:

“You will bring them and plant them on the mountain of Your heritage” (Exodus 15:17).

Our sages say that this is reference to our tribes being planted in the Land, each in its own area, like a vineyard with rows. (Mechilta, B’Shlach 3)

HERE IS a recording of the song mentioned in this post. In this recording, Eliyahu Shapira, age 12 and a half, is singing a nigun (melody) to the following words:

“O God of the hosts of creation, please return; look down from heaven and see, and be mindful of this vine. And of the foundation that Your right hand has planted, and upon the child whom You strengthened for Yourself.” (Psalm 80:15,16)

Update: 3. The suggested interpretation of the metaphor found in Ezekiel 15:1-3 was partly inspired by the commentary of Rabbi Hirsch on Psalm 80, where he discusses this metaphor from the Book of Ezekiel. Rabbi Hirsch’s comments are found in, “The Hirsch Psalms” – Translation and Commentary by Rabbi Samson Raphael Hirsch, which is published by Feldheim: www.feldheim.com .

It was also partly inspired by the commentary of Rabbi Moshe Eisemann on the Book of Ezekiel. Rabbi Eisemann’s work, “Yechezkel” – Translation and Commentary, is published by Mesorah Publications: www.artscroll.com .

Click here to get Dixie Yid in your e-mail Inbox or here to subscribe in Google Reader.
Posted by DixieYid (يهودي جنوبي) at 2:27 PM